I’ve found myself in numerous interesting conversations the past few years about what innovation actually is. The word seems to have taken a path akin to start-ups; it means a lot of different things to different people. Disruptive innovation is perhaps even more confused but I have learned that what many consider disruptive innovation I may not.

I’ve also learned the way disruptive innovation is currently carried out is nearly entirely for the sake of economic growth. And our system of growth in no way accounts for the cost to the environment or the exploitation of humans (and other species). No matter how we spin it, that’s a cost to our lives and way of living. Through these innovations we end up with products and services that are either cheaper to the option we were using in the first place (and then go on to create competitors which drive the entire new market into a downward spiral) and/or more convenient, playing to our twenty-first century wants of things we didn’t previously need, with ever-growing consequences on the other side of the equation.

Everybody who doesn’t disrupt deserves to die, is essentially the calling card of Silicon Valley.

Thanks to disruptive innovation we now have a whole host of jobs that work in innovation silos, incubators and accelerators. We have job titles such as “Chief Disruption Growth Officer” and “Innovation Catalyst” who spend their days providing very little value in a world where innovation has become its own industry. We play a lot of innovation theatre.

Innovation is supposed to create value and it does, but it’s nearly always convenience consumerism and economical. Many new products even value themselves based on the players they propose they’re disrupting. To be clear, there is definitely disruptive innovation of a certain definition. The industry you work in may well be “disrupted”. Not thinking about the future of work and what might be coming to develop a new market in your vertical, is a failure. Disruption to existing industries has happened long before there was a word for it and it will continue.

But – and it’s a big one – we are obsessed with causing disruption, and it’s creating countless other problems without ever addressing the most urgent of the ones we currently have, particularly when it comes to our ecological crisis and social issues. Our focus on innovation has led us astray from many more important problems. Innovation has not moved the needle on climate change (and arguably is what allowed us to get here). Innovation won’t resolve our inequity or poverty. Innovation hasn’t stopped millions of people experiencing homelessness. It hasn’t solved for social isolation either (it may be partly responsible for that too).

Innovation isn’t going to fix it. We can’t seem to decide whether Uber was a disruptive innovation or not (I’m on the not side), but nevertheless – and even though we all use it – it’s clearly caused mass issues (increased congestion, car ownership and pollution being some alongside labor issues and competition to better-for-the-environment public transport). Geoengineering would be disruptive too but I don’t want it.

What I want is disruptive transparency.

Given we manage to put the world’s best designers and technicians on destructive services, I don’t think it’s much to also want this easily accessible and designed for the common user. No overwhelm, no jargon, no confusion. I want our focus on transparency.

Disruptive transparency will actually go some way to solving our multiple crises. This level of transparency is rarely ever practiced but allows us to make better decisions. It will force a shift in systems. It creates accountability. It allows policy makers to design better policies. It gives a platform to people who need the data to educate their audience on it. It moves consumer choices. And at times it also ignites shame which can be a very effective tool in our society. Bring on the politicians wearing the logos of companies that sponsor them – or that they have vested financial interests in – on every outfit, every day; just like our sports stars.

Disruptive transparency undoubtedly creates innovation. Blockchain already is. Provenance has been working to build this transparency into supply chains. The Guardian and other analysts have been busy building bots and databases to create transparency in Australian politics (which continues to slide). Buffer is still busy developing and tweaking their models and services for radical transparency with their customers, investors and employees. Price transparency in the healthcare sector in the States is starting to lead to tools and policies.

Instead of focussing so solely on innovation, we can create the space where we default to transparency in which we also benefit from trust, justice and diversity, and then promote a work environment where innovation naturally thrives.

Design, if it is to be ecologically responsible and socially responsive, must be revolutionary and radical – Victor Papanek

Will this create a burden? In some cases, yes. But it also takes many resources to spin and obfuscate the truth – we can direct those to transparency instead. We can also decide that businesses should know their supply chains. It’s crazy that we walk around this world completely comfortable that they don’t, or that they do but don’t want to disclose them. They’re a burden on the environment and human rights. Knowing them, and forcing them with public pressure, law or regulation to be ethical, is less of a burden. The same goes for every political party and technological breakthrough.

It doesn’t need to be overnight. It’s a process. But we can all start today. At Nowhere & Everywhere we’re finally in Phase 2 of our environment label project. Internally we’re also working on expanding our Transparency section beyond that of the products we make to support a few rural projects. We want to have a page on everything we do so it’s clear. We’re also determining the exact price breakdown of each zero-waste product and we outline it in the sustainability & environment services we provide if you work with us.

Disruptive innovation creates an enormous set of complex problems. Disruptive transparency might just help us resolve some of the biggest we already have.

Disruptive transparency + ethical & sustainable design might actually lead us out of the mess. 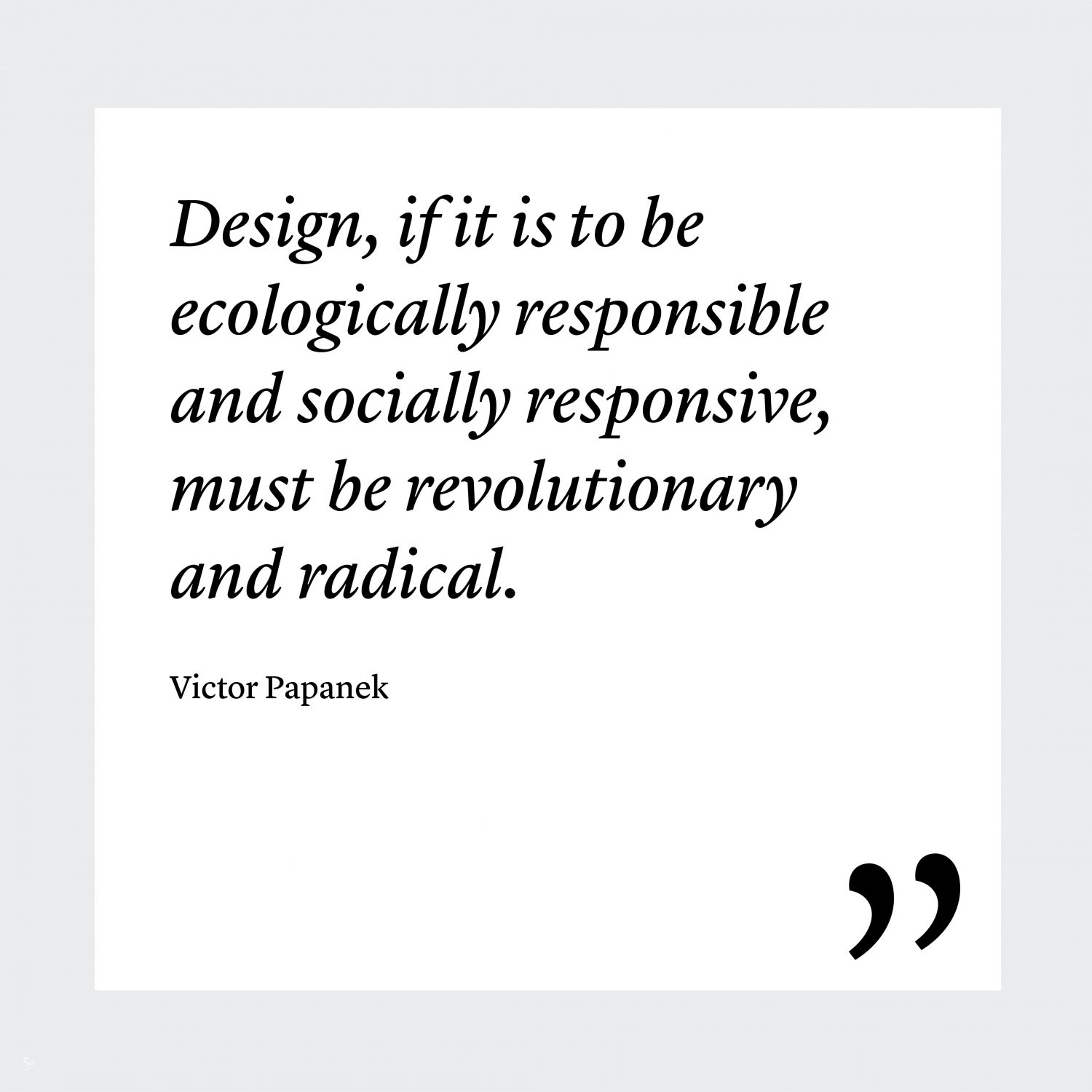 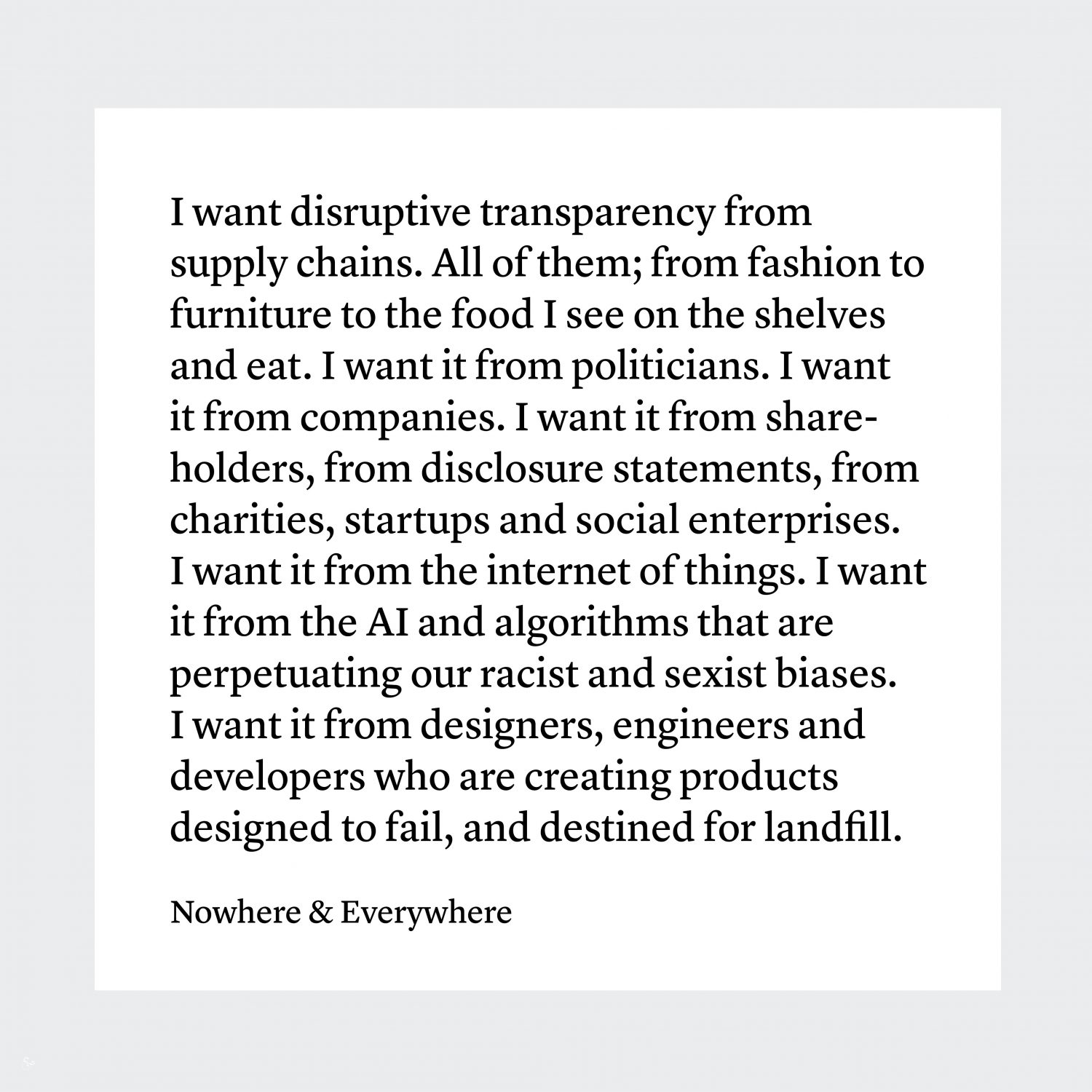 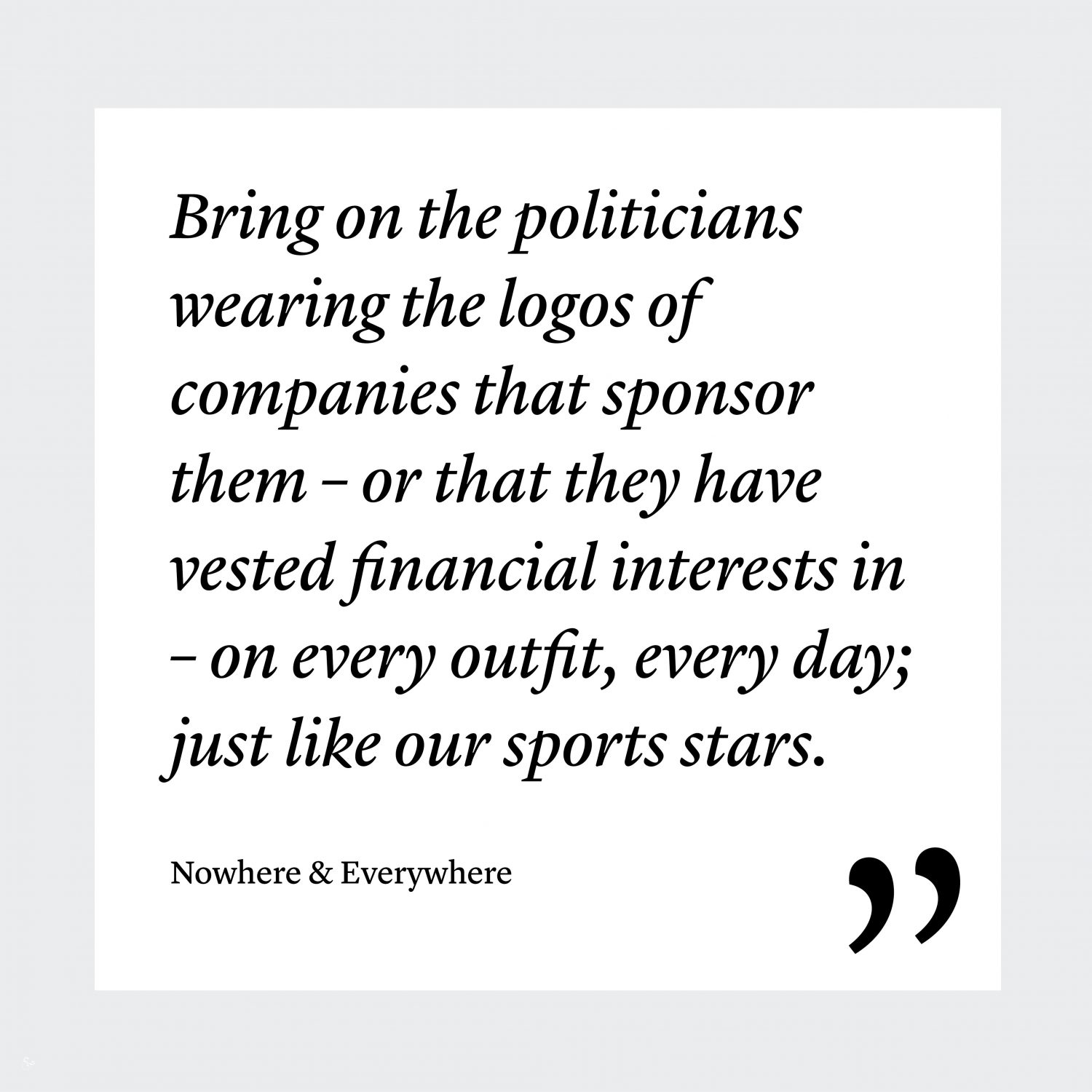