The plastic problem is not the fault of developing countries. - Nowhere & Everywhere

This is your problem.

It is all of ours.

I am tired of hearing, directly or with an undertone, how developing countries are largely responsible for the plastic pollution crisis. This is not even remotely true.

Before you offload your problem there (like we do with our rubbish), let’s start by thinking about how plastics got into our world in the first place.

The components of what we now know as plastic were beginning to be discovered (mostly accidentally) in the late 1800s, but it wasn’t until 1909 that a chemist in America named Leo Baekeland synthesized Bakelite from a mixture of phenol and formaldehyde. This was the first truly synthetic polymer. In 1946 Tupperware was invented and sold to the housewives of America (the Tupperware generation saw a huge increase in plastics). The plastics we interact with most today; those persistent single-use items, started in the 1960s when a Swedish company developed the first plastic bag. Though it took a while, in the 1980’s supermarkets started to pay attention. Once a few major stores had adopted it, the rest followed suit. Cheaper and stronger than paper bags, they were also waterproof and gained handles before their paper counterparts.

You can’t discuss the advent of plastics without talking about wars though (bet you didn’t think this is where it was going!). World War II drastically increased our use of the new materials of plastic. Synthetic plastic was an alternative to natural resources, it could be easily manufactured at scale and was much cheaper. Originally it was  considered environmentally friendly – particularly when it replaced the ivory trade for the likes of billboards. Nylon was invented in the 1930’s and in turn was used for tents, bags, body armor, parachutes, ropes and more. In the same time, Saran (cling film) was invented to protect military gear – it was then used for food packaging and to wrap near every product and item you can think of.

During World War II plastic production in the United States increased by 300%. After climbing out of the Great Depression and money circulating once again, these initial forays lead to the creation of many other plastics, like styrofoam, polystyrene, polyethylene and vinyl. 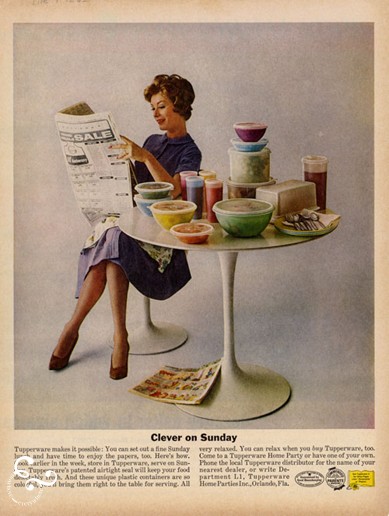 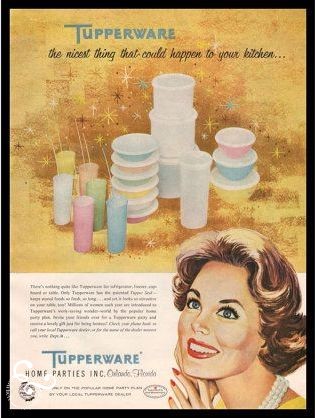 In the 1950s plastic sandwich bags with a little zipper were slowly making their way into the world for easy food storage.  Saving time was the new motto of the era. Post war families also loved television which in turn created television dinners. With the invention of the household microwave, the aluminium dinner trays were replaced with plastic in the 1980s. The decade before saw the explosion in plastic milk bottles and in the decade after the salad bag was introduced (we’d argue the Spice Girls was a much better gift to the 90s). In the early 2000s a whole new range of flexible plastic packaging was made to make food even more convenient.

Whilst the war offered an opportunity for plastic production to explode, wars in other countries held us all back environmentally. America dropping bombs on countries creating fertile ground for rebel groups (a la Cambodia, Afghanistan and Iraq) or utterly unnecessary wars (hello Vietnam) causes decades long suffering and genocide. Millions of people die. Trauma is inflicted and stays; without any option of recovery or therapy, ever. Environmentalism is naturally the least of people’s concerns (even though, despite some popular opinions, they do very much care). Whilst countries like America, Australia, the UK, Russia and all those whom support them in arms & troops create the issues and then remove themselves, they do so entirely without providing adequate support for funding, skills, education and infrastructure let alone any reparations. How can we possibly ask these countries to focus on something like plastic (or climate change) when they are still trying desperately to overcome hundreds of others hurdles and have to deal with dictatorships and authoritarian regimes that are there largely because of the intrusions?

But really, we need to take this even further back because most of our environmental issues start with colonization (which hasn’t ended). Yup we’re still responsible for that. Take Australia for example. Indigenous peoples there lived off the land responsibly for tens of thousands of years. Then along came white people and with them genocide and the total destruction of Australia’s environment. Many indigenous groups around Australia now clean up the coastlines of product waste and overfishing they will never use. The native peoples in America share a similar story. The tribes in the Amazon are now quite literally leaving their forests to demand action with anyone who will try to help protect the lands that were stolen from them and distributed to those who wanted to gain only economically. Outside of basic human morality, their presence there is the only thing that stops us destroying those areas at the moment.

I know you care deeply about the world. I know it pains you to look around the landscape and see it being littered. I know it breaks your heart to hear of yet another whale dying with a stomach filled with plastic. Yet another turtle unable to swim under the surface from plastic gases in their body. Yet another orangutan baby found without its mother from the horror of deforestation. Yet another species gone extinct. Close your eyes and imagine then how unbelievably painful it must be to be the owners of that land and watch it being purposefully, wilfully and swiftly destroyed around you. Your stories, your cultures, your animals, your mountains and river ways – all gone.

I often find it important to remember that outside of a few European nations – and even the best are not perfect by any measure – developed countries have not got this anywhere near sorted. Australia and England’s recycling industry is utter chaos and constantly teeters on collapse. America has an administration that has decided to plunder the Earth no matter the cost. Ausmerica continues in the spirit of climate change denying and inaction due to their far right-wing politics. The oil nation of Saudi is allowed to literally get away with murder and happily act as the polluters of the middle east.

To top this whole shin-dig off, the western world decided capitalism, fuelled by fossil fuels, was going to be the number one pursuit of everything and in turn had to drag along everyone else with it to maintain some kind of footing in the modern world. Even the aid delivered to developing economies focusses on turning their countries into what we have decided is the right way to be. Capitalism is of course the key destroyer of the environment. Short term economics do not make for good conservation and a fast-paced society where nobody has any time has created a throw-away culture of convenience. We insist that economic growth will simply continue despite our globe having finite resources, and our extraction from it constantly increasing. Societies like this also not only allow, but encourage, things like plastic. Plastic is now so insanely cheap it has, like many products of it’s type, no calculation in the cost at all of how much it has taken from us.

The price of plastic in no way equates the true cost of it.

And that brings us full circle in a way we only wished our economy would go (get the clever environmental pun there?).

We created these issues and we thrust them upon other nations. These weren’t our direct doing but we actively participated in the system that allowed them to flourish – and one we benefited from enormously. Just because you can’t see your plastic, doesn’t mean it’s not there. I will reiterate time and time again that if we stopped waste services for a mere month in developed countries we would find ourselves in utter anarchy with no idea what to do.

Our responsibility here is to do our part in our own lives as much as humanly possible, even when it’s hard. It is to take every effort and step you can to reduce your waste and limit your impact on the environment across multiple angles. It is to demand a responsible & sustainable end of life for products and a circular economy and refuse to buy from major companies who are complicit. It is to call our senators and write to our local politicians and speak to our family, friends and colleagues about it. It is to vote for campaign finance laws & advocate for the end of constant industry lobbying. It is to actively support foreign aid budgets and government measures for environmental infrastructure funding in developing countries and help and buy from organizations that are trying their darndest to help out on local and global levels whether via policy, activism or on the ground. And it is to advocate for environmental justice and point out the ethics, immorality and hypocrisy otherwise.

We can do this, but we are all in it together and me must move and help each other.

Do not be daunted by the enormity of the world’s grief.
Do justly now.
Love mercy now.
Walk humbly now.
You are not obligated to complete the work, but neither are you free to abandon it.
The Talmud