Need one more reason to march at the global climate strikes? - Nowhere & Everywhere

Need one more reason to march at the global climate strikes? Between the Copenhagen and Paris climate conferences, the number of billionaires on the Forbes list with interests in the fossil fuel industry rose from 54 people in 2010 to 88 in 2015 whilst their combined fortuned increased by $100 billion in the same period.⁠
⁠
Let’s also remember that just two people in America – the Koch brothers – were able to wield such an enormous amount of power across the government and climate denying factions (often through their ‘think tank’ the Cato institute) that they changed the mindset of Republicans from generally accepting and talking about global warming, to being dead-set against any climate change science. Throw in a few a major oil & gas companies who knew exactly what was happening and funded everything & everyone to look the other way, and you’ve got a potent mix. ⁠
⁠
Lobbying and corruption have an enormous return on investment in government and it needs to stop. We’ve long wished politicians wore logos of the companies that funded them, received extra meetings with them, had consultants installed in their departments, and offered them jobs after their service, just like sports people wear their sponsors in public. ⁠
⁠
One more reason to march – governments work with, and for, all of us and a safe future.⁠
⁠
Quick watch: Meet the Rich – The Koch Brothers (Samantha Bee, Full Frontal on Youtube) and Patriot Act – Why Your Public Transportation Sucks (Hasan Minhaj on Youtube & Netflix)⁠
⁠
Data: Oxfam & Forbes 2015⁠
⁠ 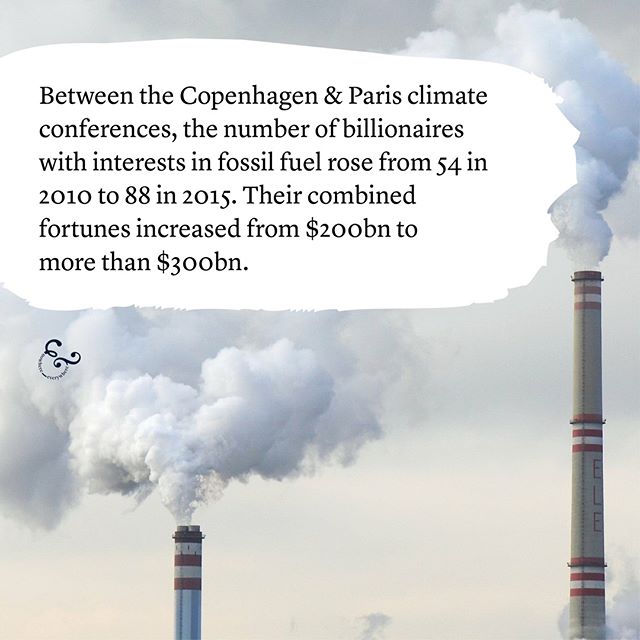