The Netherlands & Denmark are our big neighborhood cycling nations in the world. In both countries politicians can be found riding to work (that’s the Dutch PM in the photo) and even royalty does. Makes all these people a lot more normal too. Riding a bike is pretty much the first thing you learn alongside walking. ⁠
⁠
In a “Mini-Holland” scheme in outer London boroughs, research found that after one year, people living in these boroughs were walking and cycling for 41 minutes a week more than those living in comparable areas. Among the most notable elements of the study, is that while the schemes were primarily created to boost cycling, the bigger increase came on foot, though proportionally it was a 13% rise for walking and an 18% increase for cycling. The neighborhoods still had work to do on reducing car travel times but it’s something to aim toward.⁠
⁠
In the Netherlands, a quarter of the population cycles every day. This was by design – it started with activists and it’s taken an enormous amount of infrastructure, regulation and cultural change to make this happen. If you youtube a video called “How the Dutch got their cycle paths” you’ll get a great quick, glimpse into some of it!⁠
⁠
It’s good for our environment, our health, neighborhoods and our happiness. If you can jump on your bike or walk to get somewhere, let’s all do it more often. Our tip too: landfills are absolutely filled with bikes. A number of these have resale stores so see if you can pick one up from there and fix it up (gift more away to those who don’t have the resources if you have this skill!) or jump on a community secondhand site online to get one. You’re double winning. We definitely vote for upright bikes with baskets and carriers for the groceries 🙂 ⁠ 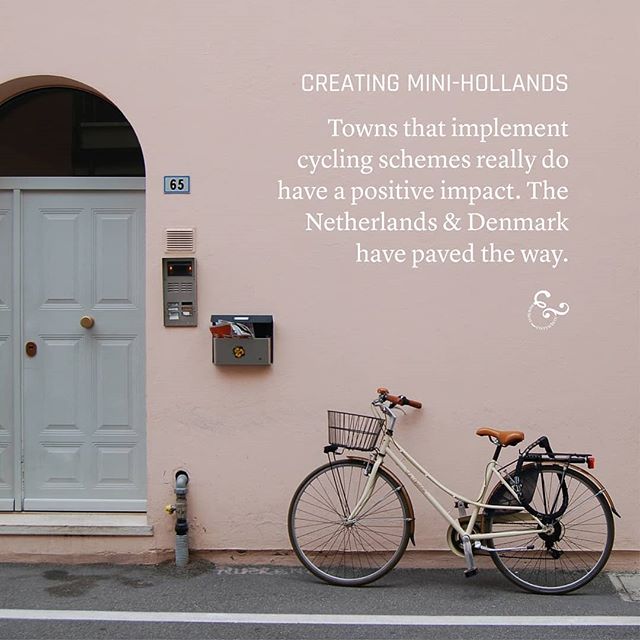