Vanuata has a plan to ban disposable diapers - Nowhere & Everywhere

Vanuatu, whose population of almost 300,000 are spread across 65 islands, is a leader in the global fight against plastic waste. It has already introduced one of the toughest single-use plastic bans in the world (including straws and polystyrene containers), and has now proposed a ban on disposable diapers, to be phased in at the end of this year.⁠
⁠
Vanuatu has also banned other single-use plastic items including plates, cups, stirrers, food containers, egg cartons and flowers. Banning nappies isn’t a terrible idea. Over time it’s cheaper to use reusable diapers. It creates far less landfill and waterway waste. It reduces fossil fuels as it takes about one cup of crude oil to make each nappy. Anecdotal evidence shows children who use cloth nappies may toilet train quicker too. In Australia & NZ a staggering 3.75 million disposable nappies are used each day. In the US, it’s estimated that 20 billion disposable diapers end up in landfills each year. In the UK they estimate three billion a year. ⁠
⁠
The proposal has been contentious, with uproar among parents but the government, which is already suffering from the climate and ecological emergency, with rising sea levels and marine pollution, said it had no choice.⁠
⁠
“Vanuatu is safeguarding its future,” said Mike Masauvakalo of the ministry of foreign affairs. “Eventually, plastics find their way into the water and the food chain and at the end of the day, the people of Vanuatu end up consuming them. It is a long road ahead, but knowing my country, we will work it out. Vanuatu is very vocal about the climate emergency. It is visible, we are living it. It is affecting our food supply and our fish populations.” 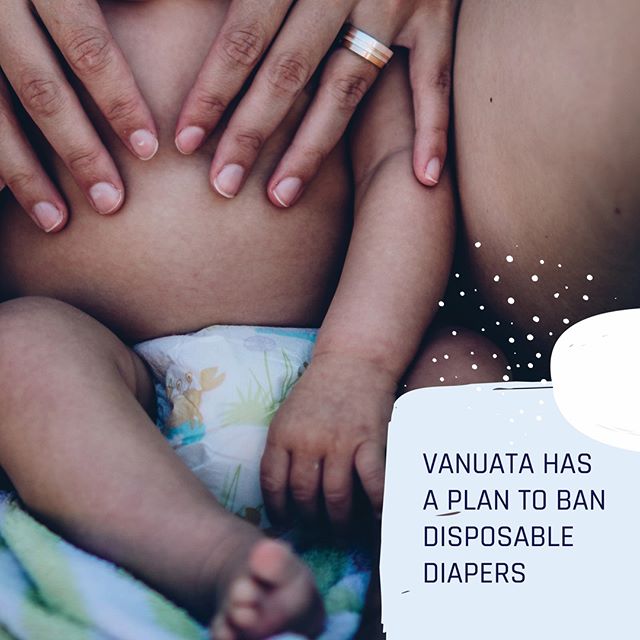