When we were working on @skwoodlekids last year, we had an incredible anti-oppression & bias consultant to aid us in our work (we’re a tiny project but we would encourage every organization to pay for this). We had a poster for kids originally titled, help save our world. Our consultant pointed out that this plays squarely into white savourism and that we aren’t saving the world. We’re not going to ride in on a white horse, save it, and give ourselves a pat on the back.⁠
⁠
We thought about this a lot. Of course we aren’t. The Earth itself has withstood meteorites, volcanic eruptions & mass extinctions numerous times before over billions of years. We humans might single-handedly wipe out a million species, including homo-sapiens, but the Earth will keep spinning and fostering life (until the sun swallows it up). ⁠
⁠
We’re not saving the world, we’re protecting the Earth from ourselves. It is our destruction that caused – and perpetuates – these issues. And more than that, any measure we take to protect our world is in order to protect our own species. We need healthy ecosystems & biodiversity to currently survive. At this point we are simply protecting ourselves from ourselves. We’re protecting ourselves from the impacts of white colonization & industrialization.⁠
⁠
It’s eye-opening to realize how much the ‘save the world’ message has been embedded in us throughout the past few decades and how much it continues on. The image of environmentalism has become an image of whiteness rather than what has been long known; First Nations people have lived sustainably with the land for tens of thousands of years and communities of color generally use far fewer resources whilst bearing the burden of privileged consumption. What we could very much stand to learn is that we’re not here to “make a difference”. We should first do no harm.⁠
⁠
Saying we’re going to save the world is a bit like contributing to the problems in another country that exacerbate poverty, inequality & the climate crisis (like overconsumption) and then sending a few dollars when a climate-change induced drought threatens the lives of millions there.⁠
⁠
Let’s be careful with these words. 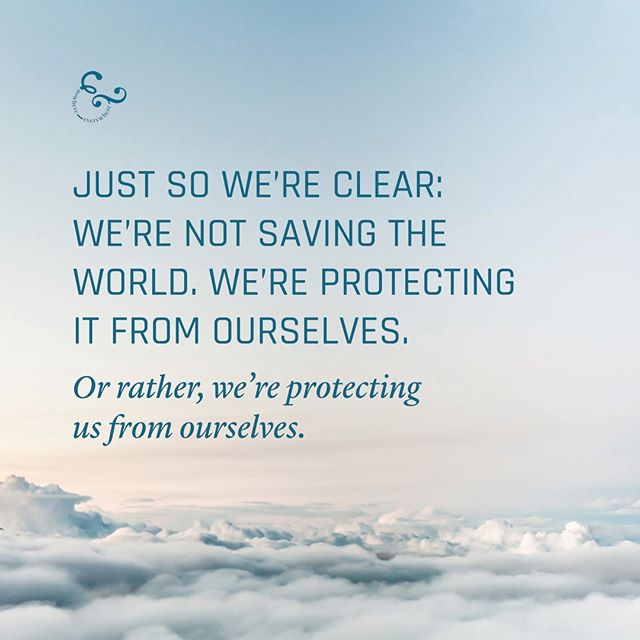