What happened to the Aral Sea? - Nowhere & Everywhere

Once the fourth largest lake in the world, the shrinking Aral Sea in Central Asia has reached a new low, thanks to decades-old water diversions for irrigation and a more recent drought. Satellite imagery released by NASA shows that the eastern basin is now completely dry. The Aral Sea (which is actually a freshwater lake) once had a surface area of 67,300 square kilometers (26,000 square miles). It had long been home to prosperous towns and supported a lucrative muskrat pelt industry and thriving fishery, providing 40,000 jobs and supplied the Soviet Union with a sixth of its fish catch.⁠
⁠
The Aral Sea was fed by two of Central Asia’s mightiest rivers, the Amu Darya and the Syr Darya. In the 1960s, Soviet engineers built an enormous irrigation network though, including 20,000 miles of canals, 45 dams, and more than 80 reservoirs, all to irrigate sprawling fields of cotton and wheat in Kazakhstan and Uzbekistan.⁠
⁠
In the decades that followed, the Aral Sea was reduced to a handful of small lakes, with a combined volume that was one-tenth the original lake’s size and that had much higher salinity, due to all the evaporation. As a result of the drying over the past decades, millions of fish died, coastlines receded miles from towns, and those few people who remained were plagued by dust storms that contained the toxic residue of industrial agriculture and weapons testing in the area.⁠
⁠
Source: National Geographic⁠
Photo: NASA 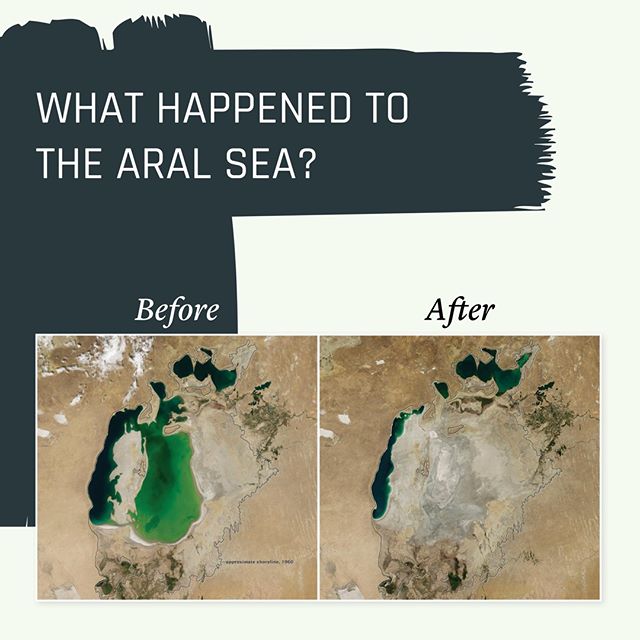