1/ California’s wildfires are hardly natural – humans made them worse at every step. We fuel them. We build next to them. We ignite them.  Fires in 2018 are 30 percent larger than the average over the past decade, making this year far worse than most in recent memory. This summer also brought wildfires in Europe, from as far north as the Arctic Circle to as far south as the Mediterranean Coast. The NIFC reports that this year, wildfires have burned more than 5.6 million acres, about 27 percent above the average since 2008. At the moment, 15 states are reporting large fires, from Alaska to New Mexico. (Vox 1 / Vox 2)

2/ Tax havens shielding companies responsible for deforestation and over-fishing. A new report finds 70% of vessels implicated in illegal, unreported or unregulated fishing are registered in tax havens. Money channeled through secretive tax havens has been used to fuel deforestation in the Amazon and illegal fishing around the world, racking up a heavy environmental toll but leaving few ways for businesses to be held to account. (The Guardian)

3/ Palm oil: A new threat to Africa’s monkeys and apes? Large-scale expansion of palm oil in Africa will very likely risk the lives of primates, a study finds. (BBC)

4/ Scotland’s mountain hare population is at just 1% of 1950s level. Culling and loss of moorland in favor of conifer forests blamed for severe decline in wildlife. The number of mountain hares on moorlands in the eastern Scottish Highlands has fallen to less than 1% of the level recorded more than 60 years ago, according to a long-term study. (The Guardian)

5/ Two huge Antarctic glaciers are losing much more ice than we thought. Two huge glaciers in east Antarctica have been losing mass rapidly since 2002. The finding means that our forecasts for sea level rise this century will have to be revised upward, but it’s not clear by how much. It is also further evidence that the ice in east Antarctica, which had long been thought to be stable even in the face of climate change, is in fact melting. (New Scientist)

6/ Almost every species of lemur, wide-eyed primates unique to Madagascar, is under threat of extinction. The Primate Specialist Group reviewed and compared the latest research into lemur populations and the threats to their habitat and survival. Lemurs, they concluded, are the most endangered primates in the world. (BBC)

7/ Because this administration hates the environment the Trump team has rescinded an Obama-era ban on the use of pesticides linked to declining bee populations and the cultivation of genetically modified crops in dozens of national wildlife refuges where farming is permitted. Environmentalists say lifting the restriction poses a grave threat to pollinating insects. And we really need the bees. (The Independent / Guardian) 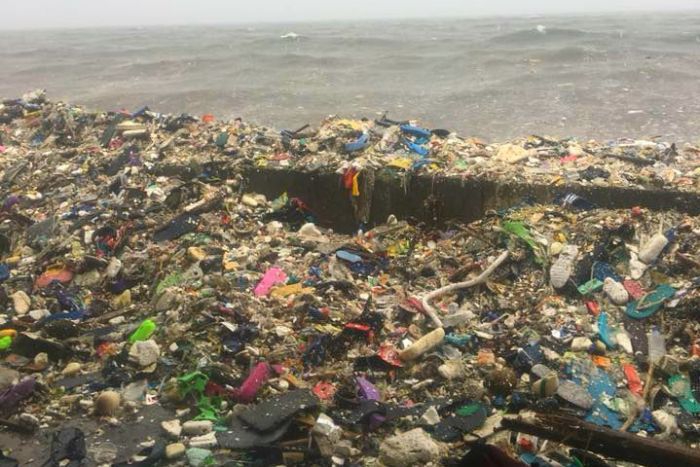 Waves of garbage are washing ashore in the Philippines. Massive piles of swirling trash are seen crashing into the Manila Bay breakwater as debris is sent metres into the air in dramatic footage captured by student environmental activists. (ABC)

8/ New Zealand is the latest country to ban the bag at a government level. People in New Zealand currently use about 150 plastic bags each a year, but the country now plans to phase them out within the next six months. As far as this region goes, Australia continues to lag behind. (CNN)

9/ Wave power start-up gets €3m in EU funding. A Danish-led project to produce electricity and fresh water from wave power has been awarded the maximum €3m in support under a European Commission scheme to help firms bring their technology onto the market quickly. (ENDS)

11/ Clean energy is catching up to natural gas. The natural gas “bridge” to sustainability may be shorter than expected. For around 10 years, the conventional wisdom in the energy sector has been that natural gas is ascendant. Coal is dirty, and it’s getting expensive, but it’s too early to jump all the way to renewable energy. To get from the fossil fuel present to the renewable future, we will need a bridge. (Vox)