1/ The Trump administration is reportedly pushing to open up Alaska’s Tongass National Forest, the world’s largest intact temperate rainforest, to logging, mining, and energy extraction. Just before leaving office, Bill Clinton signed off on one of his most important conservation initiatives. Known as the Roadless Rule, it effectively barred logging, mining and other commercial development on more than half of Tongas meaning that just about all the forest would be protected, since Congress had already designated most of the remainder as permanent wilderness. It is not clear why Mr. Trump is doing this, apart from wanting to make Alaska’s Republican leaders happy. The economic gains would be uncertain at best. (Washington Post / Slate / NYT)

2/ Unless there are serious cuts to man-made greenhouse gas emissions, at least 30 per cent of the northern hemisphere’s surface permafrost could thaw within just 80 years. The findings come from the UN’s Intergovernmental Panel on Climate Change (IPCC) and is a “special report” on oceans and the Earth’s frozen zones. The damage caused by catastrophic “superstorms” combined with rising sea levels could increase by a hundred-fold or more, displacing hundreds of millions of people from coastlines around the world. The draft report is fourth to call for radical action to tackle environmental disaster. (Independent)

3/ The UK is failing to meet its international obligations to protect its most important wildlife sites and vulnerable species, and now lags behind most other EU countries on key criteria. The draft data show 82% of the UK’s designated habitats to be in “bad” or “poor” condition, unchanged from the last reporting period of 2007-12. The percentage in a “bad” state was 71%, compared with 36% in Germany and 32% in France. The report also shows 64% of species assessed as being in either “bad”, “poor” or “unknown” condition, up from 57% in 2007-12. (The Guardian)

4/ A new study shows acid oceans are shrinking plankton, fuelling faster climate change. Phytoplankton use photosynthesis to turn carbon in the atmosphere into carbon in their bodies. Many species affected are also an important component of the diet of the Antarctic krill, which is central to the Antarctic marine food web. (The Conversation)

5/ The Trump administration laid out a far-reaching plan to cut back on the regulation of methane emissions, a major contributor to climate change. The Environmental Protection Agency’s proposed rule aims to eliminate federal requirements that oil and gas companies install technology to detect and fix methane leaks from wells, pipelines and storage facilities. E.P.A. officials said the new methane rule, which would replace one from the Obama administration, is a response to Mr. Trump’s calls to trim regulations that impede economic growth. By some estimates, methane has 80 times the heat-trapping power of carbon dioxide in the first 20 years in the atmosphere. (NYT)

6/ Forests in South China have been increasingly replaced by monoculture eucalyptus plantations grown for wood fibre for the pulp and paper industry. Even forests under official protection haven’t been spared. “Eucalyptus is bad news. It is allelopathic so it is difficult for other things to grow under it because it basically makes the soil toxic, and then it has huge water consumption. So the footprint of it can be much wider than the plantation itself. It is an ecological wasteland, basically.” (Mongabay)

7/ The outlook for the Great Barrier Reef has deteriorated from poor to very poor according to an exhaustive government report that warns the window of opportunity to improve the natural wonder’s future “is now”. The report published every five years, finds coral reefs have declined to a very poor condition and there is widespread habitat loss and degradation affecting fish, turtles and seabirds. It warns the plight of the reef will not improve unless there is urgent national and global action to address the climate crisis. Other major threats include farming pollution, coastal development and human use, such as illegal fishing. A separate report card on the condition of inshore reefs released by the federal and state governments rated their condition in 2017-18 as a “D”, largely due to poor water quality driven by land management practices including farming. “Overall, there is very little good to report whatsoever”. (The Guardian)

8/ Australia’s greenhouse gas emissions continue to rise despite the government claiming it is taking “sensible, responsible action” to address the climate crisis. Total national emissions have increased each year since the government abolished a national carbon price in 2014. The report shows emissions increased in most parts of the economy. Government projections showed emissions were expected to increase until 2030 under current policies. (The Guardian)

9/ It turns out that a mysterious recent spike in global methane levels that’s putting climate targets at risk may be coming from US oil and gas fracking. If that’s true, it’s bad news, because there’s lots more shale gas development in the pipeline and the Trump administration has proposed a rule rolling back regulations on the industry. There is every indication that shale gas emissions are higher than generally estimated and set to keep rising. The industry seems poised for enormous expansion. (Vox)

10/ A number of species have been given extra protections at the CITES conference. Nine animals received increased protections from international trade, and more than 130 species won protections for the first time at a two-week summit. Countries have agreed to strengthen protections for 18 threatened species of sharks and rays. A demand for shark fin soup is one of the driving factors in the depleting numbers of sharks in the ocean. Although 102 countries voted in favour of the move, 40 – including China, Iceland, Japan, Malaysia and New Zealand – opposed it. Two popular otter species will also be banned for trade. Giraffes are receiving some new protection. The new CITES listing won’t ban the trade in giraffe parts, but it will for the first time provide critical measures to track and trace this trade, which in turn should produce the data needed to further protect this imperiled species in the future. A near-total ban on taking baby African elephants from the wild and selling them to zoos has also been approved. The exotic pet trade is putting an increasing strain on dozens of threatened species.(BBC / National Geographic / The Guardian / BBC 2 / Mongabay)

11/ Cuba has introduced sweeping reforms of its fishing laws in a move seen as smoothing the way for possible collaboration with the US on protecting their shared ocean. Cuban waters provide spawning grounds for species of snapper, grouper and other commercially important reef fish in the US. Maintaining healthy numbers of bonefish, a lucrative game fish in south Florida, for example, depends on protecting the species in Cuban waters. The reforms are Cuba’s first major overhaul of fishing laws for more than 20 years and a major step for preservation of some of the world’s most important marine ecosystems.  (The Guardian)

12/ The share of coal in the UK’s electricity system has fallen to record lows in recent months, according to government data. The amount of coal used to power the electricity grid fell by almost two-thirds compared with the same months last year. So far this year the UK has gone more than 3,000 hours (125 days) without using coal for power – nearly five times more than the whole of 2017. (The Guardian) 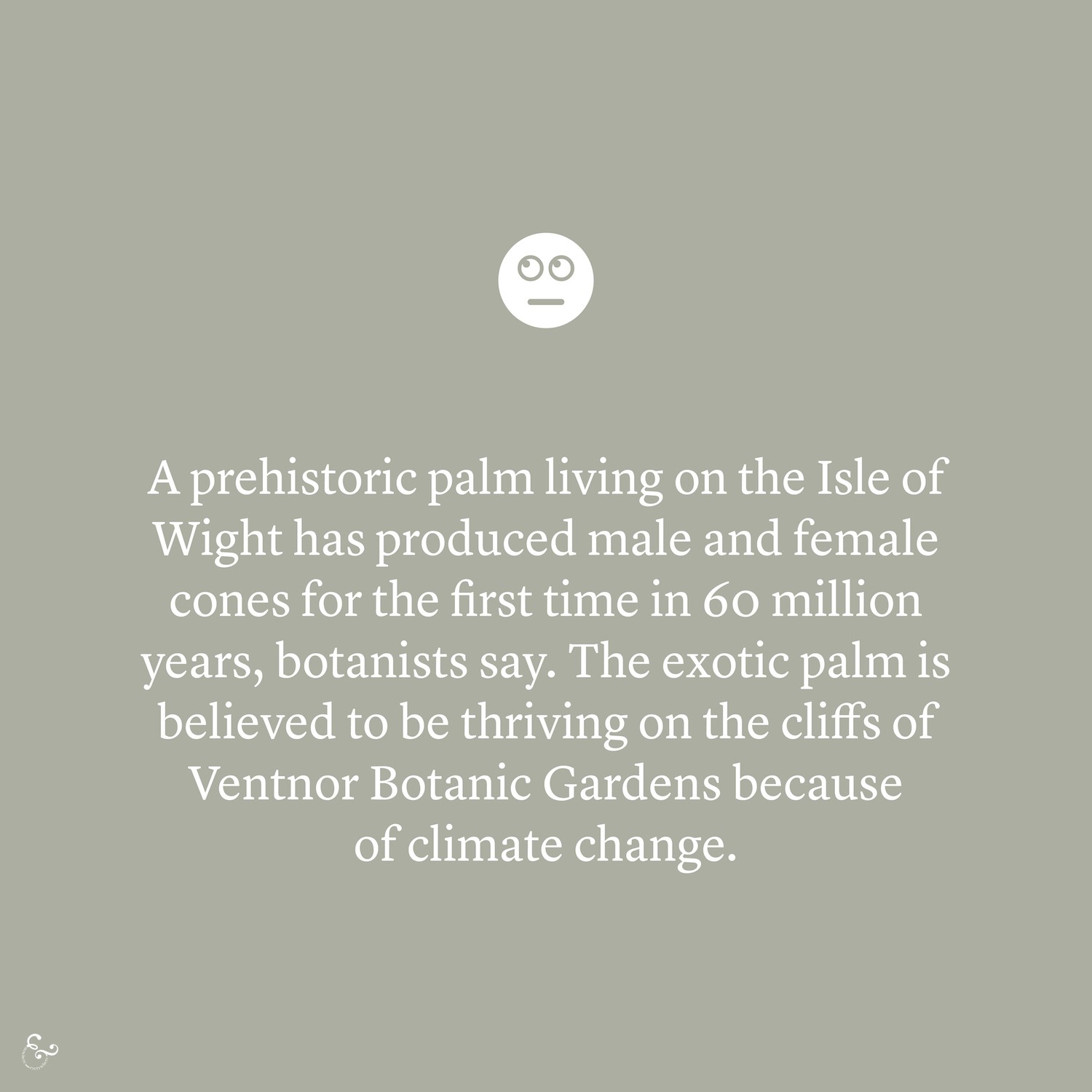 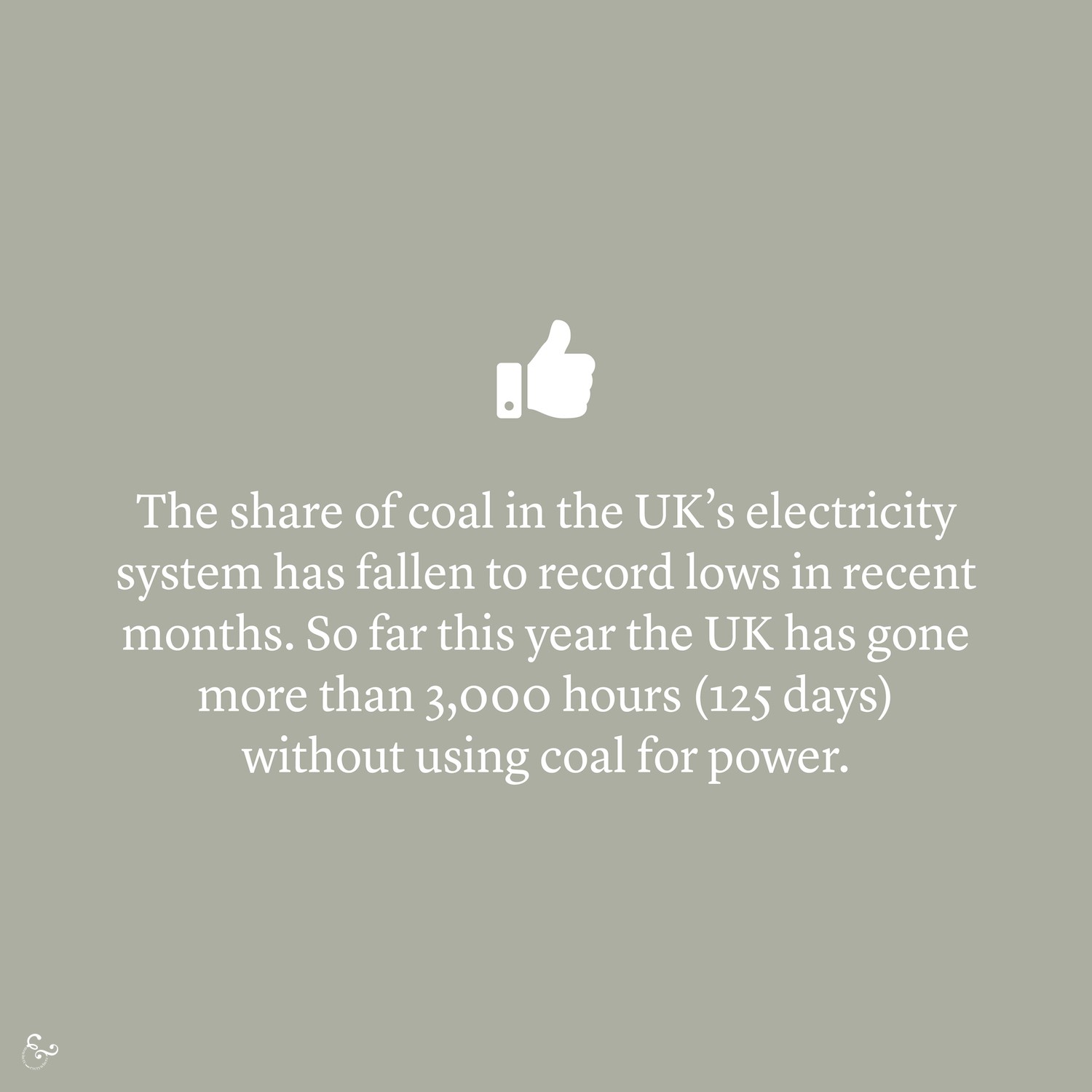 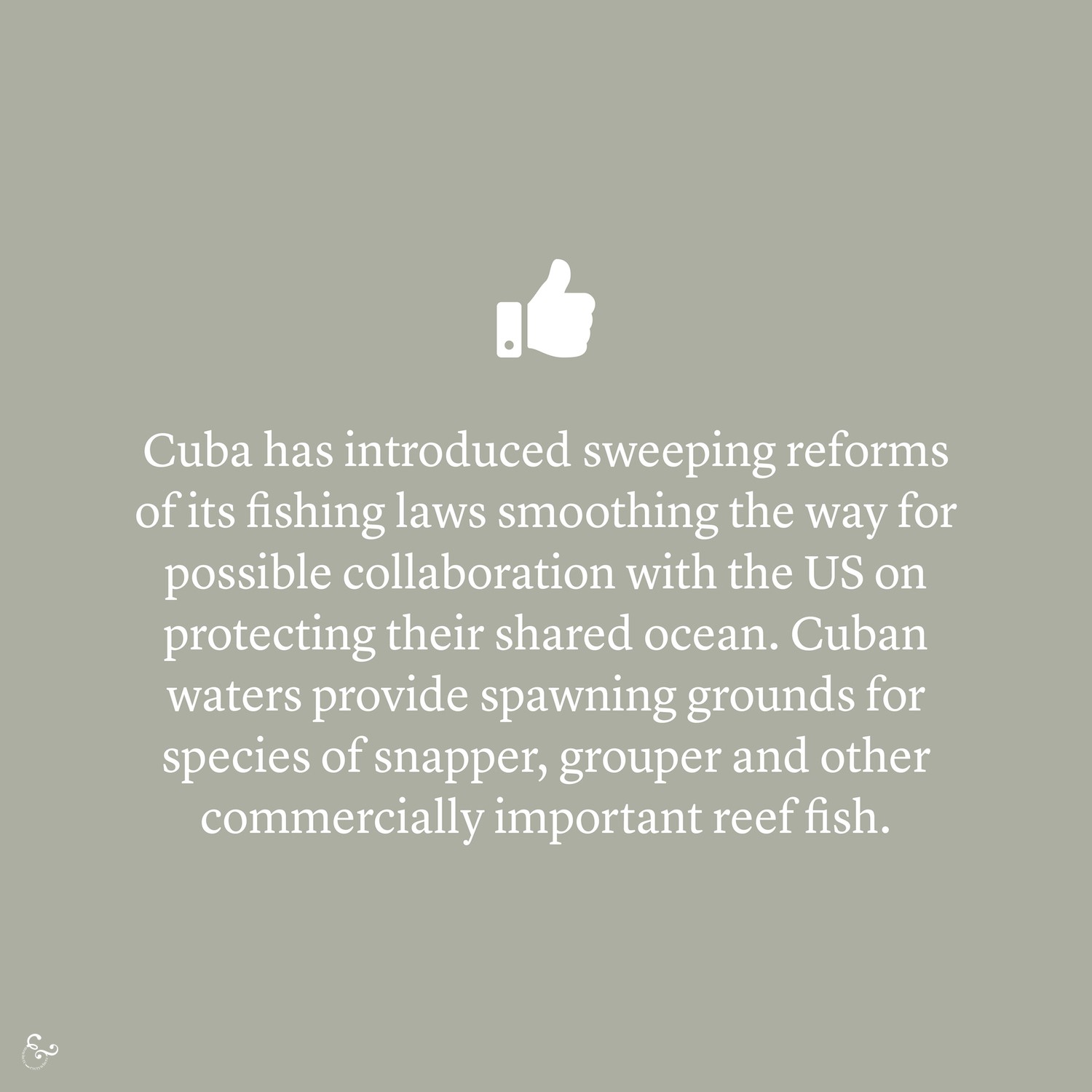 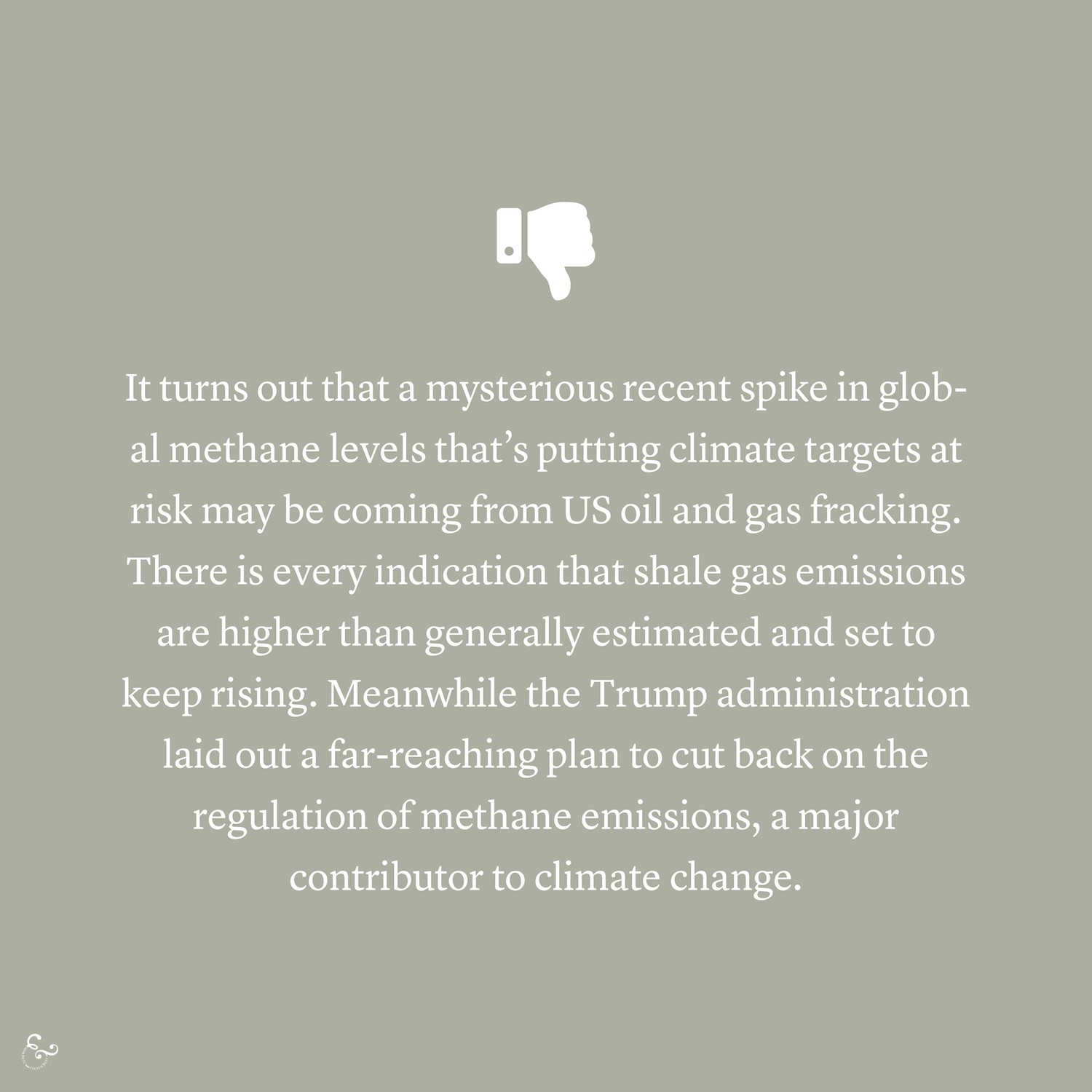 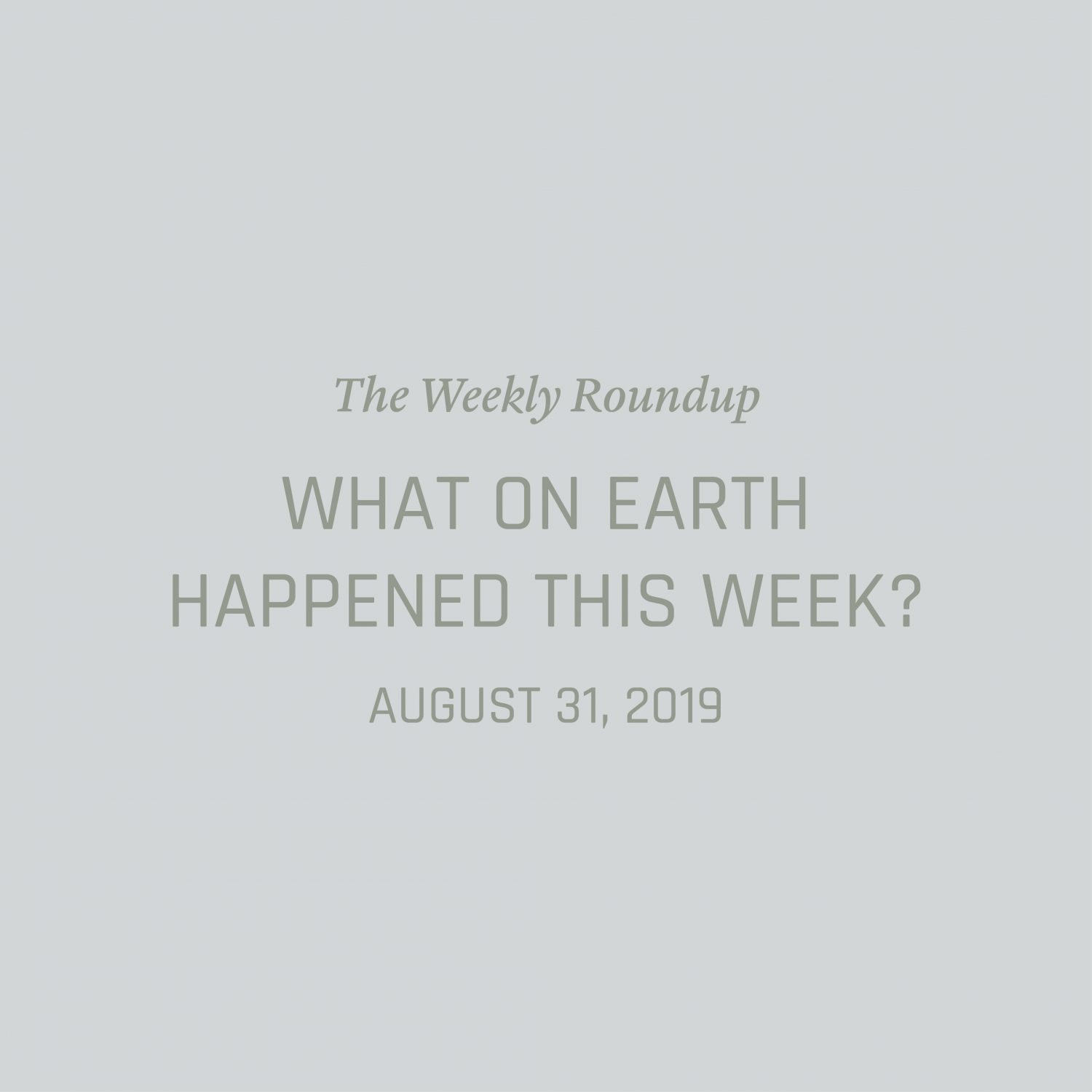 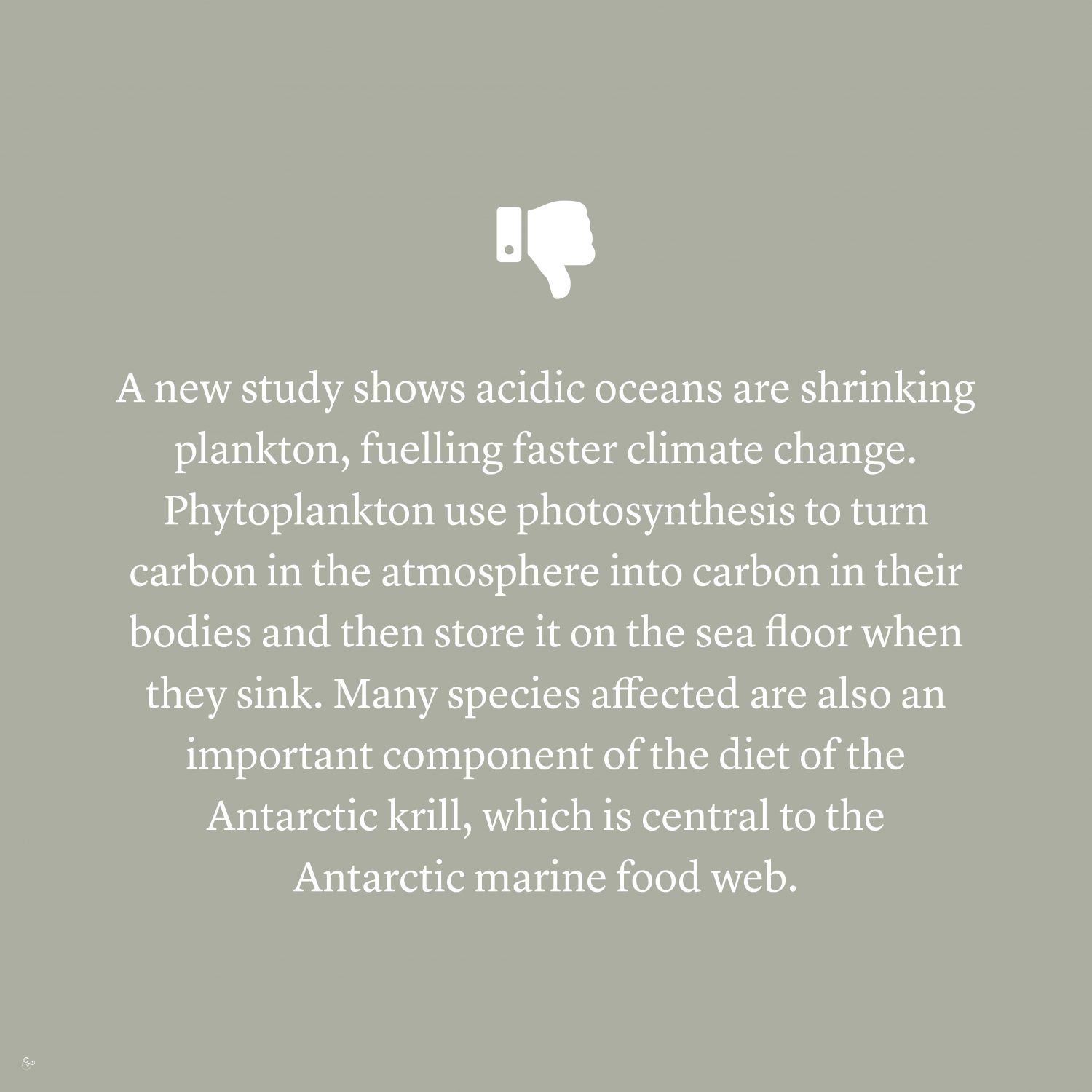 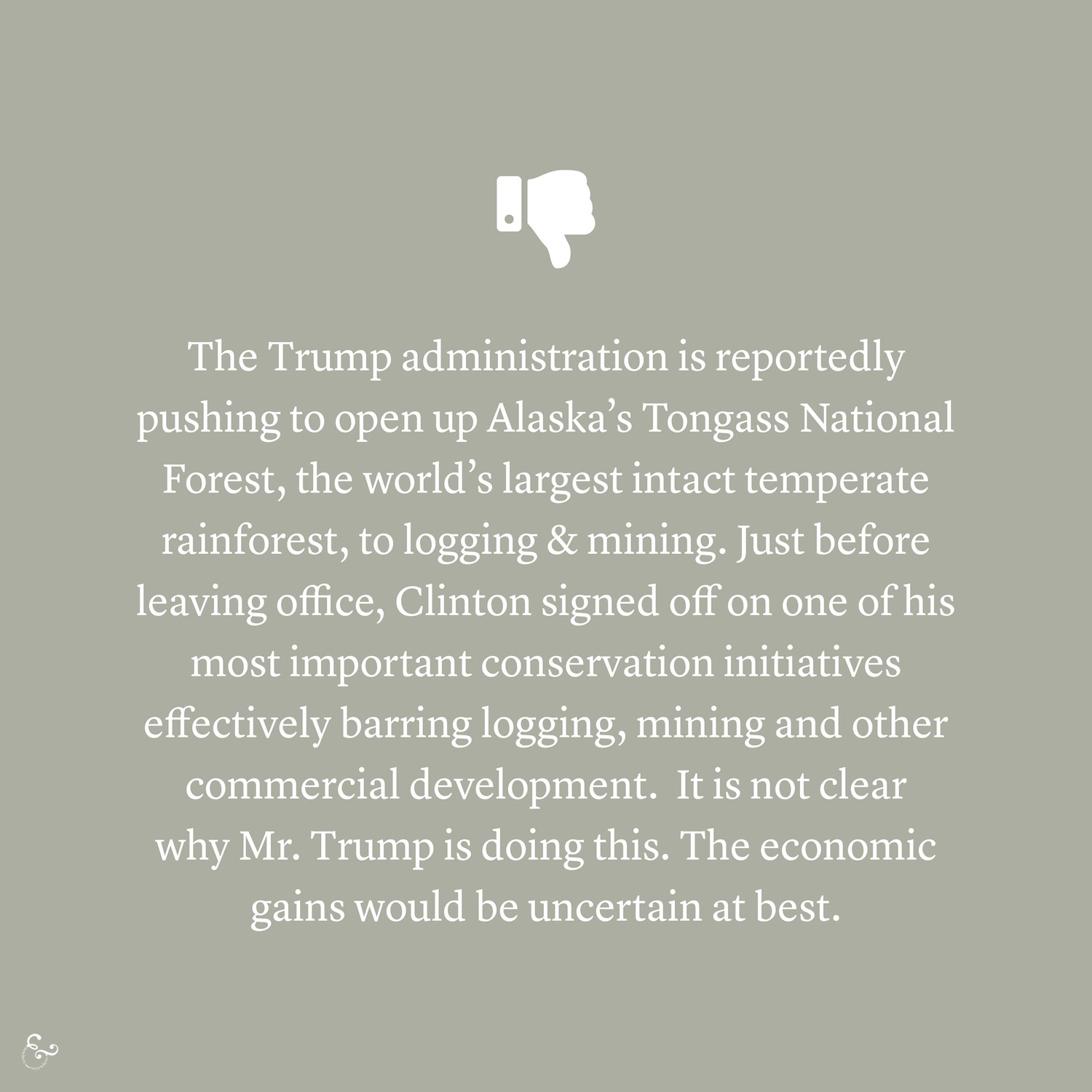 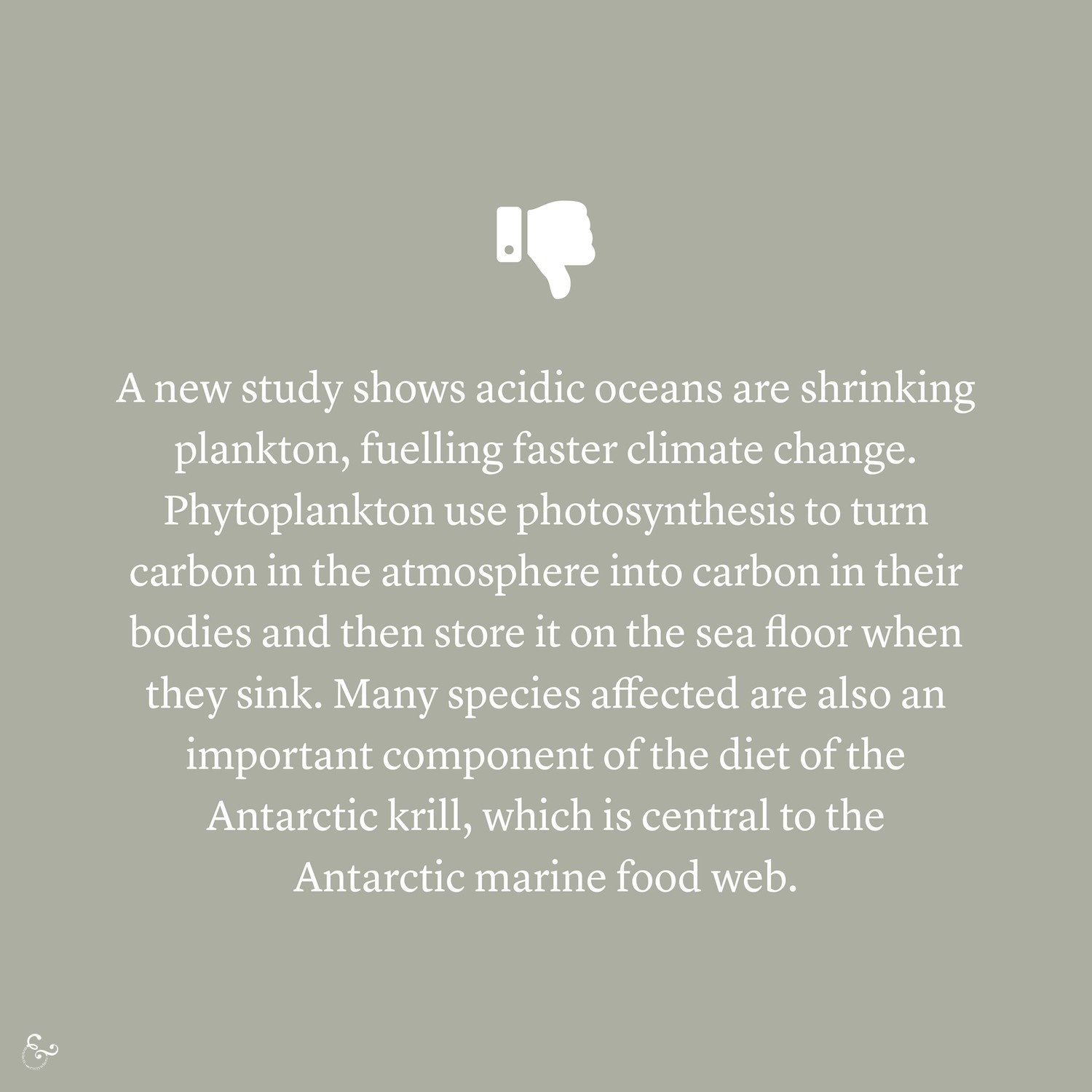