1/ The concentration of carbon dioxide in the atmosphere has increased by the second highest annual rise in the past six decades, according to new data. Scientists have warned for more than a decade that concentrations of more than 450ppm risk triggering extreme weather events and temperature rises as high as 2C, beyond which the effects of global heating are likely to become catastrophic and irreversible. Atmospheric concentrations of the greenhouse gas were 414.8 parts per million in May, which was 3.5ppm higher than the same time last year. May is the most significant month for global carbon dioxide concentrations because it is the peak value for the year, before the growth of vegetation in the northern hemisphere starts to absorb the gas from the air. As recently as the 1990s, the average annual growth rate was about 1.5ppm, but in the past decade that has accelerated. The last time Earth’s atmosphere contained the amount of carbon dioxide present today—during the Pliocene Epoch of 2.6 to 5.3 million years ago—Antarctica was a plant-covered oasis, sea levels were an estimated 10 to 20 meters higher, and global temperatures were an average of 2 to 3 degrees Celsius warmer. (The Guardian / Grist / Smithsonian)

2/ US government scientists have launched an investigation what has caused the deaths of an unusually high number of gray whales found washed up on the west coast of North America. About 70 whales have been found dead so far this year on the coasts of California, Oregon, Washington and Alaska, the most since 2000. Scientists believe that is a very small fraction of the total number of whales that have died because most simply sink and others wash up in such remote areas they are not recorded. In an average year, about 35 whales wash up in the US. (The Guardian)

3/ Coal generation has continued to plummet in 2019 in the US but natural gas generation increased to meet rising electricity demand, offsetting the emissions reductions associated with coal. The slow pace of reductions speaks to the need for stronger climate regulation. (Scientific American)

4/ The North American Great Lakes contain about one-fifth of the world’s surface fresh water. In May, new high water level records were set on Lakes Erie and Superior, and there has been widespread flooding across Lake Ontario for the second time in three years. As researchers specializing in hydrology and climate science, we believe rapid transitions between extreme high and low water levels in the Great Lakes represent the “new normal.” (The Conversation)

5/ The average person eats at least 50,000 particles of microplastic a year and breathes in a similar quantity, according to the first study to estimate human ingestion of plastic pollution. The true number is likely to be many times higher, as only a small number of foods and drinks have been analysed for plastic contamination. The scientists reported that drinking a lot of bottled water drastically increased the particles consumed. Most food and drink types have not been tested, however, meaning the study only assessed 15% of calorie intake. Scientists do not know what happens when microplastics are inhaled. (The Guardian / Independent)

6/ Anela Choy, a biological oceanographer, had been noticing something odd while studying the diets of tuna and other deep-diving fish. Though they lived at average depths of 1,000ft, their stomachs routinely contained bottle caps, trash bags, and light sticks. That led to a study in California and new findings reveal a proliferation of microplastic particles, the tiny fragments left over when larger plastics break down. Most remarkably, the highest concentrations of microplastics were found about 200-300 meters down – four times more plastic than was found in samples at the surface. That’s on par, or higher, with quantities found at the surface of the Great Pacific Garbage Patch. (The Guardian / NPR)

We’re passing a whole lot of records we never wanted to get to. 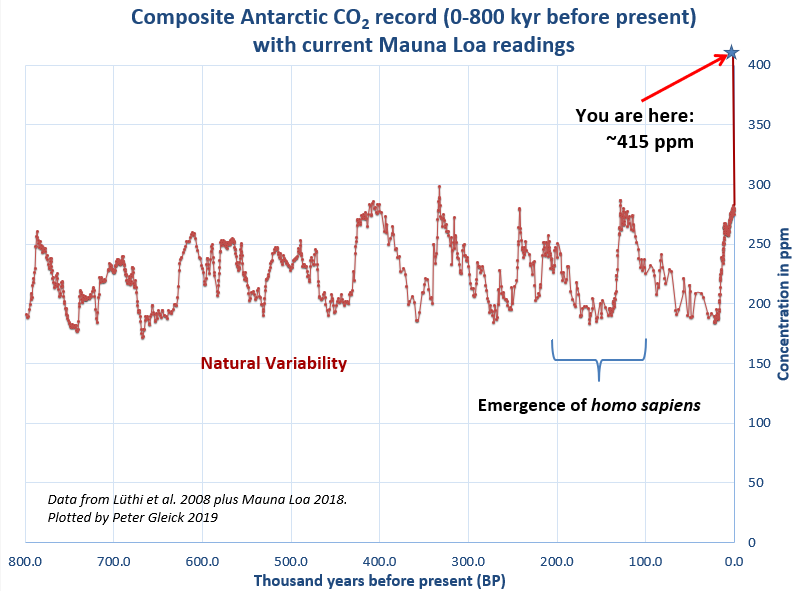 7/ Twenty-one youth activists faced off with the US government in an Oregon courthouse on Tuesday, where their attorneys petitioned a panel of judges to let their climate case go to trial. Until it does, their attorneys argued, fossil fuel development should be halted on public lands. The case of Juliana v the US charges the federal government with violating the constitutional rights of youth by perpetuating systems that contribute to climate breakdown. The supreme court of Pakistan and an appellate court in Norway will also hear similar cases soon. The government has argued that Americans don’t have a right to “a climate capable of sustaining human life”. Since it was originally filed in 2015, the Obama administration had also tried to stop this case. (The Guardian / NYT)

8/ The number of whales seen off the coast of New York has risen dramatically in recent years, due in part to legislation which has seen the waters of the Hudson river cleaned up. An astonishing 272 whales – almost all humpbacks – were seen over 2018. It is an enormous rise since 2011 when just five were seen in the waters off the east coast city. The quality of water in the area is now higher than at any point in the last hundred years, according to the NYC Department of Environmental Protection. (Independent)

9/ The new Finnish government has pledged to make the country carbon neutral by 2035, one of the fastest targets set around the world. Antii Rinne, the Social Democrat that has recently become Finland’s first centre-left prime minister in 20 years, told reporters it was time to “invest in the future”. In the deal, Finland’s new government say it will also seek to bring the EU to cut net emissions to zero before 2050. (Independent)

10/ A sprawling corner of the Amazon basin has been designated a protected area. Last week, the Bolivian municipality of Ixiamas issued a law establishing the Bajo Madidi Municipal Conservation and Management Area in the country’s northwestern region, near the Peruvian border. At 15,300 square kilometers (5,900 square miles), the protected area is larger than the U.S. state of Connecticut (triple the size of Grand Canyon National Park). About 40% of the area is intact tropical forest, with another 30% of the area among the most pristine savanna in the Amazon. Meanwhile, more than 20 endangered or threatened species of wildlife range there. (Conservation International / Andes Amazon Fund)

11/ Michael Bloomberg, the former mayor of New York City, will donate $500 million to a new campaign to close every coal-fired power plant in the United States and halt the growth of natural gas, his foundation said Thursday. Beyond Carbon is designed to help eliminate coal by focusing on state and local governments. The effort will bypass Washington, where Mr. Bloomberg has said national action appears unlikely. Most of the money would be spent over the next three years, though the time frame could be extended. It will fund lobbying efforts by environmental groups in state legislatures, City Councils and public utility commissions that aim to close coal plants and replace them with wind, solar and other renewable power. Part of the cash also will go toward efforts to elect local lawmakers who prioritize clean energy. (NYT) 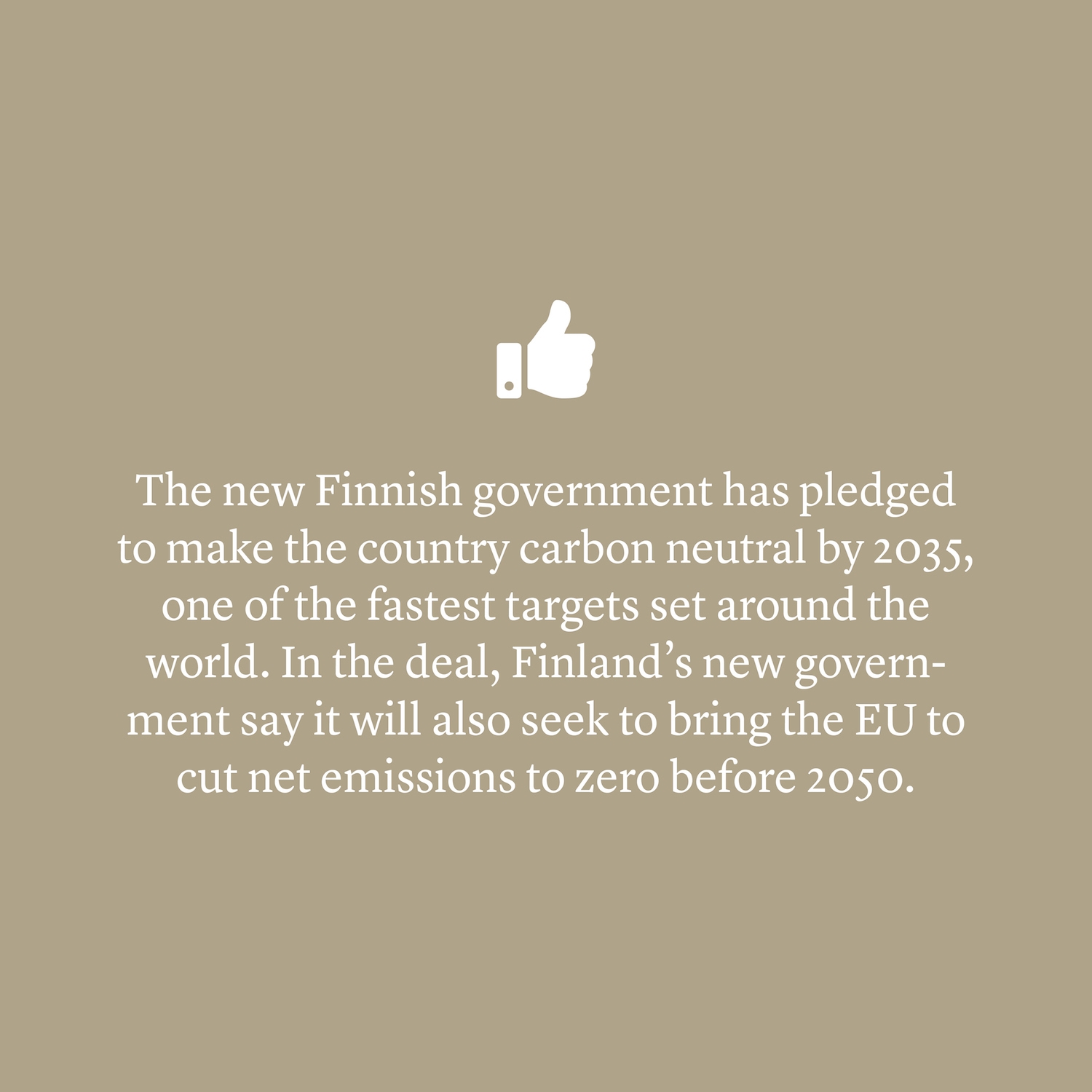 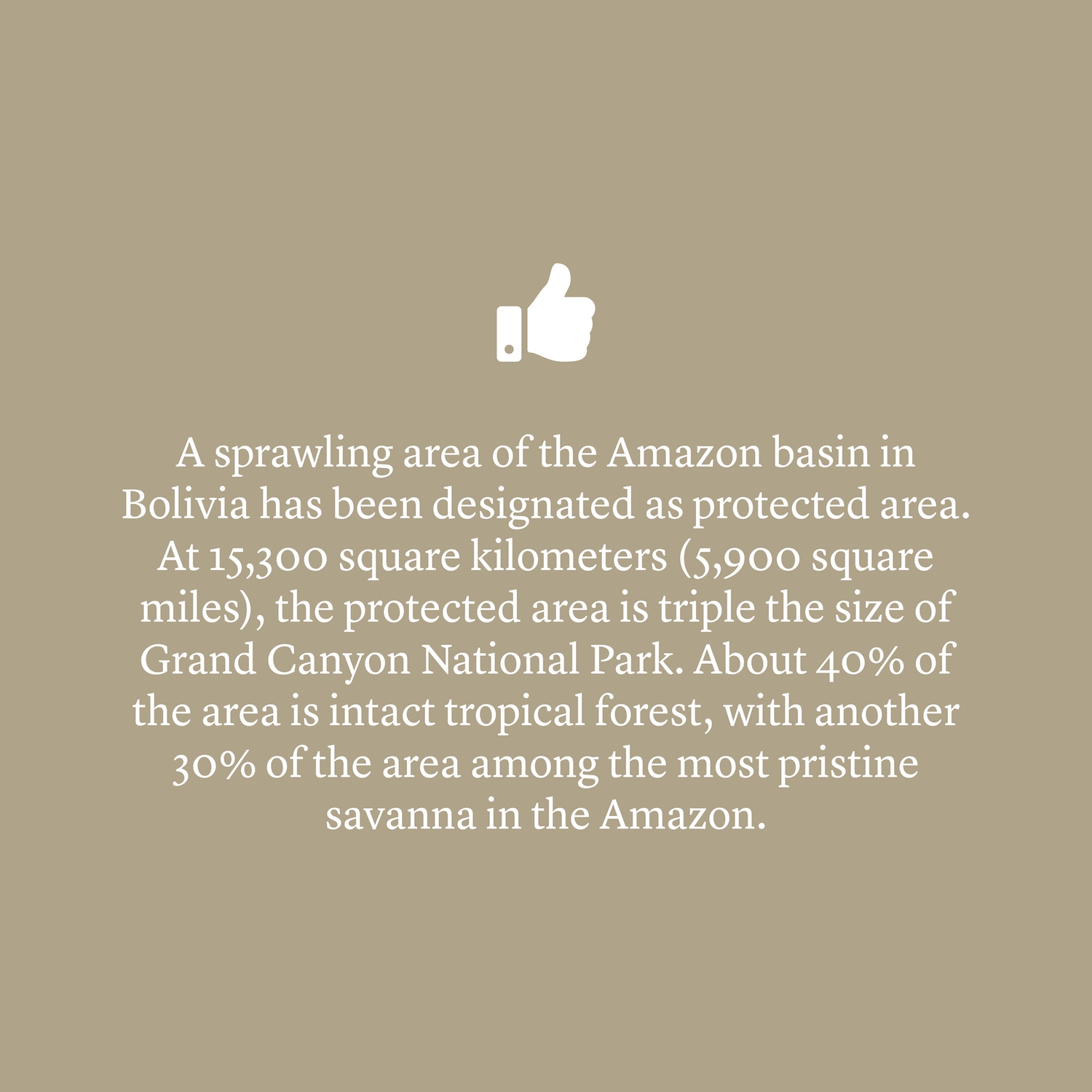 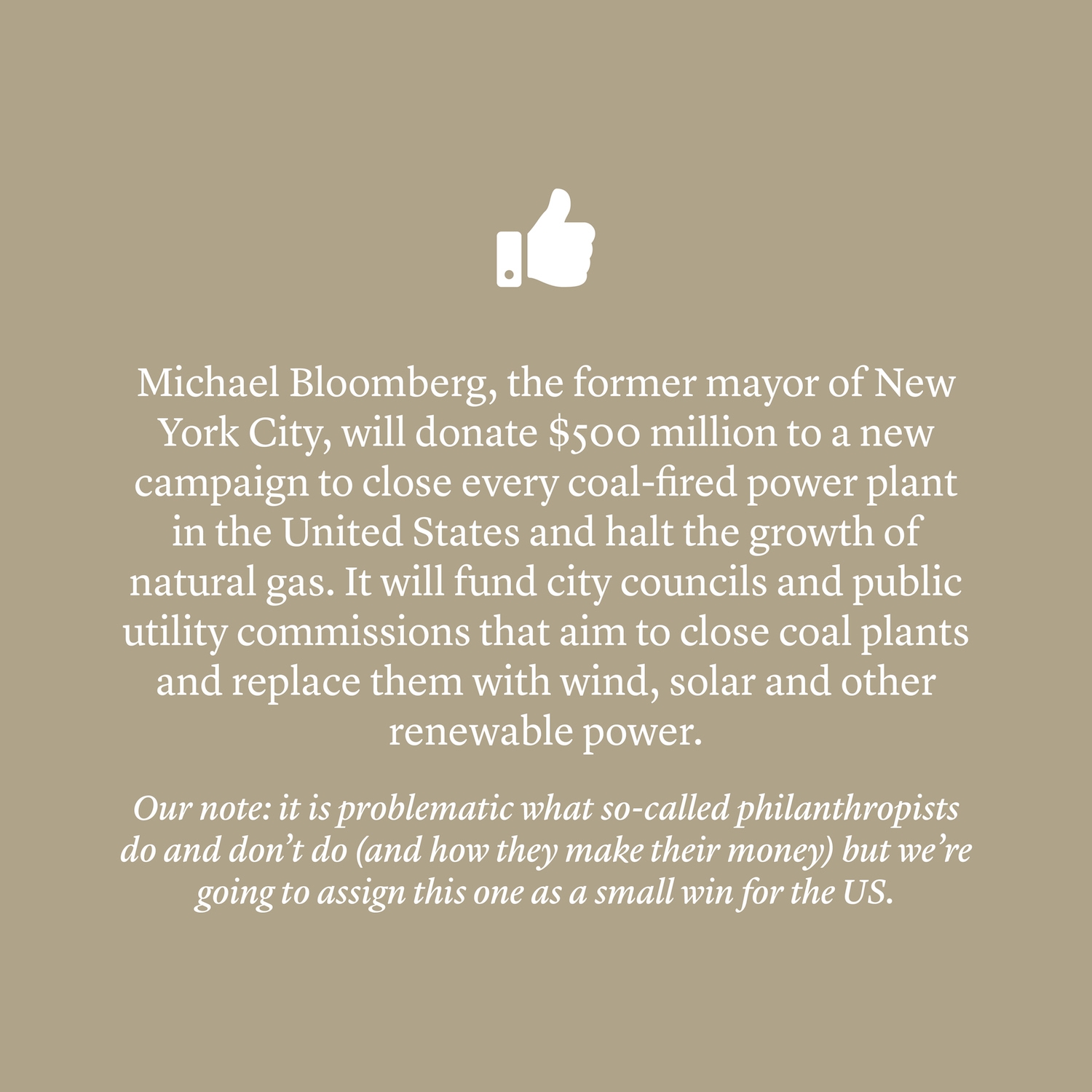 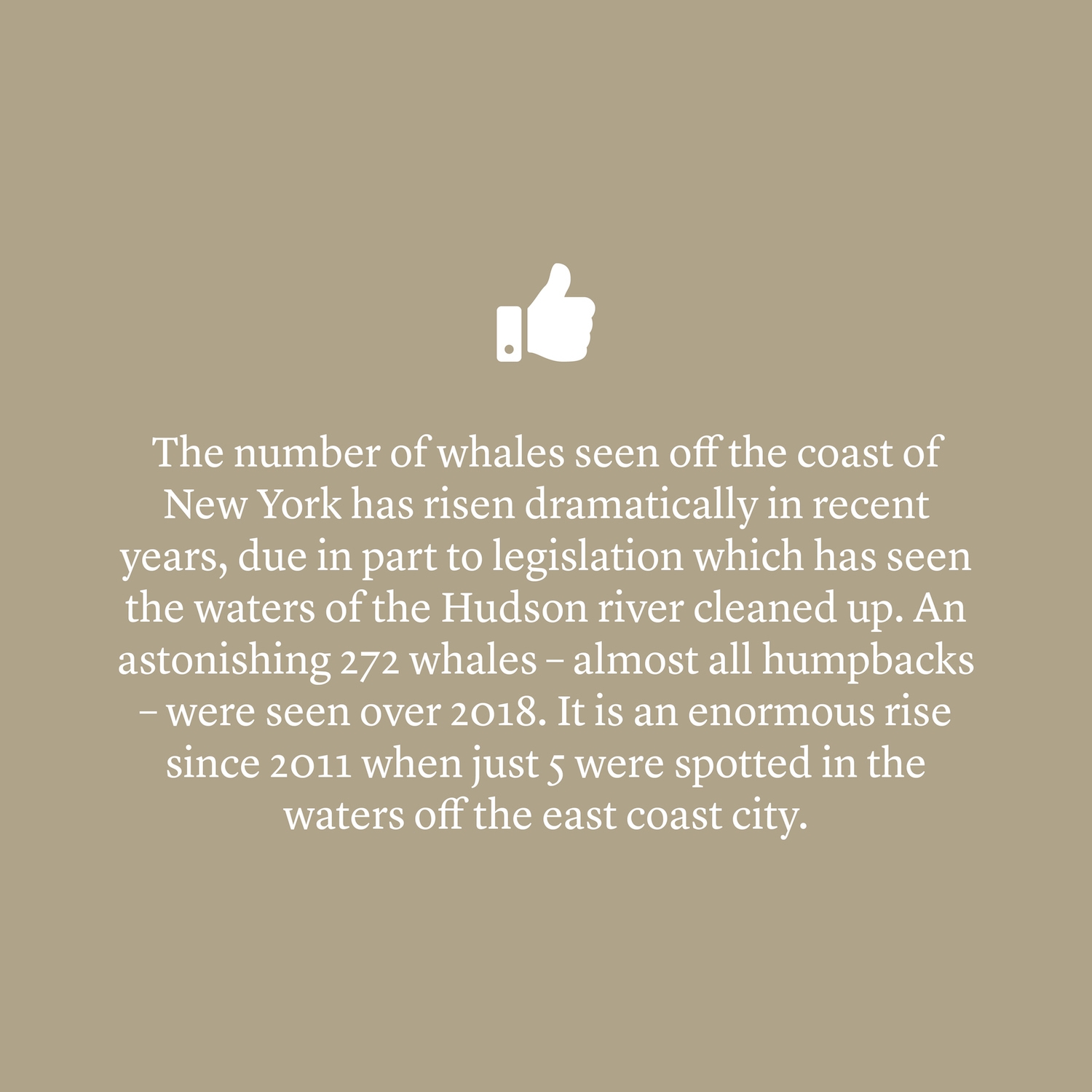 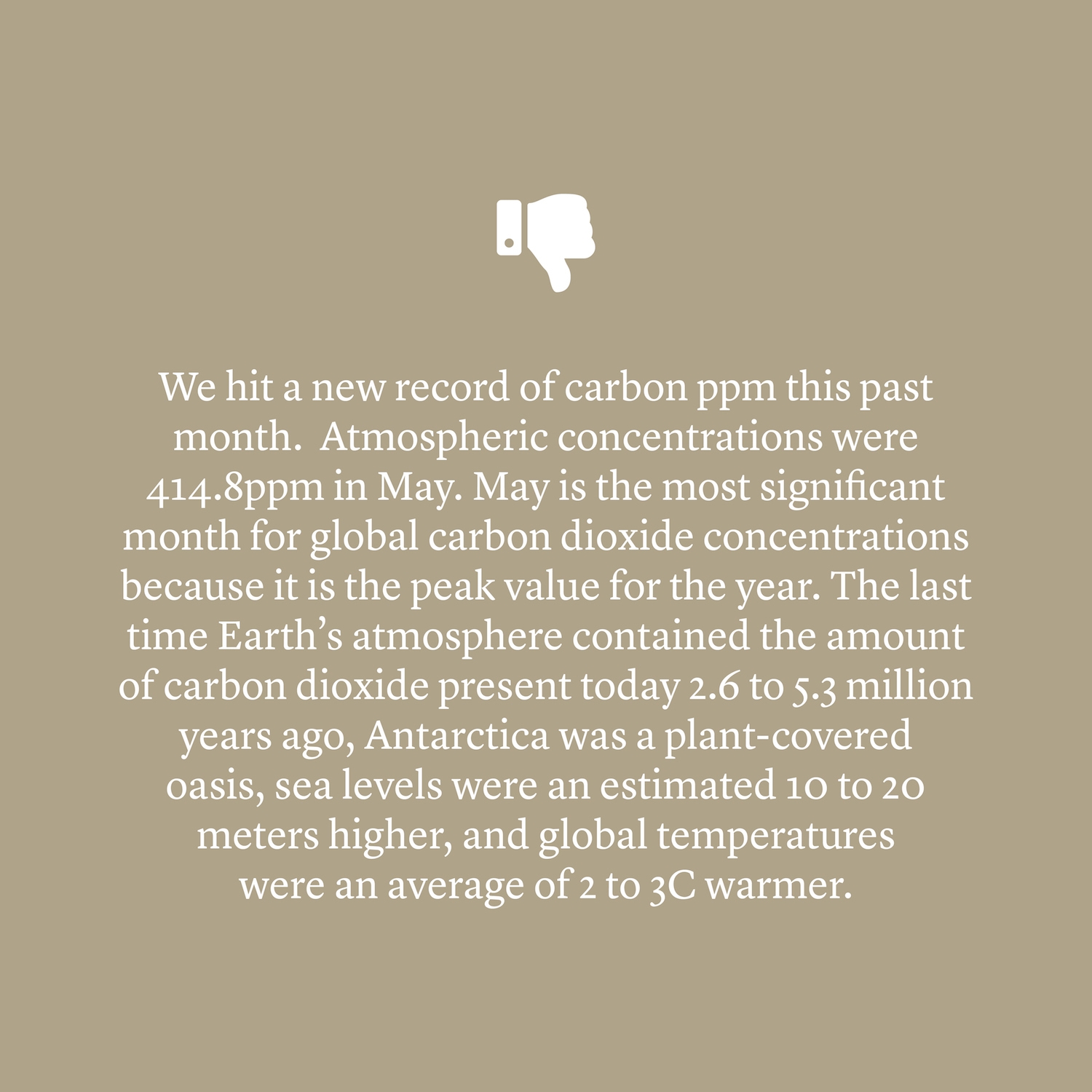 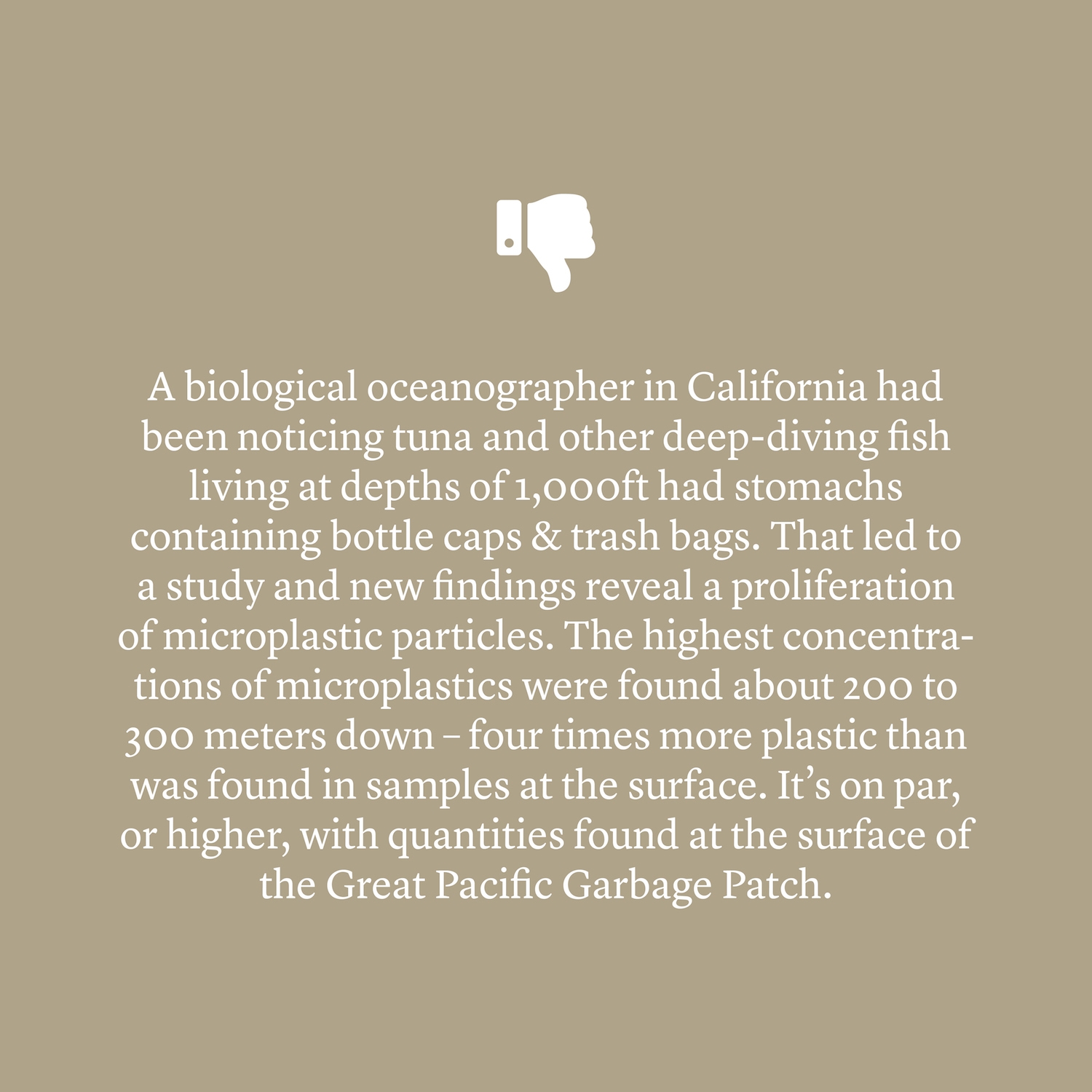 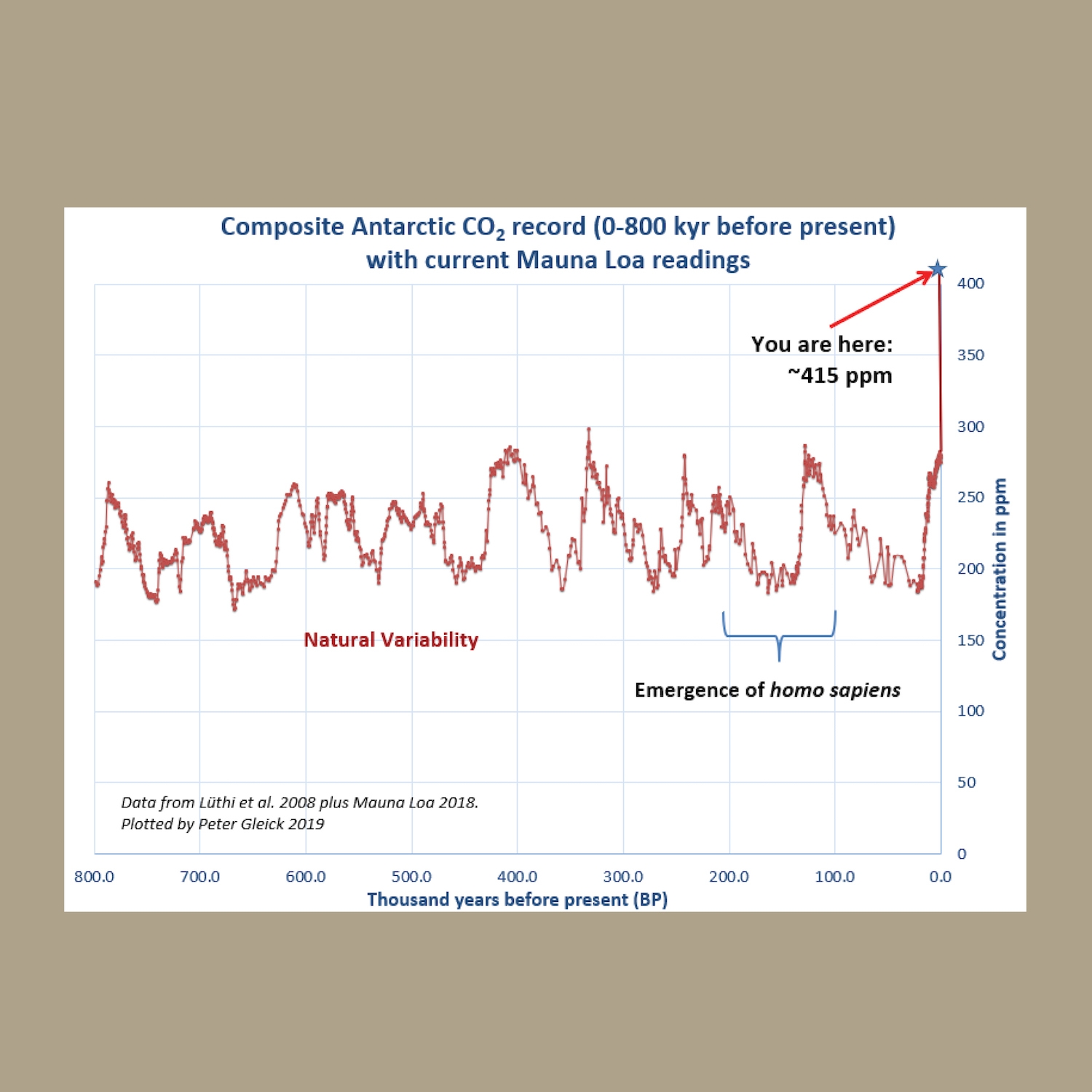