1/ Orca ‘apocalypse’: half of killer whales doomed to die from pollution. Ocean pollutant could trigger ‘complete collapse’ of killer whale populations. Killer whales are accumulating such high levels of polychlorinated biphenyls in their bodies that whole populations could face collapse, according to a new study. (ABC / The Guardian / The Atlantic)

3/ Australia’s greenhouse gas emissions climb again amid climate policy vacuum. On present trends, with virtually no policies apart from the renewable energy target, which will expire in 2020 and not be replaced, emissions are set to gallop way past the Paris agreement target. (The Guardian)

5/ How climate change is making droughts worse. In the first part of a new series, we take you through the current conditions, and then put them in context with other severe droughts in Australia’s history. (The Guardian)

6/ The tobacco industry footprint is comparable to entire countries (like Israel, Wales & Peru) new study back by the WHO finds. Tobacco farms accounted for the loss of around 5 per cent of forests in parts of Asia and Africa. More than 20,000 square miles of land is taken up around the world to accommodate tobacco farms, which use more than 22 billion tonnes of water, meaning a person smoking a pack of 20 cigarettes a day for 50 years is responsible for 1.4 million litres of water depletion over their lifetime. (Independent)

7/ Trump administration states a 4-degree rise in global temperatures by 2100. Deep in a 500-page environmental impact statement, the Trump administration made a startling assumption: on its current course, the planet will warm a disastrous 4 degrees celsius by the end of this century. It did not offer this dire forecast, premised on the idea that the world will fail to cut its greenhouse gas emissions, as part of an argument to combat climate change. Just the opposite. The analysis assumes the planet’s fate is already sealed and has it used to justify their new laws and changes. (Washington Post) 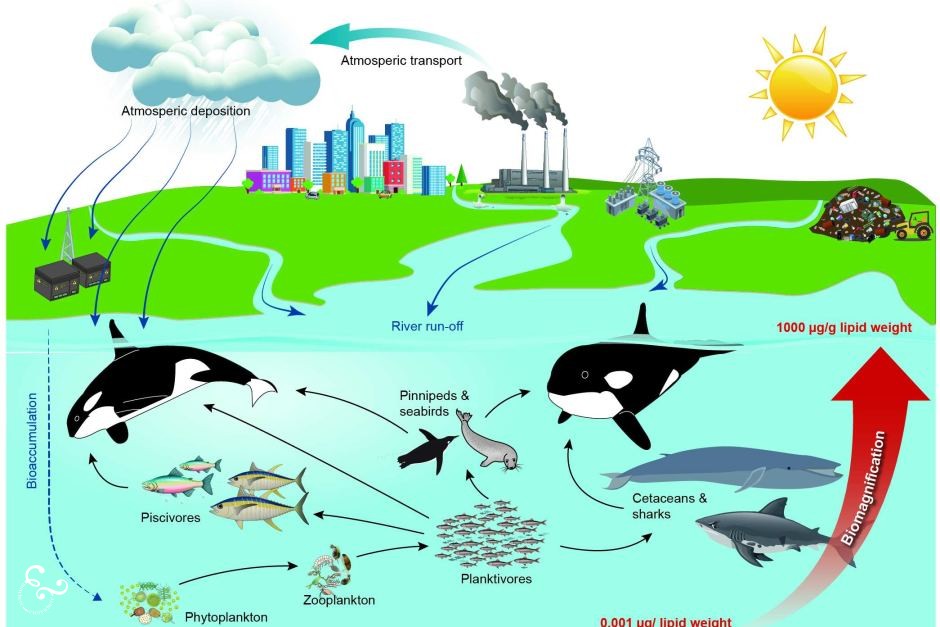 When foreign hazardous substances enter the marine environment, they are assimilated into the first link in the food chain, phytoplankton. The phytoplankton is consumed by zooplankton, which in turn is consumed by smaller fish, etc. The chemicals accumulate in each link of the food chain, and this means that killer whales that feed on large animals in contaminated areas may contain concentrations of PCBs so high that the survival of the species is threatened. (ABC)

9/ Well this is a mixed one. Terrible news that climate change has caused this area to melt and have potentially disastrous effects on seals and polar bears. Good news that we’re thinking about some protections. Commercial fishing will be banned in parts of the Arctic Ocean opened up by melting ice caps under a new deal to protect ecosystems. Nine countries and the European Union will this week sign the agreement to prevent exploitation of a region covering 2.8 million sq km, roughly the size of the Mediterranean Sea, for 16 years or longer, if they agree. (Independent)

10/ The trialling of the big Ocean Cleanup has begun in the Pacific and is starting to return findings before it heads out the great pacific garbage patch. (Ocean Cleanup Updates)

“There is a grinding reality in hearing someone from a Pacific island talk about where the sea was when they were a child, and potential loss of their entire village as an adult. Our action in the wake of this global challenge remains optional. But the impact of inaction does not. Nations like Tuvalu, the Marshall Islands, or Kiribati—small countries who’ve contributed the least to global climate change—are and will suffer the full force of a warming planet. If my Pacific neighbors do not have the option of opting out of the effects of climate change, why should we be able to opt out of taking action to stop it?”