Friends, we have 12 years to majorly correct course otherwise we’re facing catastrophic climate change. This week our top news items are mostly related to various facets of this. We’ll write more about actions you can take but please, please read up and talk about it with the people in your life.

1/New UN report outlines ‘urgent, transformational’ change needed to hold global warming to 1.5°C. IPCC climate change report calls for urgent action to phase out fossil fuels. UN says coal-fired electricity must end by 2050 if we are to limit global warming rises to 1.5C. Top scientists from around the world urge changes “in all aspects of society” to limit climate warming. Communities across the world are already experiencing the devastating impacts of 1°C global warming. ‘It’s the ultimate injustice that the communities that are least responsible for climate change are the ones suffering the worst impacts’. The landmark United Nations report paints a far more dire picture of the immediate consequences of climate change than previously thought and says that avoiding damage requires quickly transforming the world economy. (The Guardian / BBC / New York Times / Vox)

2/ Every one of Australia’s coral reefs (not just the Great Barrier Reef) is threatened by climate change, potentially devastating not just the country’s ecosystems but its economy as well. (New York Times)

4/ A predicted rise in emissions from the petrochemical industry, led by plastics producers, threatens to erode climate benefits from reductions in other sectors, according to new report. (New York Times)

5/ Scientists say halting deforestation ‘just as urgent’ as reducing emissions. Protecting and restoring forests would reduce 18% of emissions by 2030 and help to avoid global temperature rise beyond 1.5C. The role of forests in combating climate change risks being overlooked by the world’s governments, according to a group of scientists that has warned halting deforestation is “just as urgent” as eliminating the use of fossil fuels. (The Guardian)

7/  Alarming level of microplastics found in Tennessee River (a major US river described by scientists as an “underwater rain forest”. Fath found that in some parts of the river, microplastics ranged from 16,000 to 18,000 particles per cubic meter. When Fath conducted similar chemical tests on Germany’s Rhine River, there were only 200 particles per cubic meter. He blames this difference on the less developed recycling and waste infrastructure present in the U.S. as compared to much of Europe. (National Geographic) 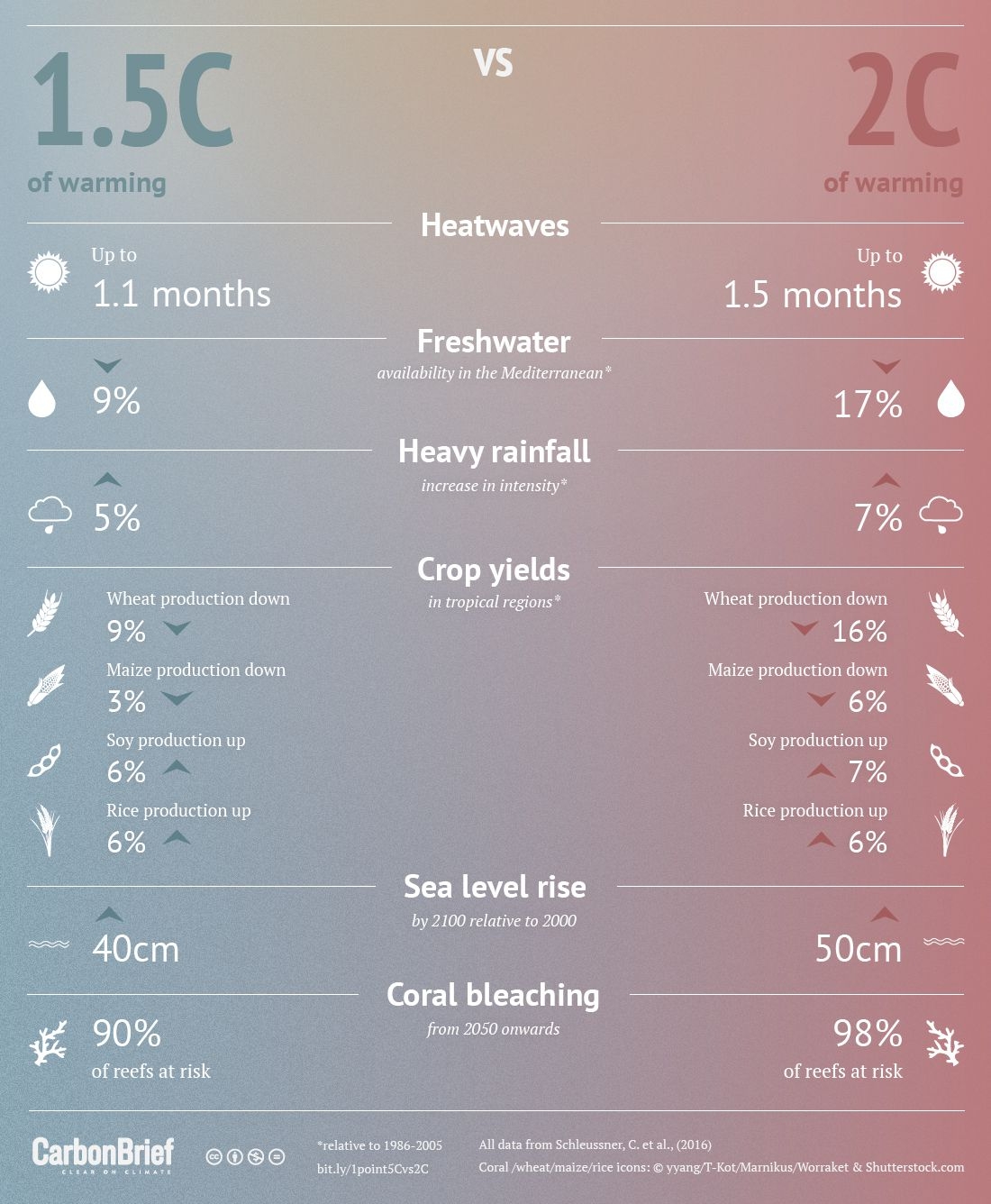 This graphic explains why 2 degrees of global warming will be way worse than 1.5. (Vox)

7/ Tesco to scrap ‘best before’ dates from fruit and vegetable lines. Labels will be ditched from a further 116 lines of produce to help reduce food waste. The UK’s largest supermarket is to scrap potentially confusing “best before” dates from dozens more of its fresh fruit and vegetable lines after research found ditching the labels helped customers reduce their food waste at home. (The Guardian)

8/ Ukraine launches its first solar plant in the abandoned Chernobyl area around the former nuclear power station. It will power 2,000 households. People however won’t be able to live on this previous disaster site for another 24,000 years. (BBC)

9/ Thousands of anti-coal demonstrators descended on Germany’s Hambach forest on Saturday to celebrate an unexpected court victory that suspended an energy company’s planned razing of the woodland to expand a giant open-cast mine. (The Guardian)