1/ More than 7.7m hectares (larger than the state of Tasmania) of threatened species habitat have been cleared since the introduction of Australia’s national environment act in 2000, according to new research that finds 93% of land cleared was not referred to the federal government for assessment (nor approval), despite a requirement to do so under law. Alarmingly, even when companies or people did refer proposed actions, 99% were allowed to proceed (sometimes with conditions). It excluded any clearing that was due to natural causes such as fire. The paper says Australia’s national environment laws have been “ineffective” at preventing habitat loss and calls for amendments that require critical habitat, where possible, to be mapped and monitored. Clearing and land use change is regarded by ecologists as the primary threat to Australia’s biodiversity. Australia has a globally high extinction rate and the highest mammalian extinction of the world. (The Guardian / The Conversation)

2/ Forest fires, droughts and other forms of land degradation cost the global economy as much as 15 trillion dollars every year (10 – 17%) and are deepening the climate change crisis. By 2025, some 1.8 billion people will experience serious water shortages, and two-thirds of the world’s population will be living in “water-stressed” conditions. “In very simple terms, the message is to say: invest in land restoration as a way of improving livelihoods, in reducing vulnerabilities contributing to climate change, and reducing risks for the economy.” (UN)

3/ Climate change is not only having a devastating impact on the environments we live in, but also on respect for human rights globally, the UN has warned. The UN rights chief cited the civil wars sparked by a warming planet, the plight of Indigenous people in an Amazon ravaged by wildfires and rampant deforestation, and attacks on environmental activists, particularly in Latin America. The UN rights chief also highlighted the impact climate change is having on insecurity around the world. She cited a UN estimate that 40% of civil wars over the past six decades have been linked to environmental degradation. (The Guardian)

4/ European seas, from the North East Atlantic ocean to the Adriatic, are in a “poor condition”, with coastal states failing to meet targets to protect marine wildlife, a report by WWF has concluded. The requirement to create marine protected areas is part of the EU’s efforts to meet international targets to ensure that 10% of the world’s oceans are protected by 2020. The study found that 19 of 23 member states were falling behind on developing management plans while 11 had not announced any plan at all. (The Guardian)

5/ The operator of the ruined Fukushima Daiichi nuclear power plant may have to dump huge quantities of contaminated water from the site directly into the Pacific Ocean, Japan’s environment minister has said. More than 1 million tonnes of contaminated water has accumulated at the plant since it was struck by a tsunami in  2011. Tepco admitted last year that the water in its tanks still contained contaminants beside tritium. Coastal nuclear plants commonly dump water that contains tritium into the ocean. One recent study said it could take 17 years to discharge the treated water after it has been diluted to reduce radioactive substances to levels that meet the plant’s safety standards. (The Guardian)

6/ Queensland, Australia remains in the grip of one of the worst bushfire threats in its history, fuelled by prolonged dry conditions and fierce gusting winds. In drought-hit parts of eastern and southern Australia, rainfall levels for the season were in the lowest 10% of historical records. About 98% of NSW and 65% of Queensland is currently drought affected. The 10-day emergency has seen some 1200 bushfires burning across the state, with more than 600 community warnings issued in the past two weeks. Officials have warned some fires could burn for months because the ground is bone-dry and there is no significant rain in sight. Our note: the rainforests are burning.  (The Guardian / The Guardian 2 / Brisbane Times)

7/ An area of forest the size of the UK is being lost every year around the world, the vast majority of it tropical rainforest. The rate of loss has reached 26m hectares a year, having grown rapidly in the past five years despite pledges made by governments in 2014 to reverse deforestation and restore trees. The rate of tree cover loss has gone up by 43% since the UN New York declaration was adopted which required countries to halve deforestation by 2020. Tree planting does not compensate for the loss of standing forests, because established growth yields benefits beyond carbon uptake. “It can take centuries for forests to recover their full carbon-absorbing and weather-regulating capabilities.” (The Guardian)

8/ Extreme weather events displaced a record seven million people from their homes during the first six months of this year, a figure that put 2019 on pace to be one of the most disastrous years in almost two decades even before Hurricane Dorian battered the Bahamas. Floods, landslides, cyclones and other extreme weather events temporarily displaced more people in the first half of this year than during the same period in any other year. For varying reasons, the numbers should be seen as a low estimate. (NYT)

9/ A new study from the University of South Florida St. Petersburg and Eckerd College estimates the waters of Tampa Bay contain four billion particles of microplastics. This is the first measurement of microplastic abundance and distribution in the region. (Science Daily)

10/ If Australia treated recycling waste like iron ore or coal the nation could be $300m better off each year, a report has found. Instead, Australia makes just $4m a year from recycling due to high levels of contamination in co-mingled recycling bins. (The Guardian)

11/ In an unusual crowdsourcing campaign, more than 1,000 students, philanthropists, sailors, businesspeople and others raised 3 million Canadian dollars that the British Columbia Parks Foundation needed to buy nearly 2,000 acres in Princess Louisa Inlet to turn it into a public park. Known as the “Yosemite of the North,” the stunning glacier-carved gorge had been eyed by developers this year. The land has important cultural significance to the shishalh, an Indigenous community, and its thickets of cedar and Douglas fir are home to grizzly bears, mountain goats and eagles. (NYT) 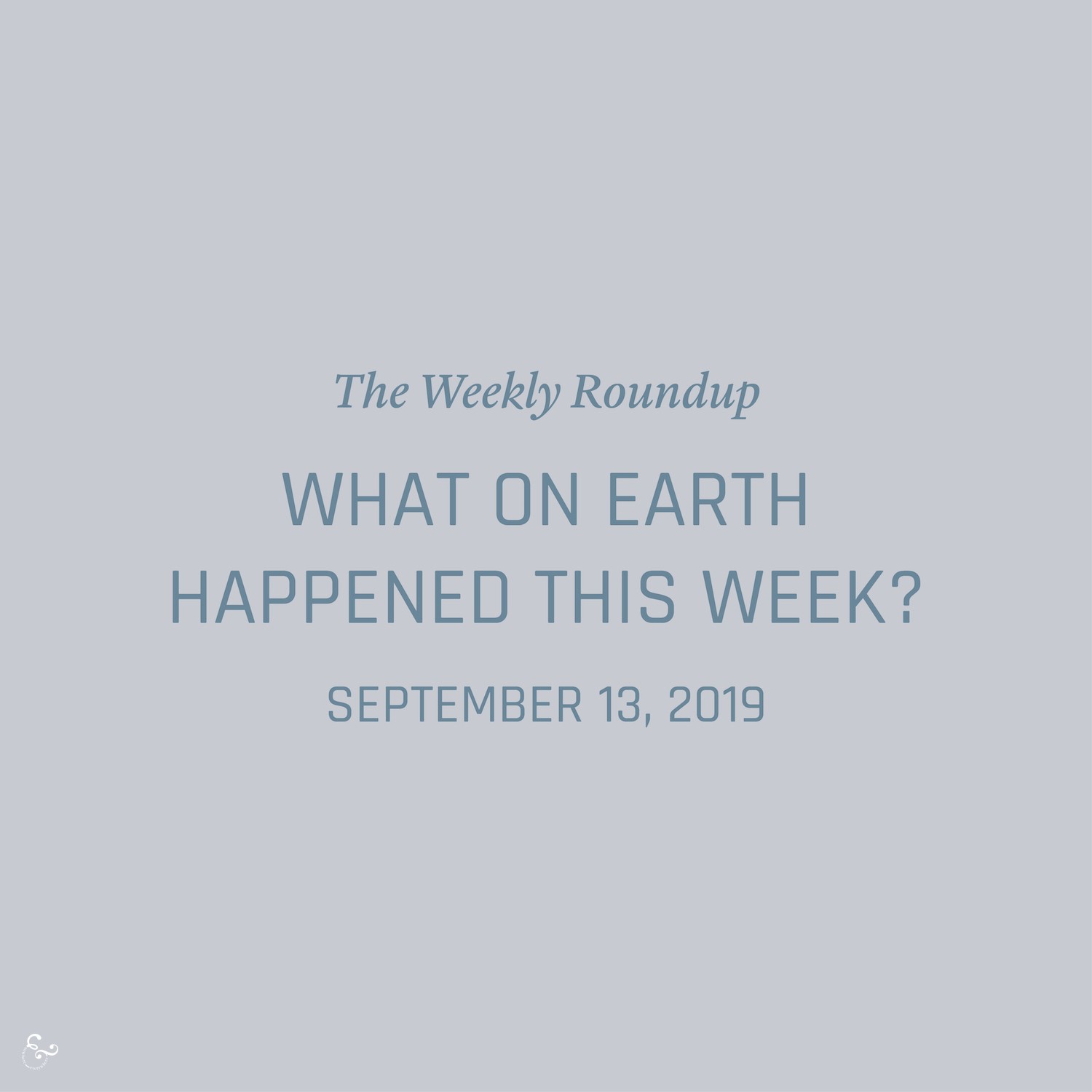 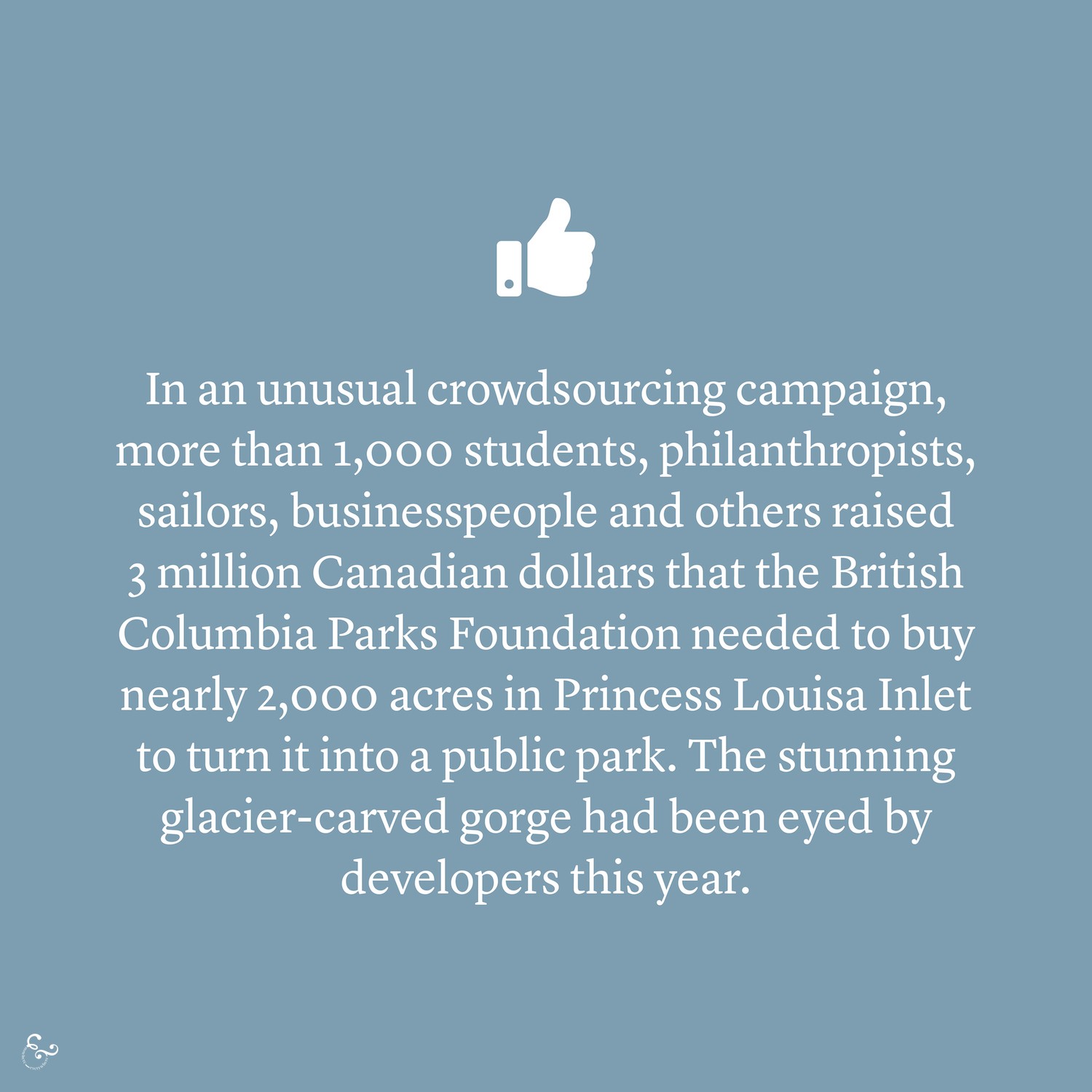 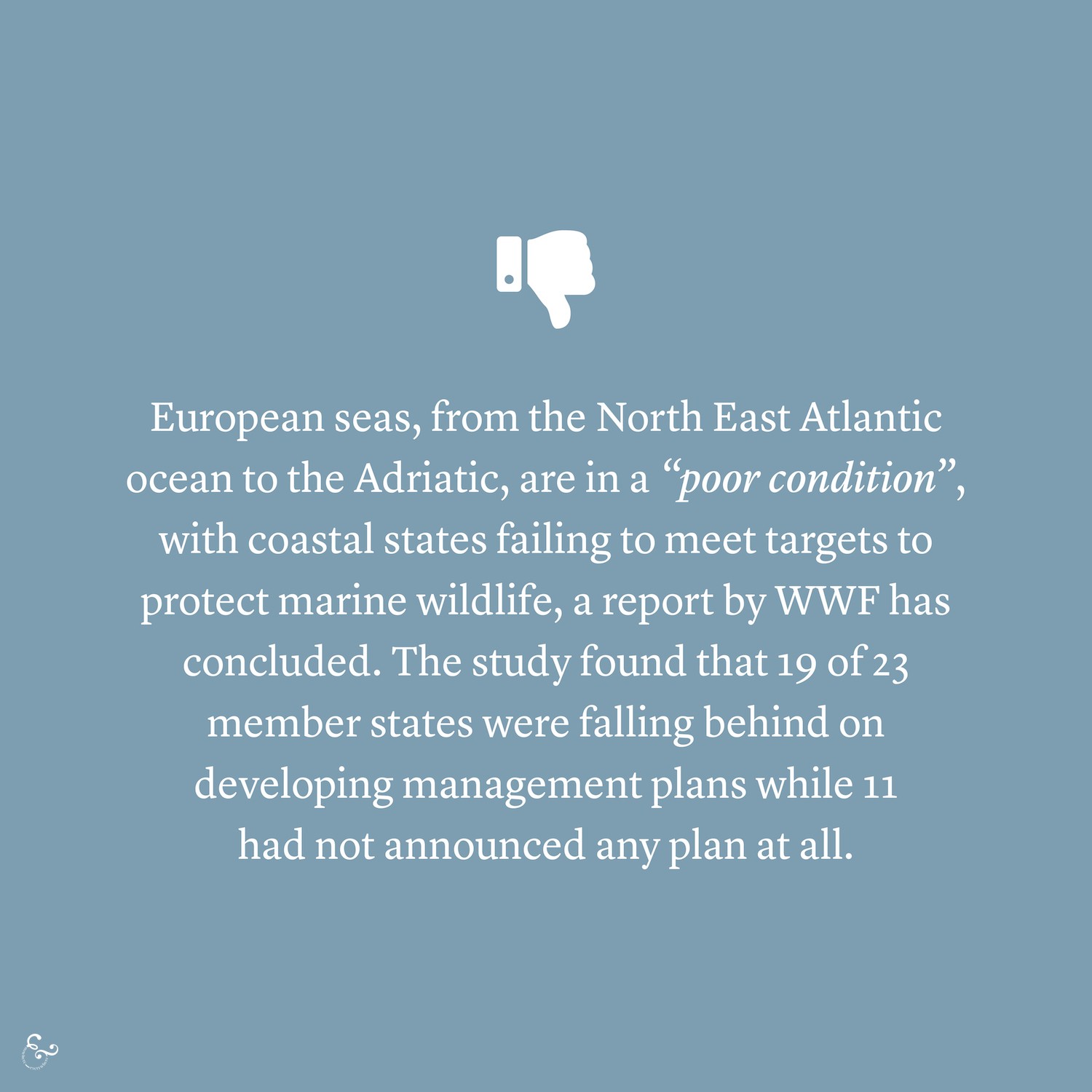 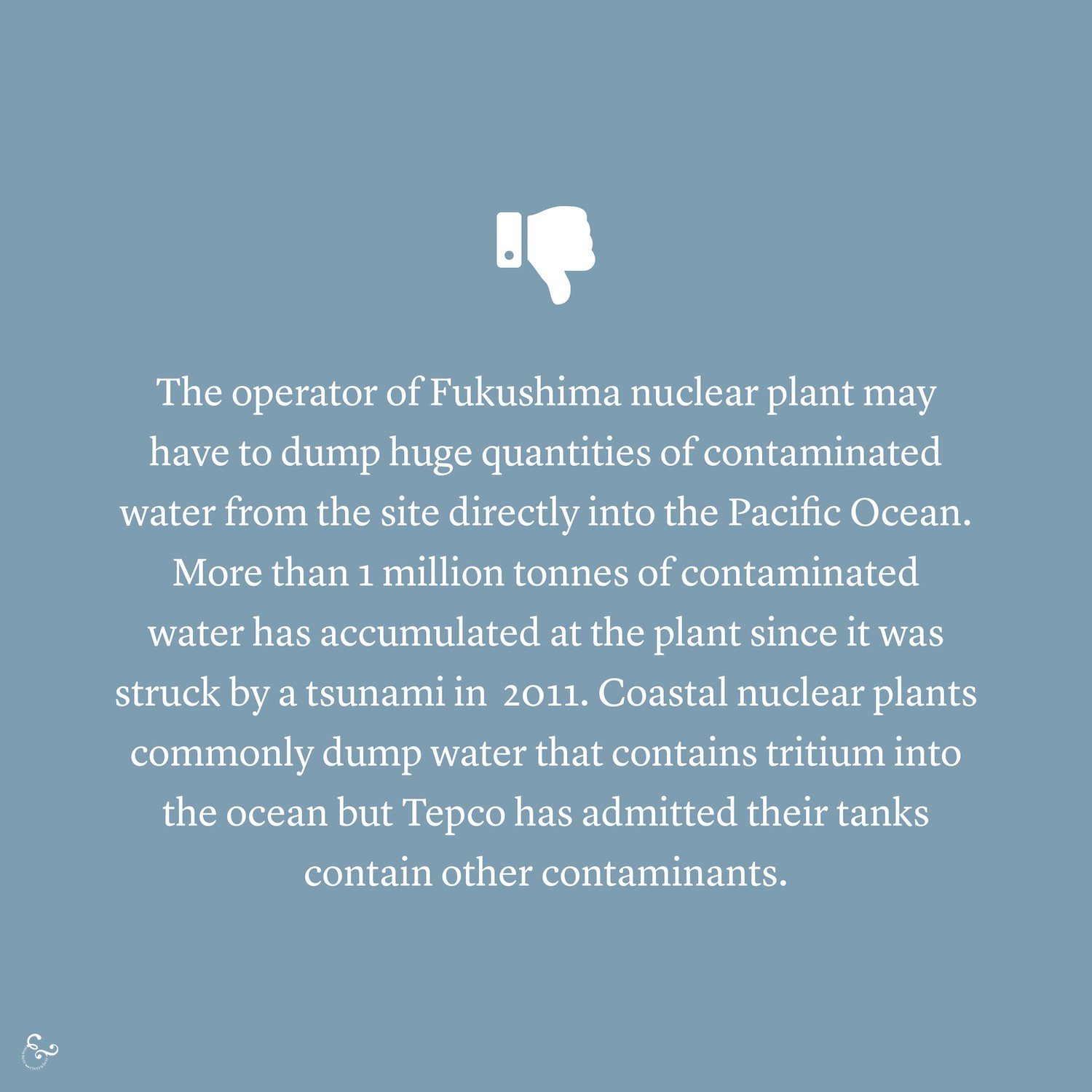 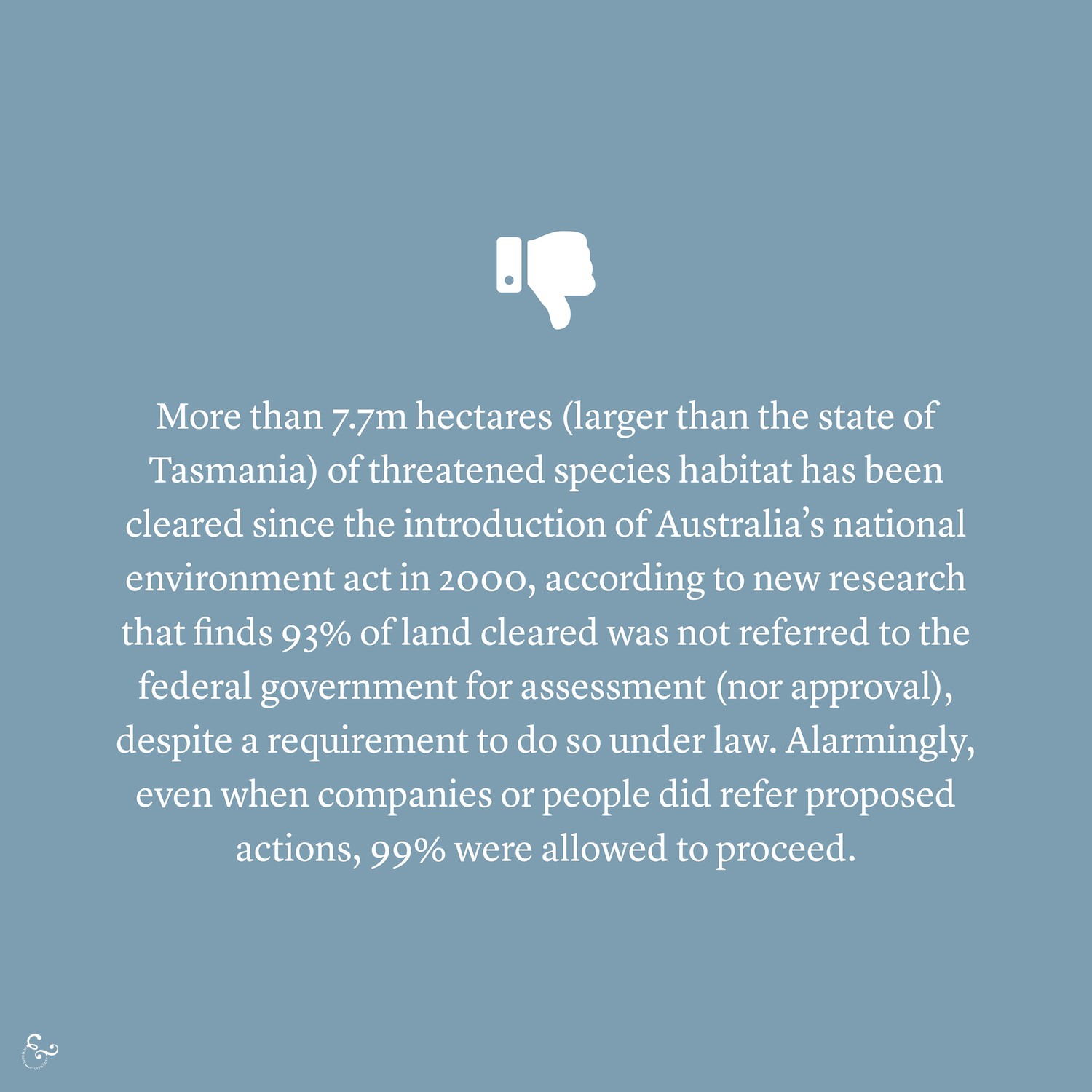 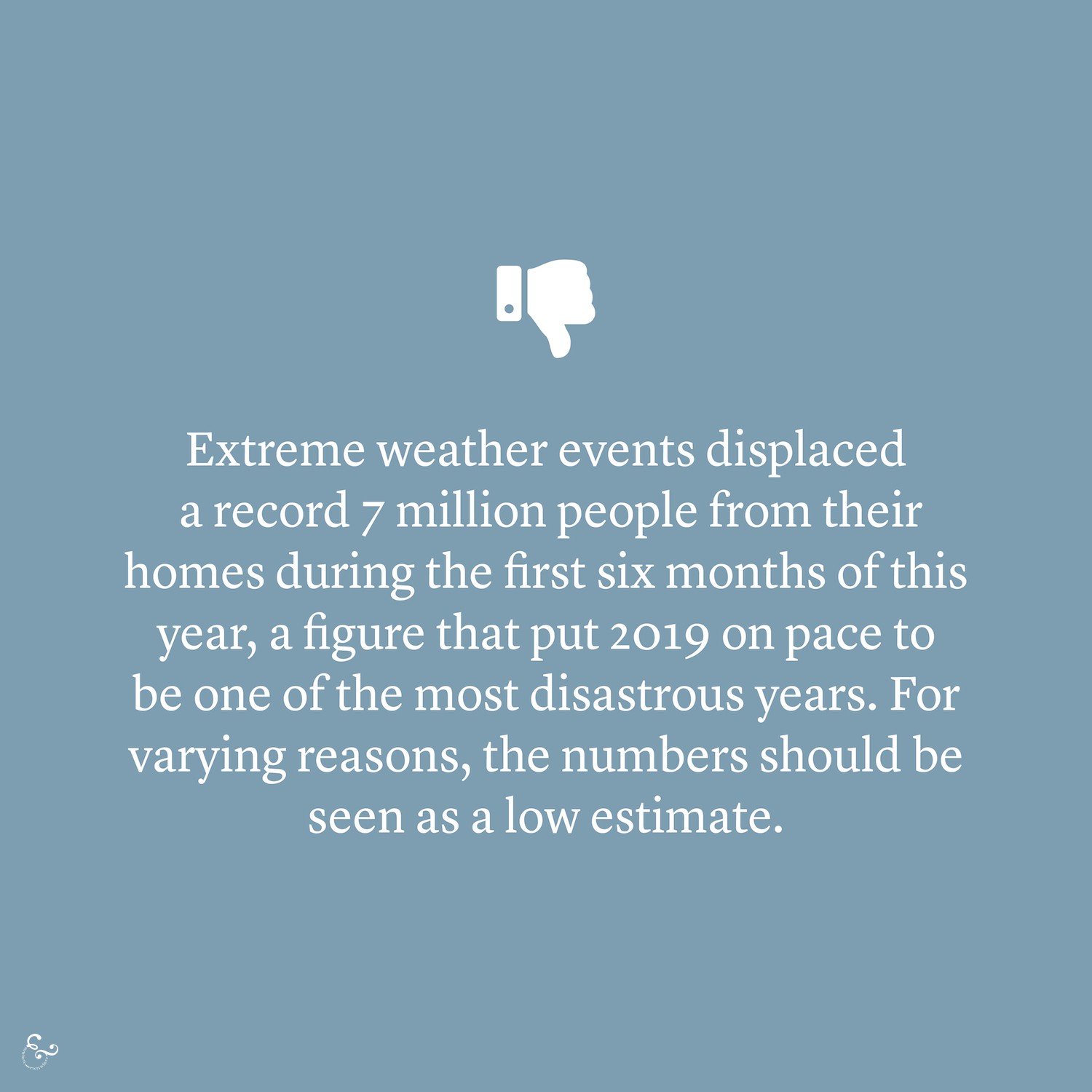 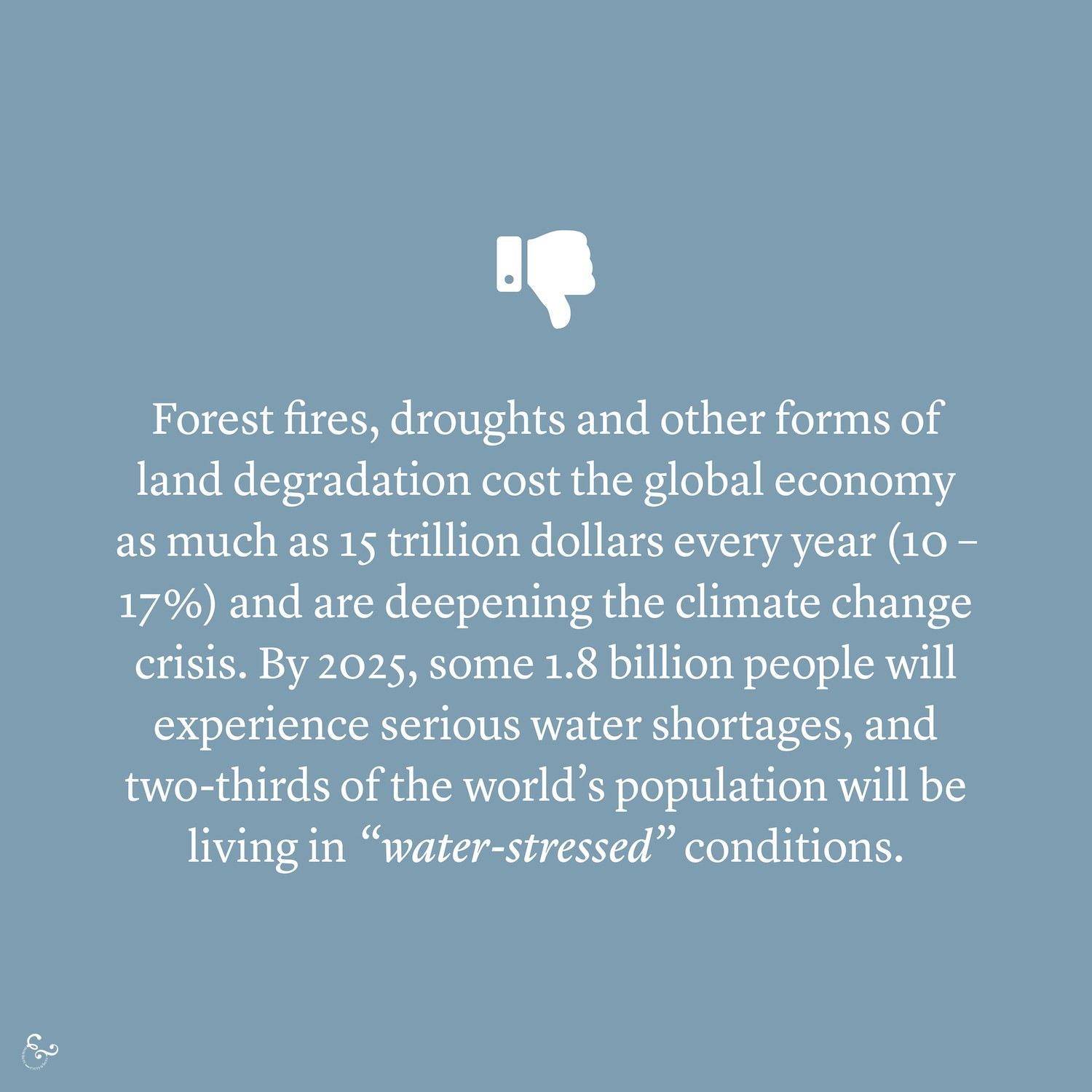 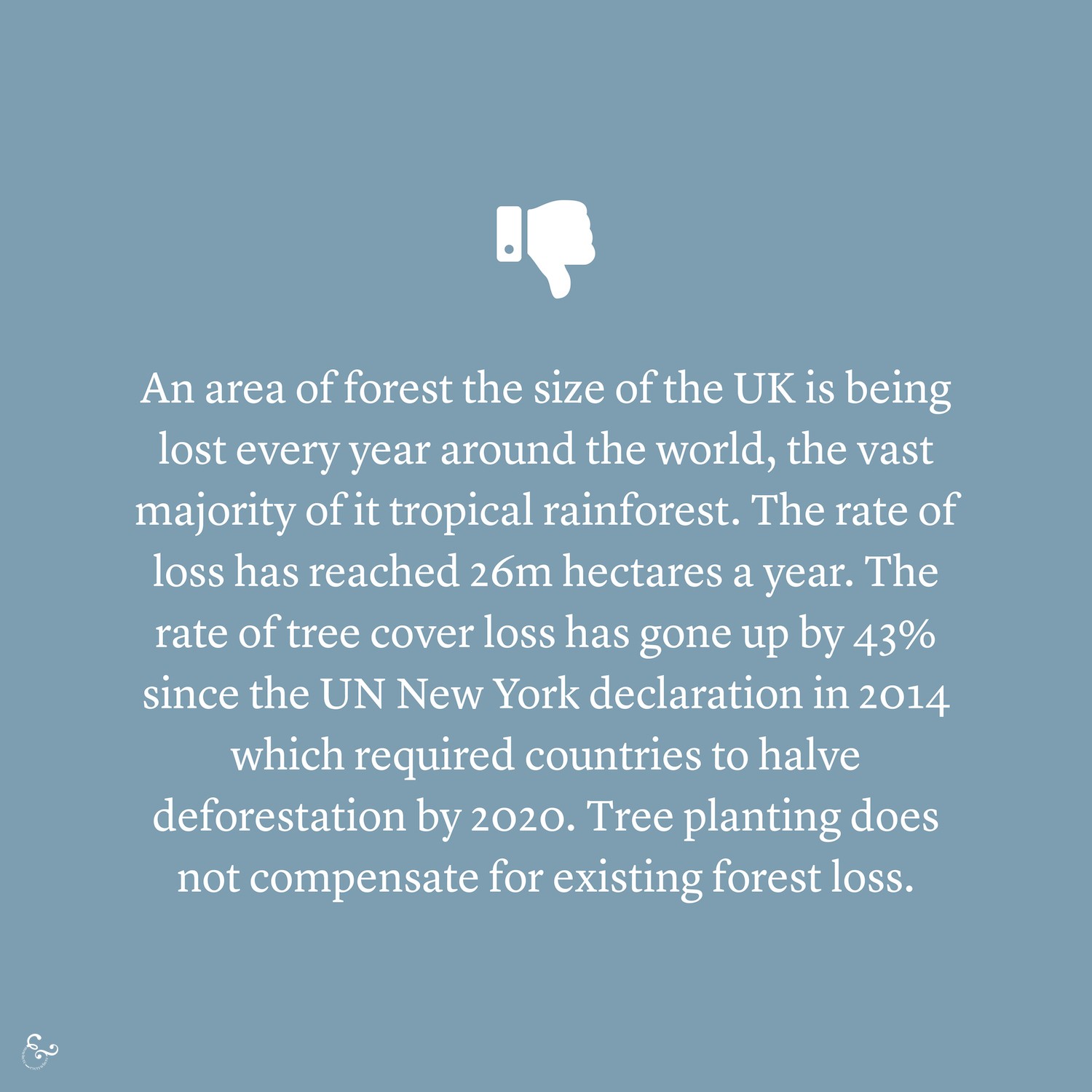