1/ A new report by the Mexican Centre for Environmental Rights has illuminated the hidden human rights abuses implicated in the expansion of the renewable energy sector in the country.  Since 2012, 83 Mexican land and environment defenders were murdered, with a third of attacks targeting opponents of energy mega-projects including wind and hydroelectric power. Many of the defenders were from rural and Indigenous communities defending their right to consultation and compensation. The report further reinforces the importance of a just and transparent transition to renewable energy. (The Guardian)

2/ Scientists and environmentalists have warned of increased risk of pandemics as the continued destruction of natural environments enhances exposure to inter-species disease transmission. Human incursions into wildlife habitat bring people into closer proximity to wildlife populations and the number of animal-borne pathogens is increasing. As many infections stem from communities that depend on wildlife for food, the solution may lie in increasing equitable access to food and reducing food waste. (Independent)

3/ An annual ‘State of Transition’ assessment of 238 energy, industrial, and transport companies on their project emissions intensity found that more than 80 percent of them have made little progress on transitioning to a low-carbon economy. The report also raises concerns for investors that the focus on ‘net-zero targets’ means many companies are relying on carbon offsetting rather than emissions reduction to meet climate performance commitments (yes!). (Environment Leader / TPI)

4/ A new paper has highlighted a flaw in climate and disaster models which underestimate the speed at which climate change is progressing. Up until this point, future models have been based on the historical climate period up to 2005, however the warming that has occurred since then dramatically increases the probability of future extreme weather events. The finding has significant practical implications for community planners and government policy makers to prepare for accelerated rates of change. (Scientific American)

5/ The US Environmental Protection Agency (EPA) has suspended its enforcement of environmental and public health protections and pollution limit breaches, citing difficulty for industry compliance due to the coronavirus pandemic. This follows a week of continued rollbacks of environmental safeguards by the Trump administration despite many states freezing approvals in the midst of a national emergency. (The Guardian / Huffington Post / Seattle Times / Independent)

In the last week, government departments have auctioned oil and gas drilling rights in the Gulf of Mexico, approved the expansion of a gold and silver mine, approved the construction of a liquid-natural gas export terminal and a gas pipeline.

6/ Previously thought to be stable, new research shows that East Antarctica’s Denman Glacier has retreated nearly 3 miles (4.8km) over the past two decades, losing an equivalent of 268 billion tonnes of ice. Scientists warn that the shape of the ice canyon makes it very susceptible for further rapid climate driven collapse and risks exposing additional inland ice sheets to melting. (Yale)

7/ New medical research has linked the smoke and particulate matter from Australia’s recent bushfire season to the death of at least 417 people and the hospitalization of over 3000 people for cardiac and respiratory complications. The findings confirm the adverse public health impacts of climate change related bushfires and extreme weather events. (Scientific American)

8/ New research has reinforced th credentials of electric cars, refuting previous comparisons claiming petrol cars have lower net carbon emissions over their lifetime. The analysis compared the average lifetime emissions, including during its production, while it is being driven and when it is destroyed, of petrol and electric cars sold in 59 regions across the world in 2015. They found that electric vehicles have lower net carbon emissions in 53 out of 59 regions, and this will only improve as countries transition their electricity grids to renewable power. (New Scientist)

9/ A push to have upgrades for a coal-fired power generator in Australia covered under the tax-payer funded Emissions Reductions Fund have been rejected by an independent review committee. The proposed $AUD 14 million turbine upgrade was deemed ineligible as a viable pollution reduction activity. Attempts by the company to lobby the government to change the policy and its guidelines for eligible projects under the fund have failed. (The Guardian)

10/ The world’s wind power capacity grew by almost a fifth (20%) in 2019 after a year of record growth for offshore windfarms and a boom in onshore projects in the US and China. Analysts have forecast that global wind power capacity will increase by an additional 76GW (another 20%) in 2020 pending COVID-19 impacts. (The Guardian / But see also BBC on the biodiversity impact)

11/ The Standing Rock Sioux Tribe has won a legal challenge for an extensive environmental review of the Dakota Access Pipeline. After years of resistance against the project, an executive order by the Trump administration enabled oil to begin flowing through the pipeline in 2017. The new ruling found that the federal government had not done an adequate job of assessing the risks of major oil spills and leaks on Indigenous lands, and ordered they conduct a more extensive impact investigation. (NYT) 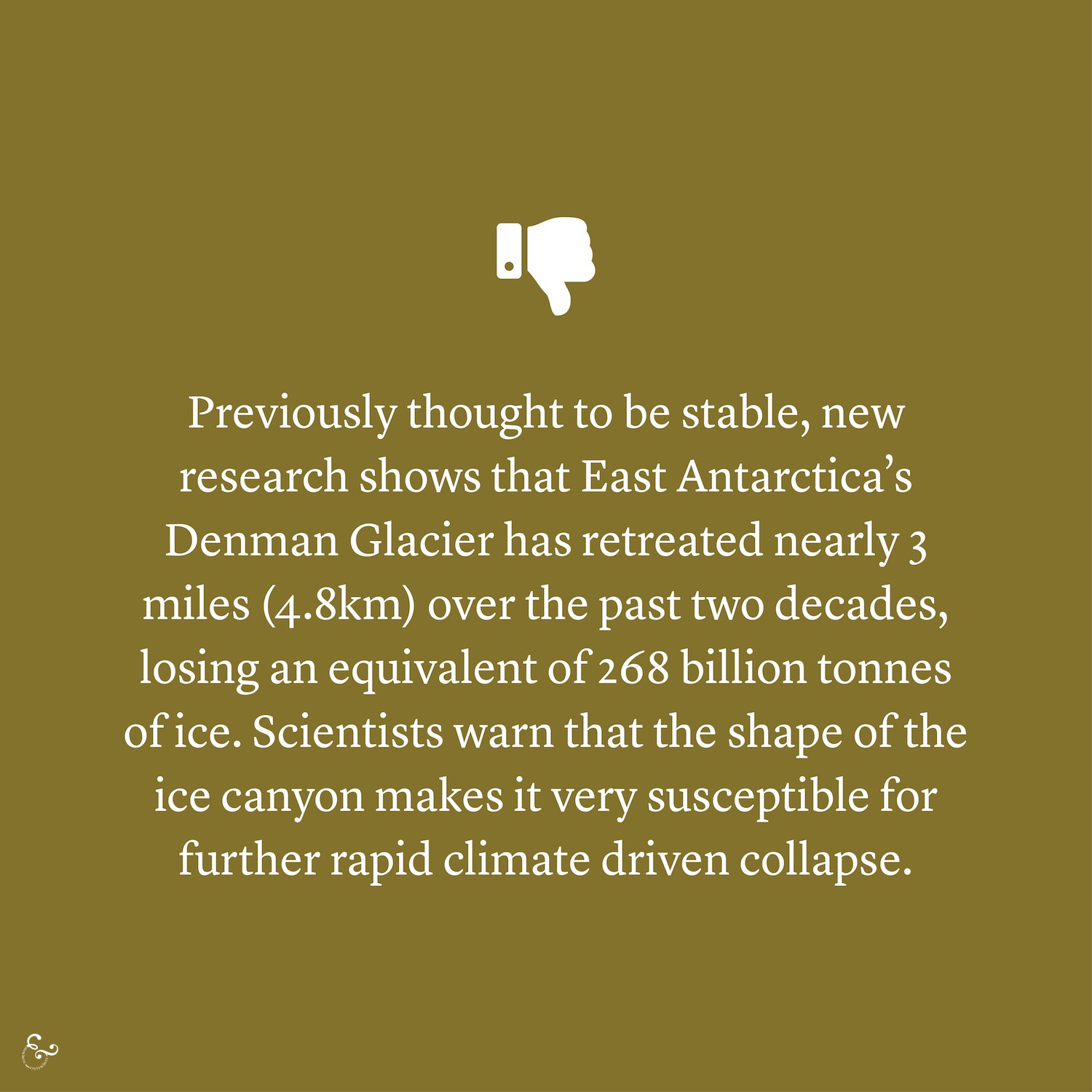 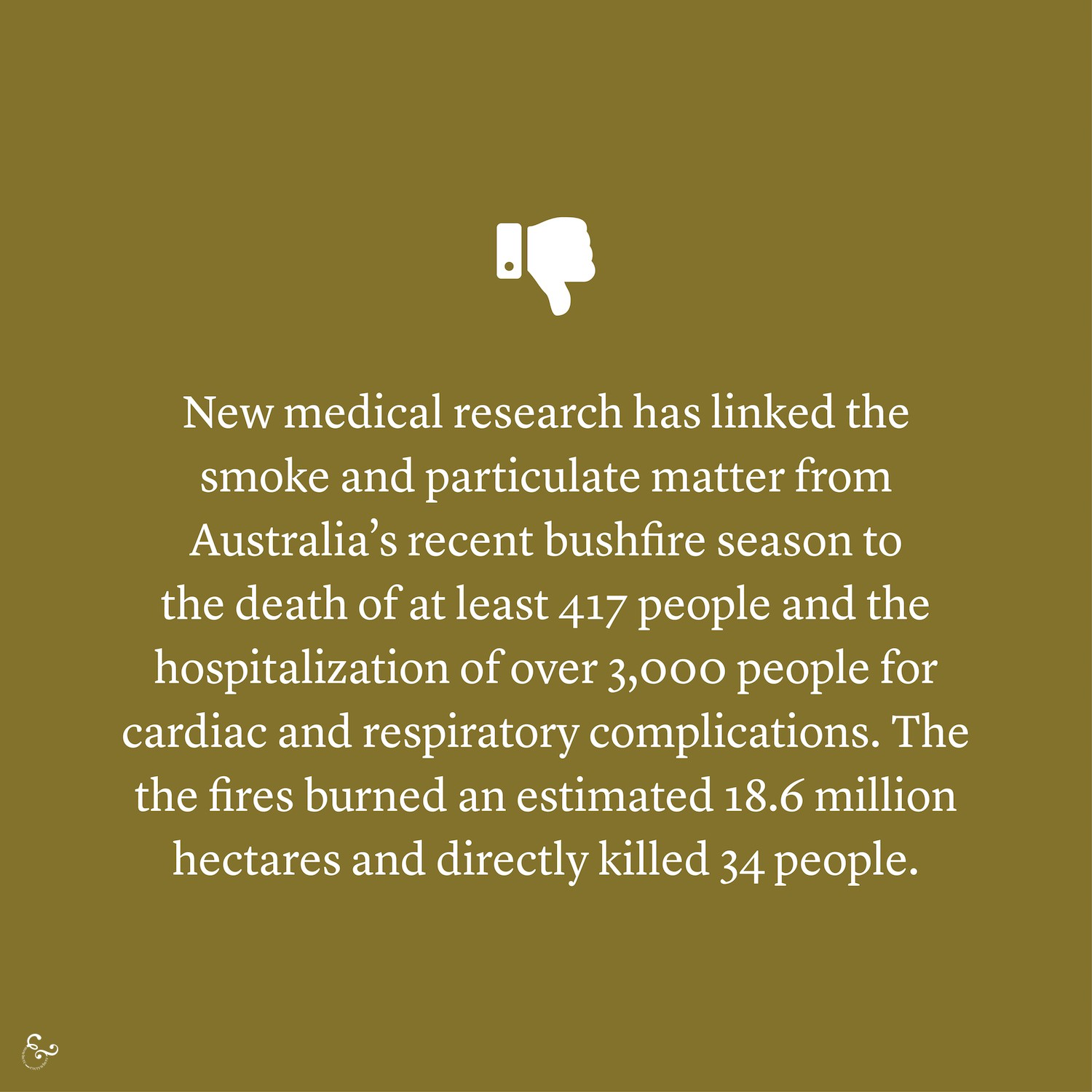 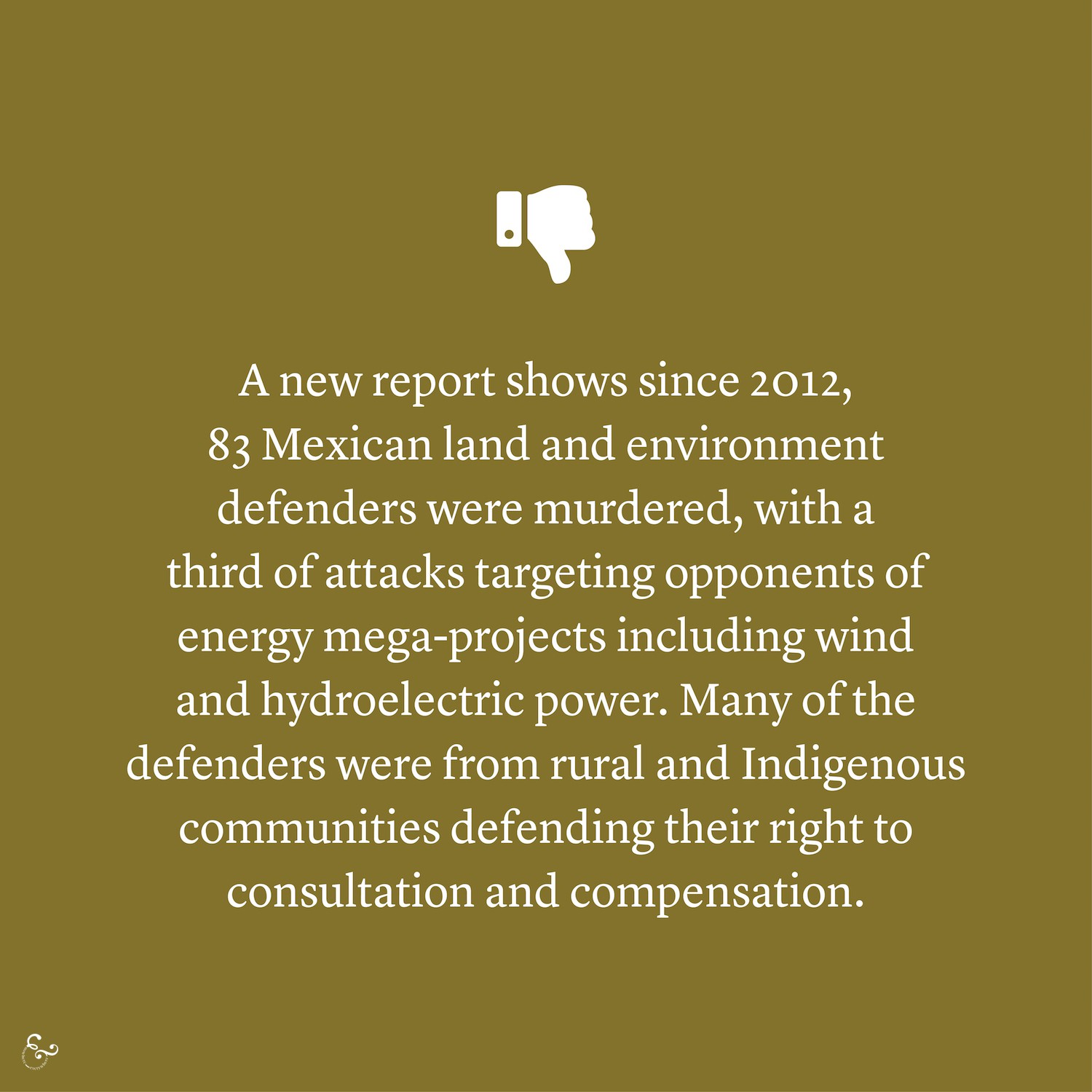 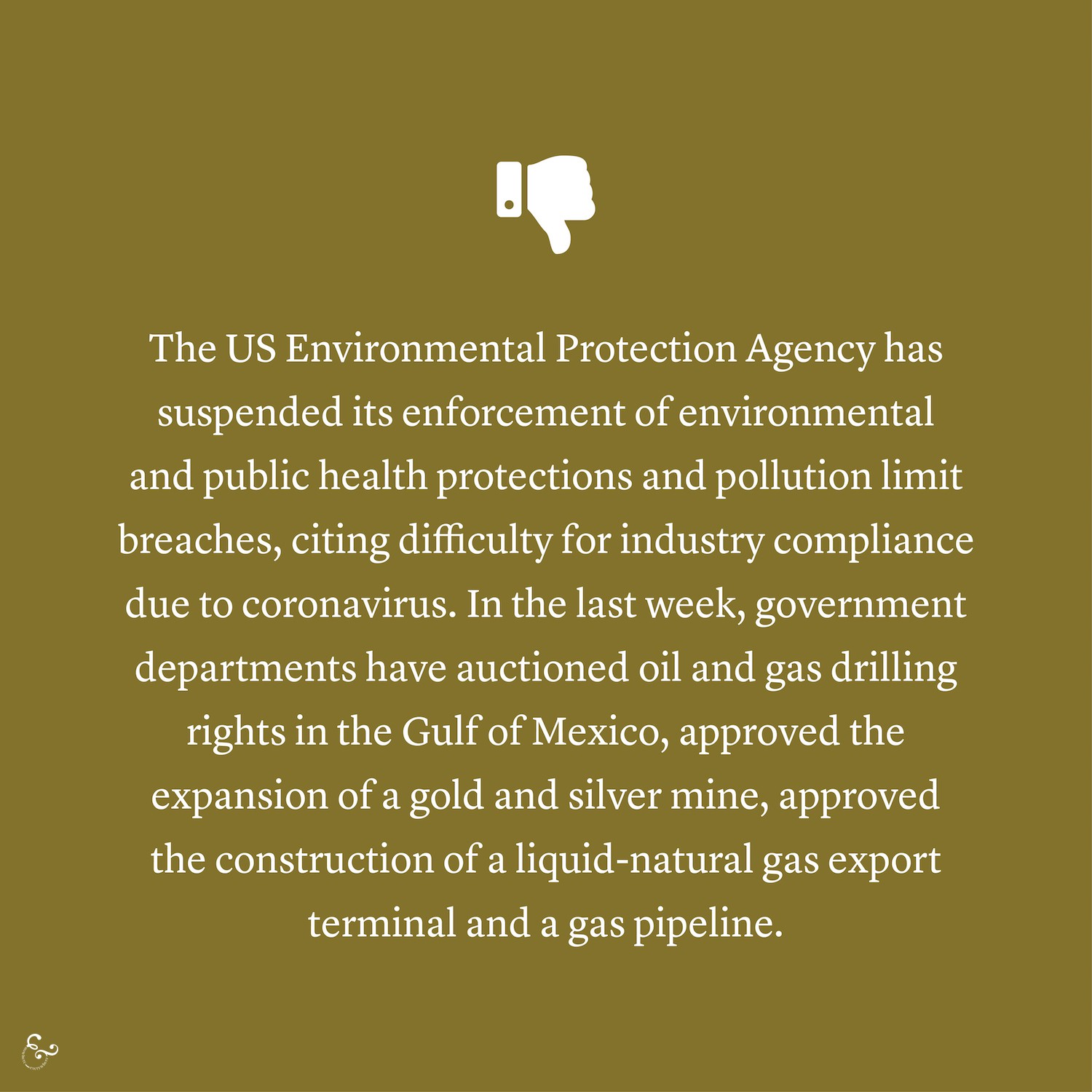 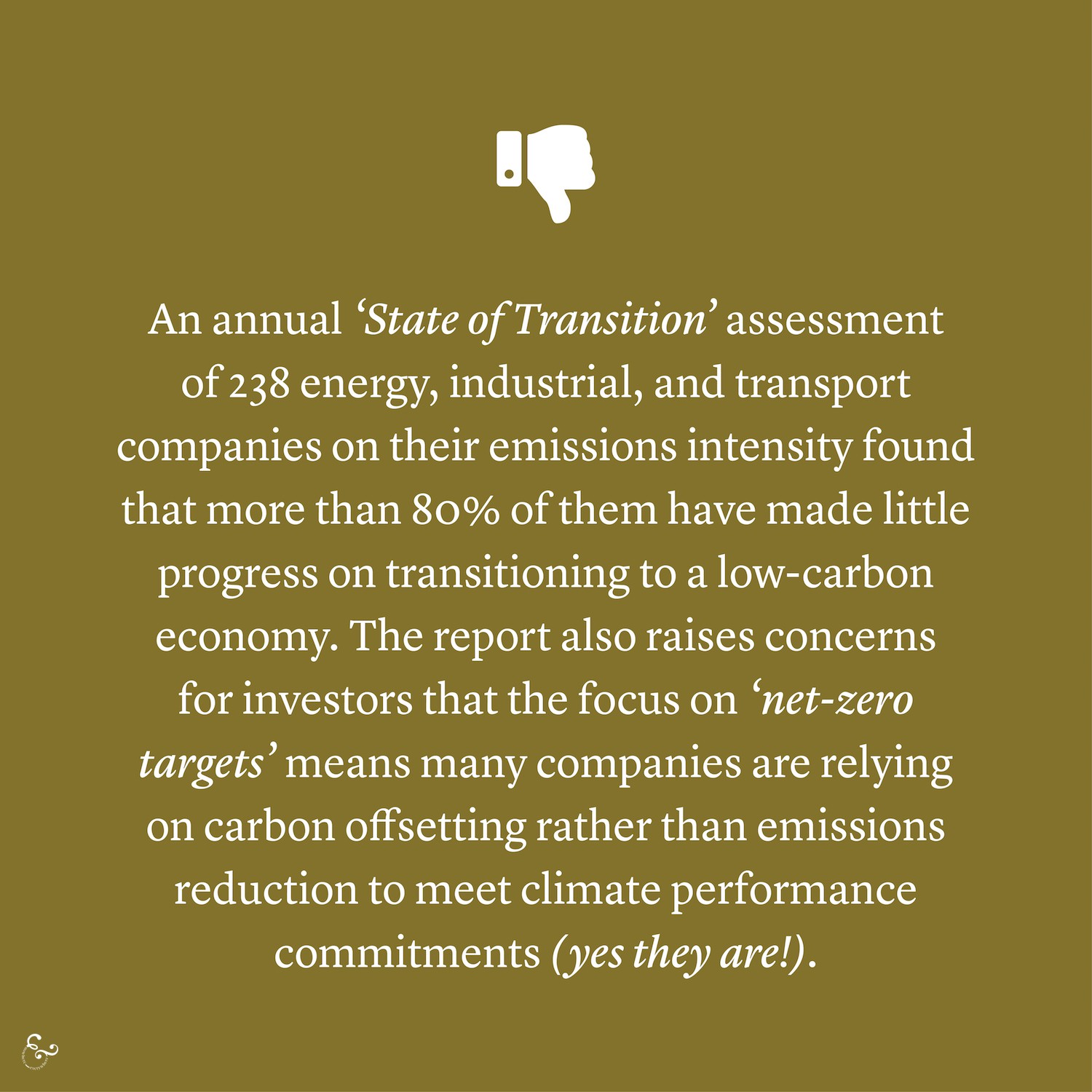 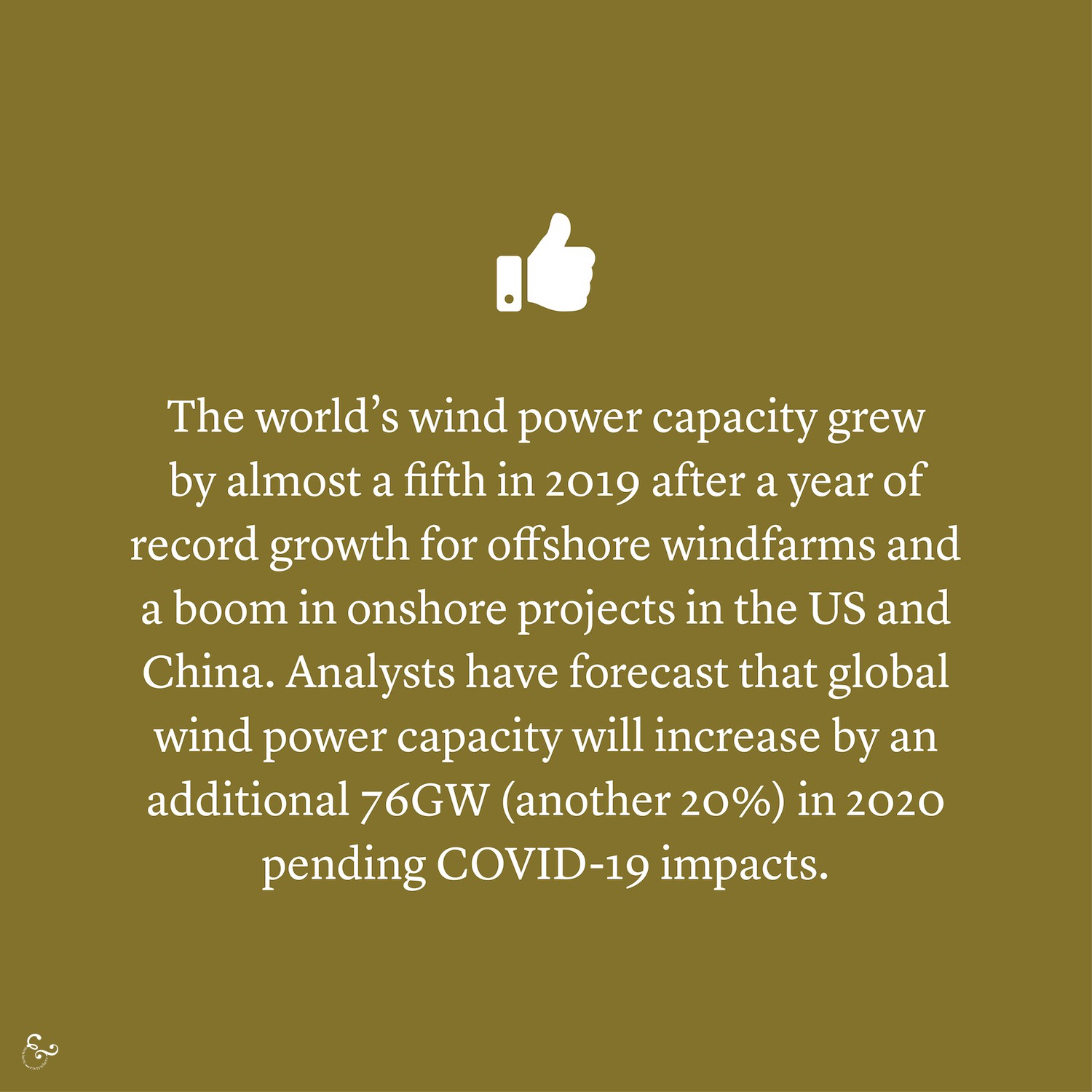 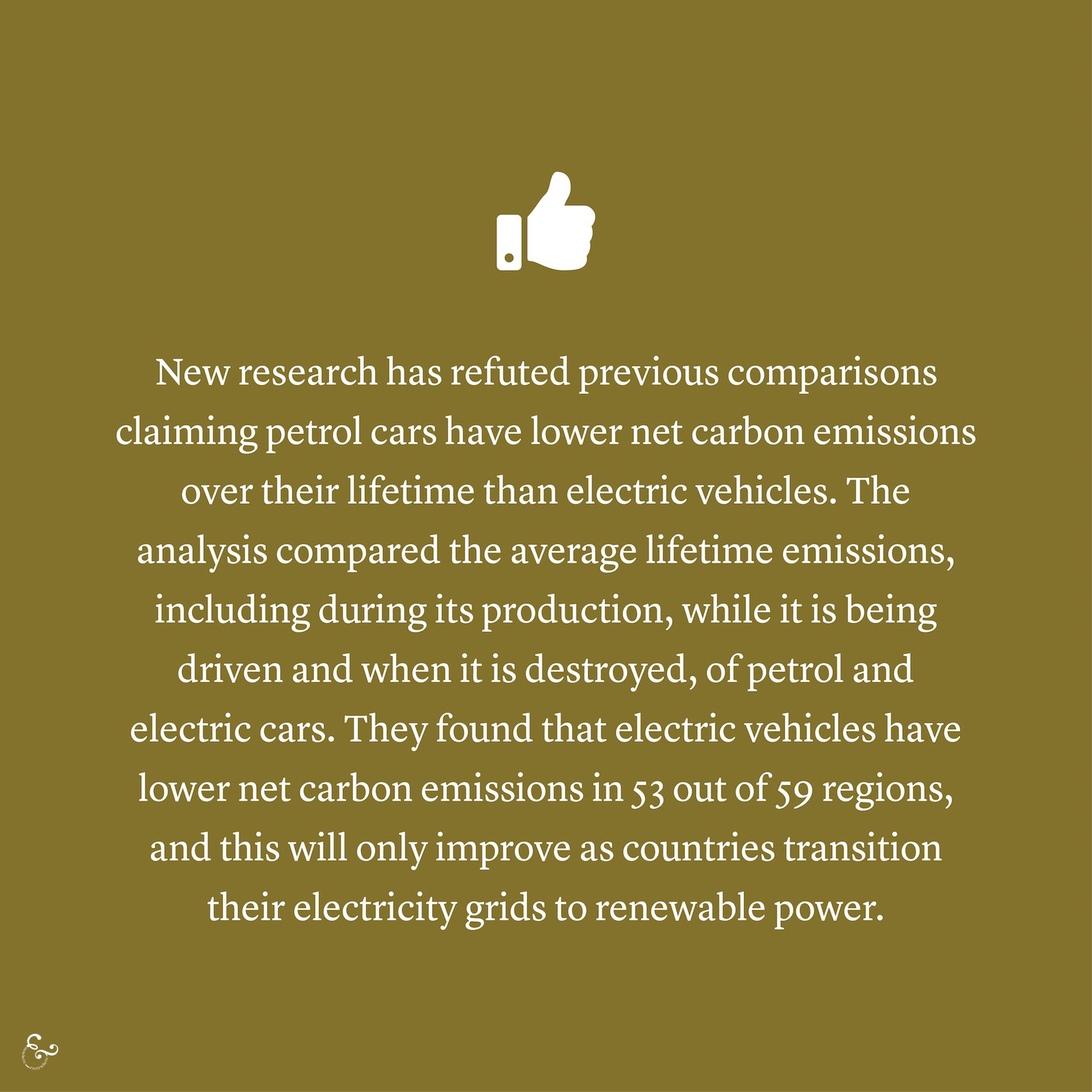 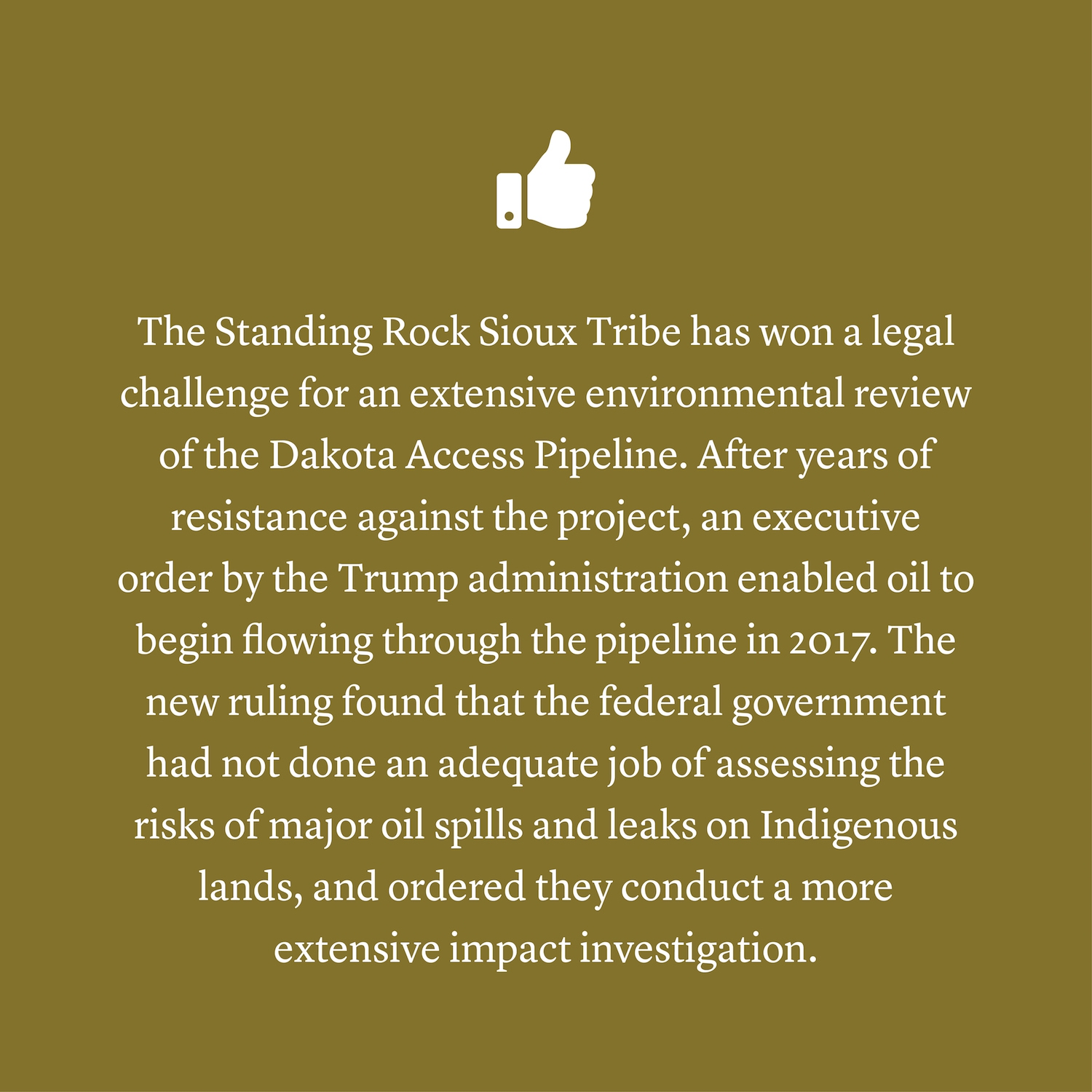