In 2009 I camped through Africa, long before I ever travelled with proper photography gear, and had a wild experience with gorillas. It changed how I viewed animals. And started the slow process of turning me into a bit of an environmentalist. Here’s a story I wrote in the weeks after the trek. 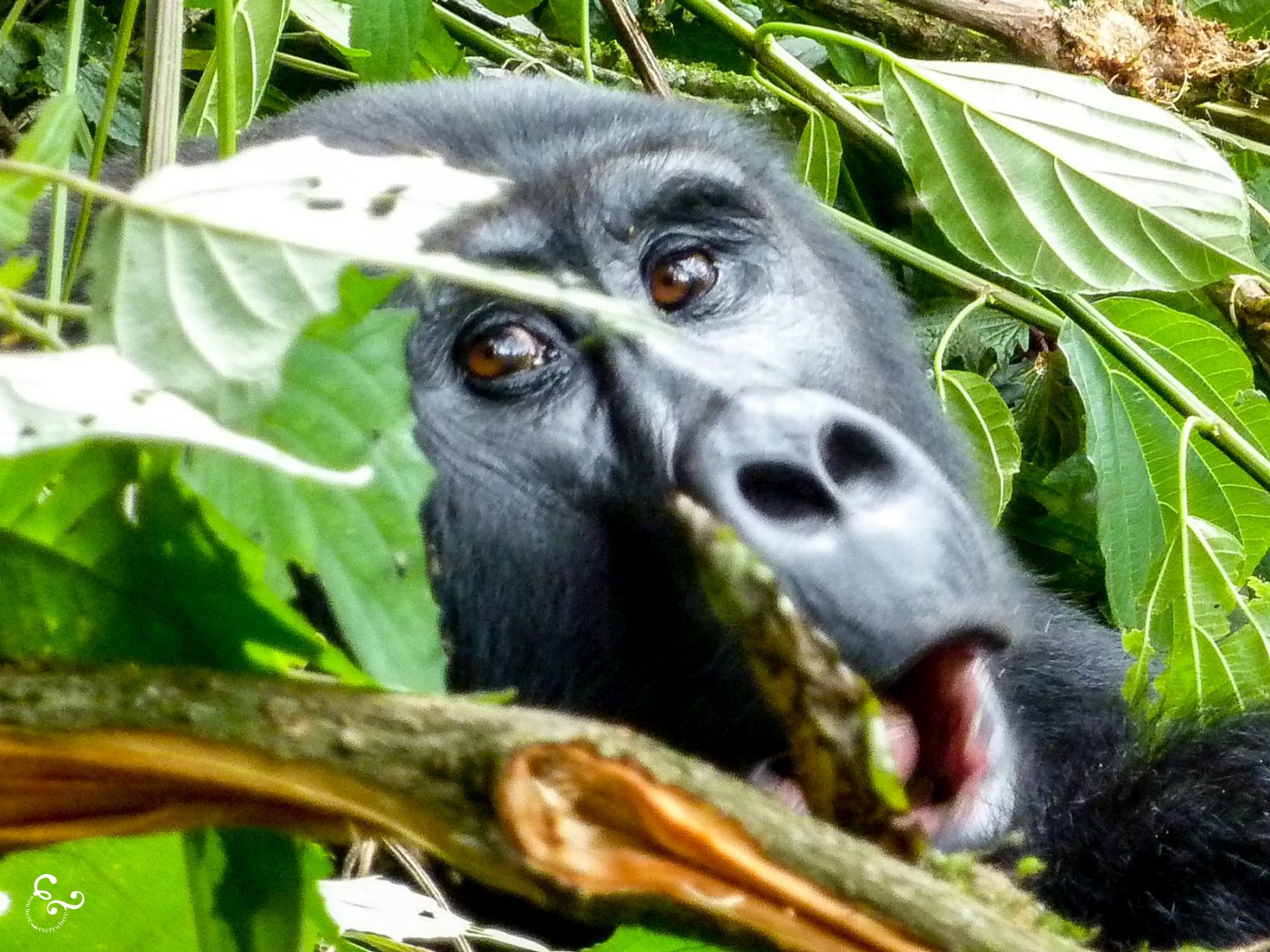 lt’s the kind of cold that hits you when you’ve just scrubbed your face with peppermint infused gel and step into the fresh air. A moment of unpleasant briskness flashes past and then you smile as your eyes awaken and your skin tingles. This is how it feels heading into the crisp air of tranquil Lake Bunyoni, Uganda at 5 in the morning to front (and first and foremost find) the powerful animals from which man evolved alongside.
Although embodied with a DNA sequence 98 ‐ 99% comparable to our own, these large primates weigh up to 200kg, knuckle walk predominantly on all fours and spend their life in the depth of complex, mountainous forest protected by luscious, green, thick walls of trees and hidden stinging nettle should a passersby trespass but for an hour a day when visitors are permitted entry to their asylum. Today was my day to accompany these beasts into their fortress of wilderness and I leapt into the waiting, small van alive with anticipation.
A seemingly endless, two hour, bumpy drive ensued as we climbed higher into the clouds; the spectacular scenery getting exponentially better with height as if Van Gogh himself had painted the landscape with the swish of his brush. The stillness of the surrounds was only occasionally interrupted by the shy yet gleeful laughter of bare bellied children who popped up along the roadside to wave or flash a sparkling grin lending only to the feeling of an eerily magical presence.
Finally (though I was to later discover this would be the shortest part of the journey), we reached the perimeter of Bwindi National Park. After a short briefing by armed locals, we began the haul into the Impenetrable Forest. The foreboding name leaving no doubts about the stronghold the mountains would have over us and yet leads you to believe it to be an understatement after only half an hour of hiking through heavy shrubbery and slippery mud. Given a carved branch to hold as a walking stick was a challenge in itself (usually preferring to watch these endeavors rather than embarking upon them) and after numerous attempts to maneuver over the wet ground akin to a water theme park, a “lucky” Australian man in the group assumed the ‘hand holding’ position for the following six hours which ensured he consequently wouldn’t feel his arms for a week.
Sweating, short of breath and wishing I’d set foot beyond the doorway of a gym prior to this excursion, I began what was dubbed as ‘controlled sliding’ down the muddy mountains. The essence of this is placing one foot in front of the other and gliding downwards ‐ not at all elegantly ­‐ into a splitz position that would rival the talent of a class of kindergarten ballerinas, until crashing into my guide before doing it all again. 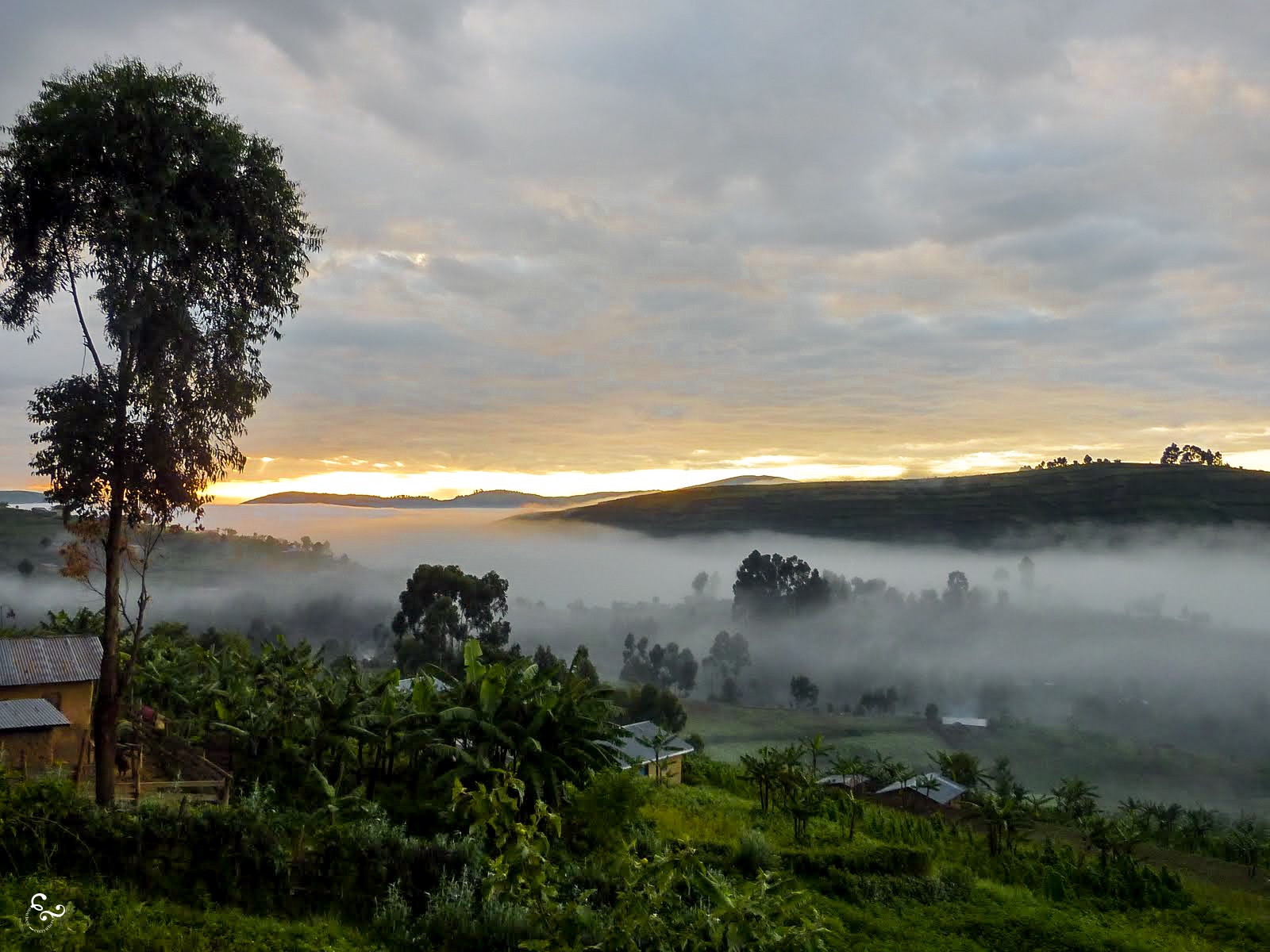 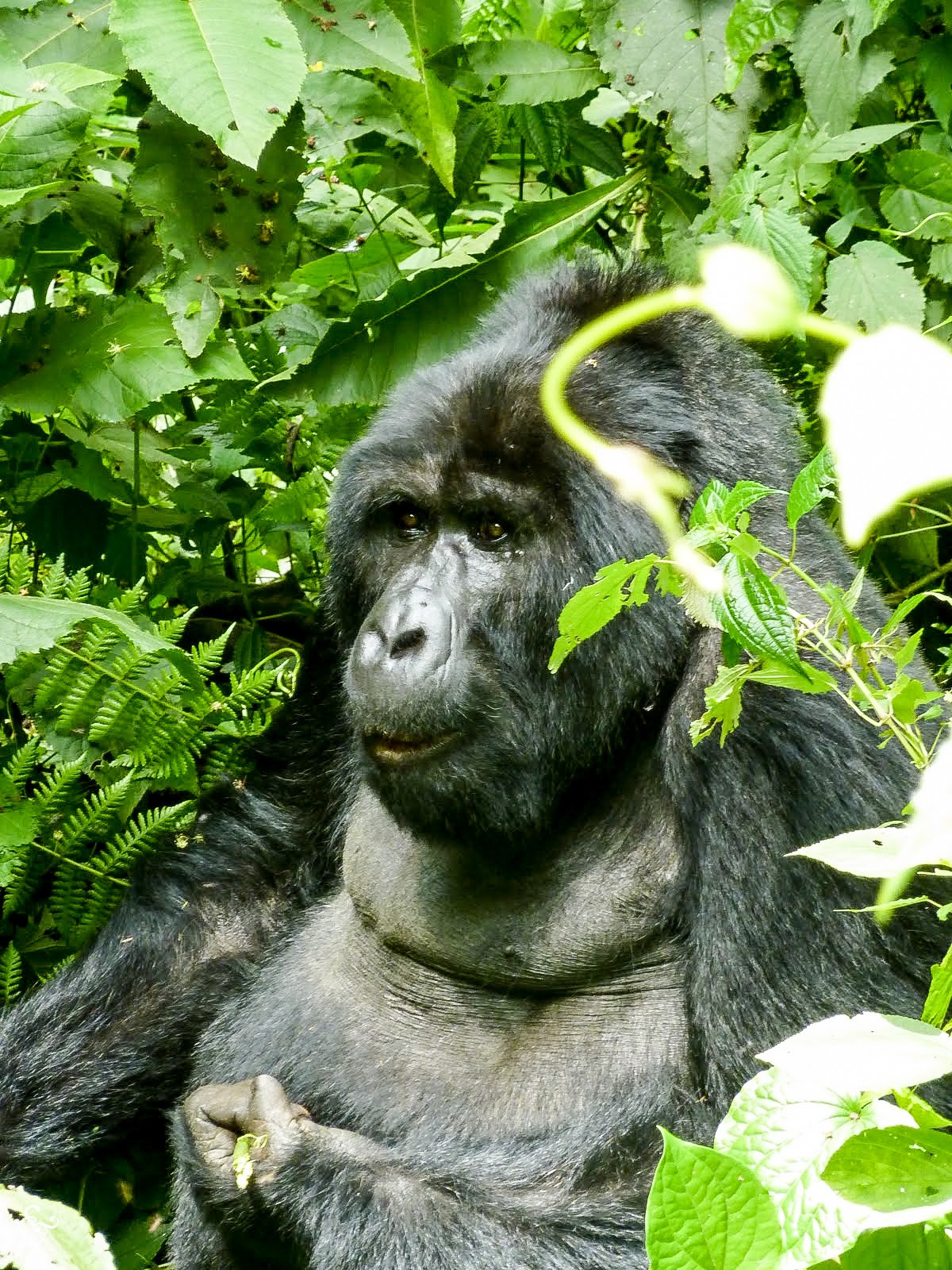 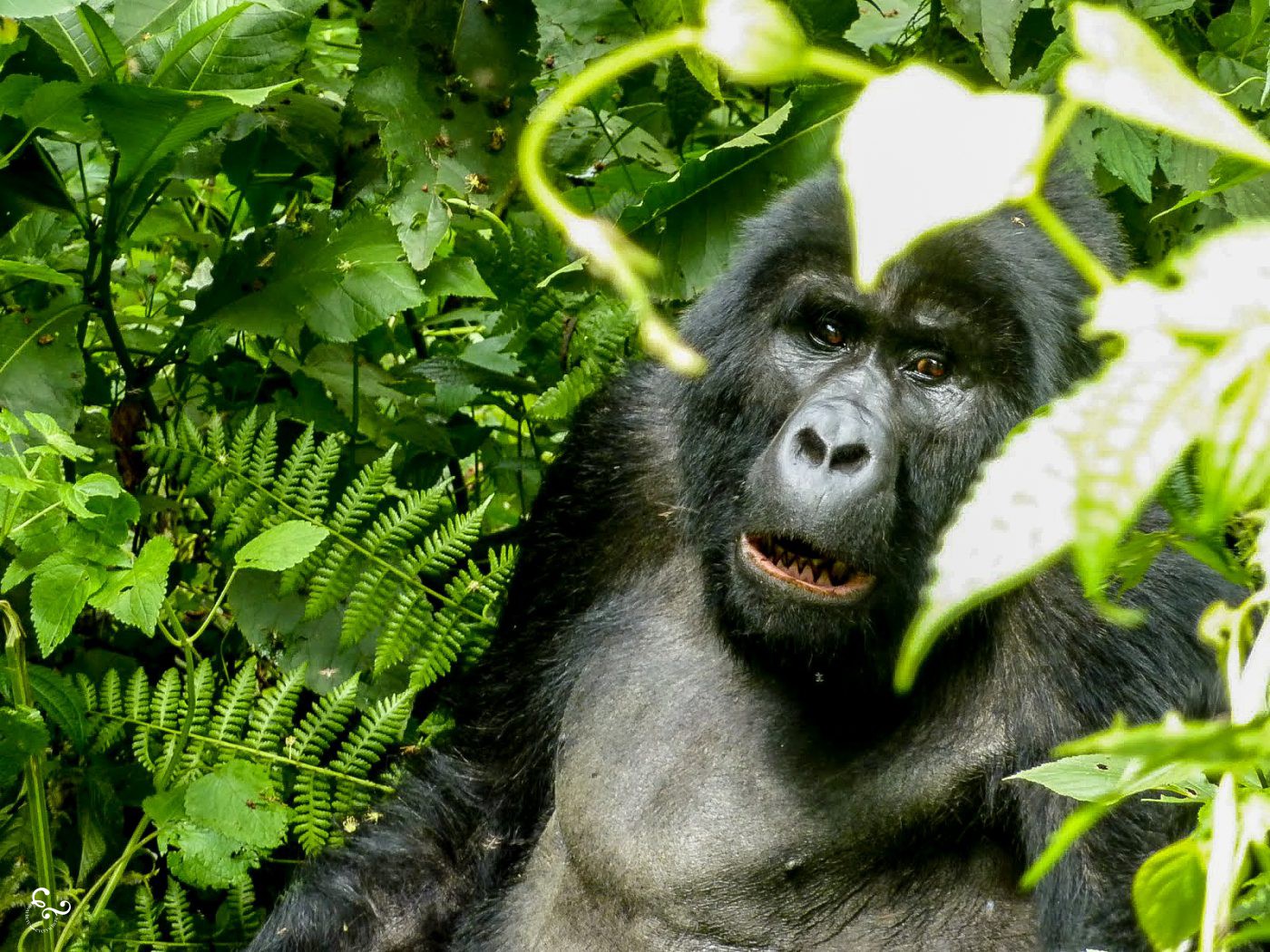 Red faced, panting and delirious, we finally glimpsed a family of wild gorillas the locals had been tracking well before we had commenced the morning’s journey now transitioning into early afternoon. With a sudden spurt of energy I bounced forward eager to see what lay behind the foliage. Gathered in a small group of eight and coming within 3 meters of these strong yet docile apes was breathtaking. We watched male gorillas swinging off trees and vines; babies clutching onto their mother’s backs for a free ride; Silverbacks pounding their chest in a scene one would only expect to come from Tarzan and all of them happily feasting on the green vegetation around them that had so become the enemy of my struggles.
Looking into their eyes and watching the ease at which they manipulated their fingers so like ours made me fall in love with these magnificent, innocent creatures. They didn’t seem to mind more flies hanging around them than a horde of shoppers at the word sale, and carelessly sauntered through the overgrowth with the approach of a lazy Sunday drive in the country. Following them, or rather jumping down the mountains to their canopies as walking was no longer an option my legs were considering, became a game these herbivores were knowingly taking pleasure in playing. Occasionally you would swear you saw the glimmer of a faint smile curling up on their pouted lips, revealing a set of sparklers while their big, brown, loving eyes pierced into yours daring you to acknowledge defeat.
After spending an hour in the presence of the foraging family (the maximum allowed so as to interfere as little as possible with their environment and well being) my joy slowly began to dissipate to dread at the thought of having to spend the evening finding a way out of this deep, green labyrinth. Our guides advised it was time (none of them showing any signs they had done anything other but go for a relaxing stroll) and began throwing about their machetes through the thick mountain woods to make our way out. By this time I conceded to the Impenetrable Forest and now provided much comedic entertainment for the other hikers whilst I fell through bushes by now in hysterical laughter, was stung to the hips with nettle and ended up waist high in sinking mud. Gasping out “I’ve lost my legs!” my savior turned around and lunged for my body, pulling me out before I slowly sunk to the core of the Earth (well, I imagine that’s what would have happened).
Collapsing in the green, and looking ever more like a gorilla myself, I lifted my body to face the final mountain before I would at last be out of the messy situation I’d climbed myself in. Grabbing hold of the good Australians’ hand we moved swiftly upwards. More accurately, he continued dragging me whilst I hoisted my cramped legs over colossal tree trunks lying horizontal across my path, dormant in defeat of a Ugandan wet season lightening storm. Two long hours passed and breathless and sweating we finally laid eyes on a red, dirt road. I’ve never been happier to see a sign of the modern world – the ecstatic look on my face would’ve been similar to if I’d happened to stumble up on Hugh Grant.
Crumbling with relief, exhaustion, happiness and wonder on the road, we waited for the cramped minivan (by all accounts a luxury in the heart of Africa) to take us back to what I had called home for the past number of days on the stunning, peaceful shores of Lake Bunyoni. Arriving back at campsite three hours later (having unknowingly taken the “tourist drive”), showering in the cold and shivering next to the open fire I took a moment to glance at the newspaper strewn across the table next to me. Ugandan Population Crisis screamed one headline proceeded by an article that at the current growth rate of 3.3%, the country would have residents exceeding 90 million by 2050. The opposing page was wholly dedicated to the newly raging civil wars in Rwanda and the Congo just across the border. Today I had conquered the forest and become acquainted with our rare ancestors of millions of years old, which would forever notch up as one of the highlights of my worldly experiences. For Africa and the near extinct 650 mountain gorillas left in Bwindi National Park, today was just another tale of survival. 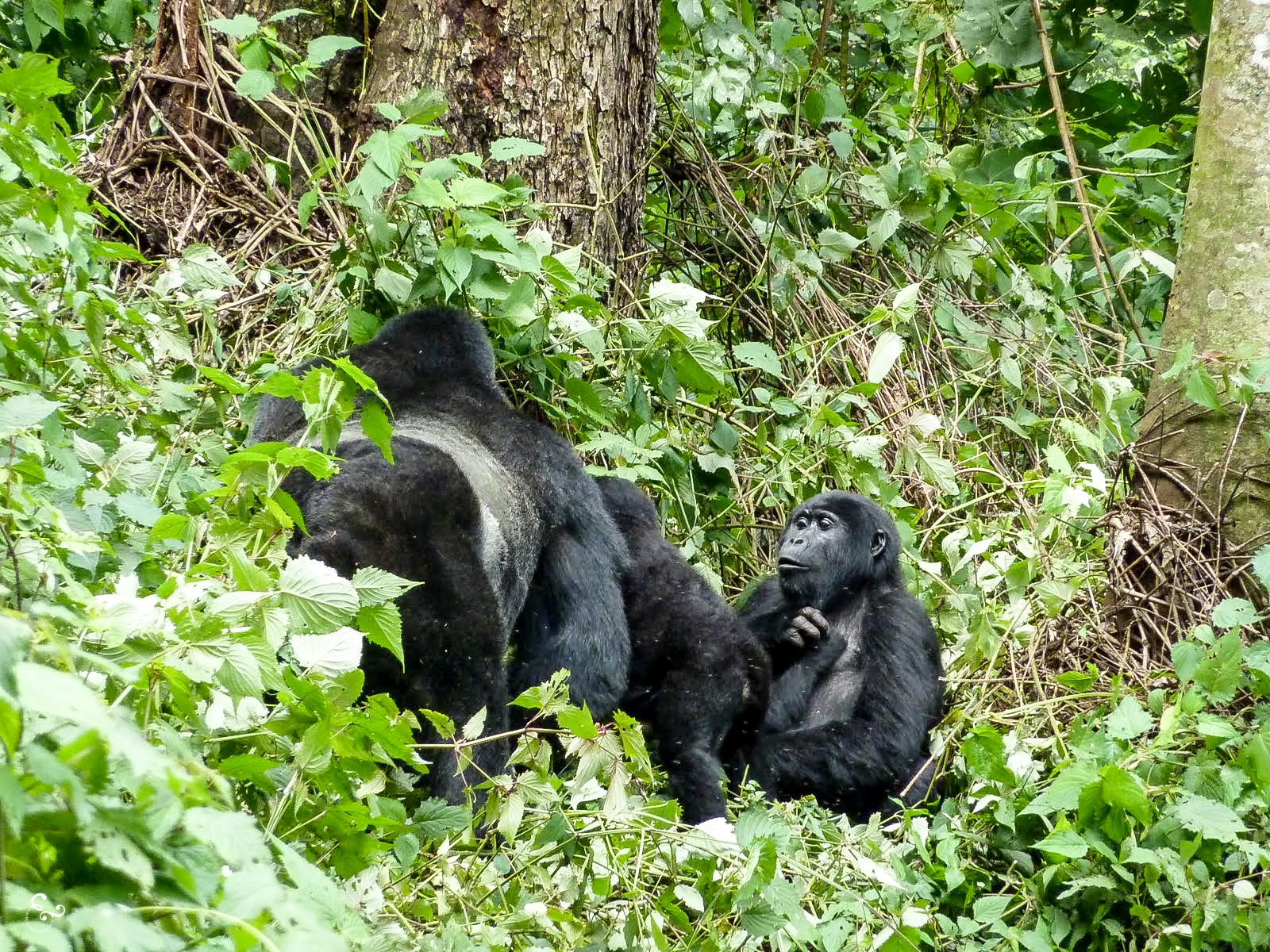 It’s now nearly a decade on and I think about this experience more often than nearly any of my journeys. Africa and its incredible apes, sit in my heart, forever.