Thousands of snow leopards once roamed Asia’s mountains. Today, only 4,000-7,000 snow leopards remain in the wild, with nearly 1,000 of those living in Mongolia – the second largest population in the world. Poaching, killings to protect livestock, and habitat loss have all contributed to their significant decline in global snow leopard populations over the past 15 years. This has been compounded by habitat loss due to Mongolia’s booming mining industry. The South Gobi Desert – the heart of snow leopard territory – is a major mining hub (Rio Tinto is building one of the world’s largest copper mines). ⁠
⁠
In 2009, Bayarjargal Agvaantseren learned about extensive mining operations in the Tost Mountains—an area that bridges two existing national parks in the South Gobi. Acting on behalf of the Tost community, she met with government officials to advocate that Tost become a federally protected area and collaborated with environmental journalists to launch a public outreach campaign. ⁠
⁠
In 2016, her advocacy resulted in the formal designation of the 1.8 million-acre Tost Tosonbumba Nature Reserve—the first federally protected area in Mongolia created specifically for snow leopard conservation. The reserve protects a core breeding population of snow leopards and forms a combined area of over 20 million acres of contiguous protected snow leopard habitat in the South Gobi.⁠
⁠
Although this was a major victory, numerous active mining licenses within the reserve were grandfathered in. Bayarjargal continued to pressure government authorities to cancel the remaining licenses to comply with the law. By June 2018, all 37 active mining licenses with the reserve had been cancelled. ⁠
⁠
Bayarjargal was able to shift perceptions of snow leopards among herder communities, who now see the animal as an integral part of their identity. For her advocacy and commitment, she recently won the prestigious Goldman Environmental Prize. Be like Bayarjargal!⁠
⁠
Source: The Goldman Prize 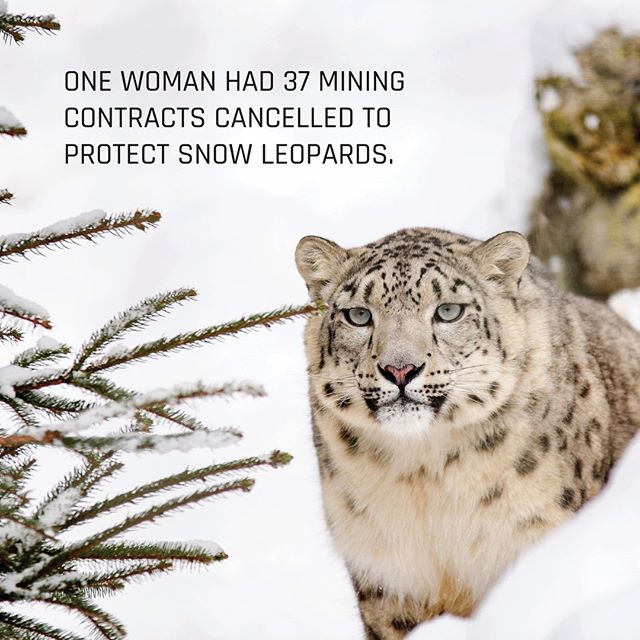