1/ In their annual greenhouse gas bulletin, the World Meteorological Organization says there is no sign of reversal of concentrations of key gases in the atmosphere driving up global temperatures. Carbon dioxide levels reached 405 parts per million (ppm) in 2017, a level not seen in 3-5 million years. Methane is the second most important greenhouse gas, and about 60% of it in the atmosphere comes from human activities like cattle farming, rice cultivation and fossil fuel extraction. Levels in the atmosphere are now about 1,859 parts per billion – 257% of what they were before the industrial revolution. Researchers also note the resurgence of banned gas CFC-11.

“The science is clear. Without rapid cuts in CO2 and other greenhouse gases, climate change will have increasingly destructive and irreversible impacts on life on Earth. The window of opportunity for action is almost closed,” said World Meteorological Organization (BBC / UN)

2/ An entire Arctic ecosystem suddenly started shrinking within the last 10 years and could be gone within another decade. The collapse could be the largest, fastest impact of climate change seen to date. (New Scientist)

3/ Massive 14-year oil spill ordered to be cleaned as leaks continue. Since the Taylor Energy’s oil platform was destroyed by Hurricane Ivan in 2004, the Justice Department estimates that it leaks up to 29,400 gallons, or 700 barrels, of oil per day, which would equate to roughly 150 million gallons total. It is feared to become the largest marine disaster of its kind in the nation’s history and is receiving attention from the U.S. Coast Guard after steadily leaking off Louisiana’s coast for more than 14 years. (Huffington Post / Washington Post / Watch Patriot Act)

4/ Scientists have found the first evidence of plastic contamination in freshwater fish in the Amazon. Tests on the stomach contents of fish in Brazil’s Xingu River, one of the major tributaries of the Amazon, revealed plastic particles in more than 80% of the species examined, including the omnivorous parrot pacu, herbivorous redhook silver dollar, and meat-eating red-bellied piranha. (The Guardian)

5/ In Yellowstone National Park, warming has brought rapid changes. Winters are shorter. Less snow is falling. Summers are hotter and drier. In a few decades, this iconic American landscape will not be the same. (New York Times) 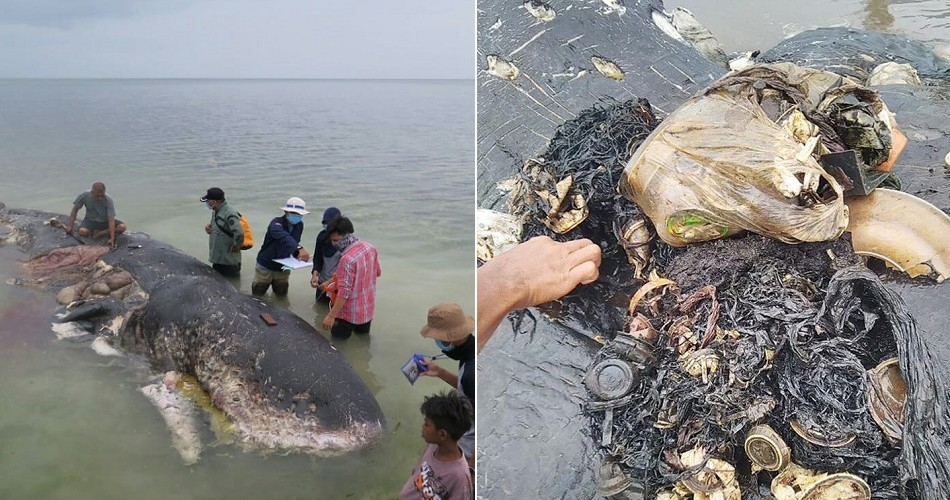 6/ A dead whale that washed ashore in eastern Indonesia had 5.9kg (13lbs) of plastic waste in the stomach containing 115 plastic cups, four plastic bottles, 25 plastic bags, two flip-flops, a nylon sack and more than 1,000 other assorted pieces of plastic. (The Guardian)

8/ Thousands of climate change protesters block London bridges. The Extinction Rebellion group said more than 6,000 people blocked the crossings to “raise the alarm” about the looming climate crisis. “People are risking their liberty in defence of the living world in very large numbers. It is only when we are prepared to take such action that people begin to recognise the seriousness of our existential crisis.” – George Monbiot. The group wants the UK government to commit to net zero carbon emissions by 2025 and reverse policies inconsistent with addressing climate change. (Independent / The Guardian)

9/ International auction house Bonhams has canceled an upcoming (and any future) sale in Hong Kong of rhino products amid mounting pressure from environmental groups including WildAid. The auction would have featured more than 20 antiques carved from rhino horn. (CNN)

9/ Indigenous groups in the Amazon have proposed (at the UN conference) the creation of the world’s biggest protected area, a 200m-hectare sanctuary for people, wildlife and climate stability that would stretch across borders from the Andes to the Atlantic. “This space is the world’s last great sanctuary for biodiversity. It is there because we are there. Other places have been destroyed.” (The Guardian)

11/ Plans to establish the first oil drilling operation in US Arctic waters have hit an ironic snag – a lack of sea ice caused by rapid warming in the region.  The ice thickness is required to safely transport gravel offshore in the Arctic. Last month, the Trump administration approved the go-ahead of the Liberty project to extract oil from beneath the Beaufort Sea, off Alaska’s north coast. The drilling would be the first of its kind in federal waters in the Arctic and follows Trump’s reversal of an Obama-era ban on fossil fuel activity in the polar region. Hilcorp has now added another year to its timeline; construction is set to start in 2020. (The Guardian)