The Club of Rome Report in the 21st century - Nowhere & Everywhere

In 1968 a group of scientists, researchers and business people formed in Italy as a global think tank to address the state of our environment, including global warming and our capitalistic economy that was increasingly reliant on growth. It’s premise was that the Earth was finite. They teamed up with researchers at the Massachusetts Institute of Technology (MIT), including husband-and-wife team Donella and Dennis Meadows, to create what was one of the first detailed computer modelling scenarios (World3).

Through their cutting edge technology at the time, the team modelled industrialization, population, agriculture (food production), resource depletion and pollution. They entered data up to 1970 and then projected a set of scenarios to the end of the twenty-first century. Their modelling showed that humanity urgently needed to take serious and immediate action on all levels. They surmized that the Earth was finite and our quest for unlimited (and of course unprecedented) population growth and material consumption would eventually lead us into a major crash. The study also warned that carbon dioxide (CO2) emissions would have a “climatological effect” via “warming the atmosphere”. In 1972 they published a book based on the research; Limits to Growth. They believed they could first inform, and then mobilize the world to act.

And in some places they did. My mum told me this story. An activist from the late 60s through the 70s (my dream years) and 80s, western Europe was experiencing the highs of economic growth. It was liberal, full of freedom, optimism and hope; particularly in our home of the Netherlands and countries surrounding us. My mum was part of a group that acted on the report. They were actively involved in the discussion around population, they lived in shared housing flats and reduced consumption, they helped set up community housing projects that created shared resources and efficiency (the one my mum most heavily worked on still exists today) and they set up what were known as Wereldwinkels (world shops) to take ethical, handmade products from the Global South and sell them in the Netherlands to benefit local artisans in countries hardest hit by our environmental destruction and resource depletion.

The book became somewhat of a bible to environmentalists like my mum at the time. It sold over thirty million copies worldwide but it also drew heavy criticism. Many people did not want to hear they had to reduce consumption, and governments and economic bodies had always believed that the way the free market system was created would always ensure environmental destruction was not around the corner (we have seen this fail dramatically of course).

That theory was amplified in 1979 when Jimmy Carter urged everyday citizens to decrease their consumption (without the notion of social justice).

“…too many of us now tend to worship self-indulgence and consumption. Human identity is no longer defined by what one does, but by what one owns. But we’ve discovered that owning things and consuming things does not satisfy our longing for meaning. We’ve learned that piling up material goods cannot fill the emptiness of lives which have no confidence or purpose”.

Carter lost the next election to Ronald Reagan.

In the late 1990’s Limits to Growth was further derided. Decidedly the hardest part of any projections to reconcile with back then were the calculations of food security compared to the explosion in population (most decidedly for example in The Population Bomb which predicted mass starvation). Many believed population growth would outstrip agriculture growth. What had not been entirely foreseen was our  industrial agriculture systems finding new mass scale so that we could feed billions more people (highly unsustainably with deforestation, land-use change, monocropping, run-off, soil erosion, toxic lands, and species loss of course but momentarily successful). Our pursuit of fossil fuels allowed for a booming population which was catered for by modified crops, intensive farming and major land-use change. The 1990s therefore saw a successful tsunami of population growth without predicted world hunger.

It is important to remember though that nearly one billion people are still undernourished and hungry even in the richest of countries like the United States (one in eight equating to nearly forty million people) and Australia (one in five children). This has largely been due to politics and war rather than food shortages. Perversely malnutrition on the other end of the scale (obesity & disease from foods) now exists for many millions of people (in OECD nations more than half of all adults are overweight or obese).

Other projections have proven consistent. The Club of Rome predicted diminishing per capita supply of services and food would cause a rise in the death rate from about 2020. We are now beginning to see how climate change is – and will – affects our crops across the world. Where I worked in Cambodia this year, we had a 40% harvest compared to standard years and the second sowing of rice was banned due to water shortages. This is likely to get worse.

In 2014, the University of Melbourne showed the Limits to Growth business-as-usual scenario has proven largely accurate thus far. They noted “there may also be evidence of global pollution beginning to impact food production (which is a secondary factor in the BAU scenario) in the recent occurrence of major droughts, storms and res (eg. Russia, Australia) that are potentially early impacts of global climate change driven by anthropogenic greenhouse gas emissions”.

The dotted line is the business-as-usual scenario predicted nearly fifty years ago, with the solid line our real data. 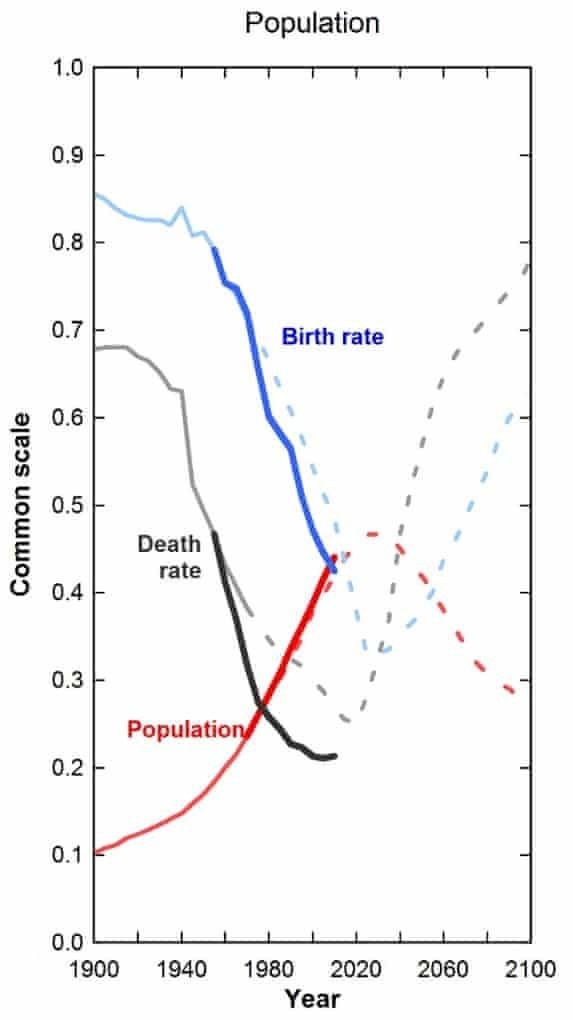 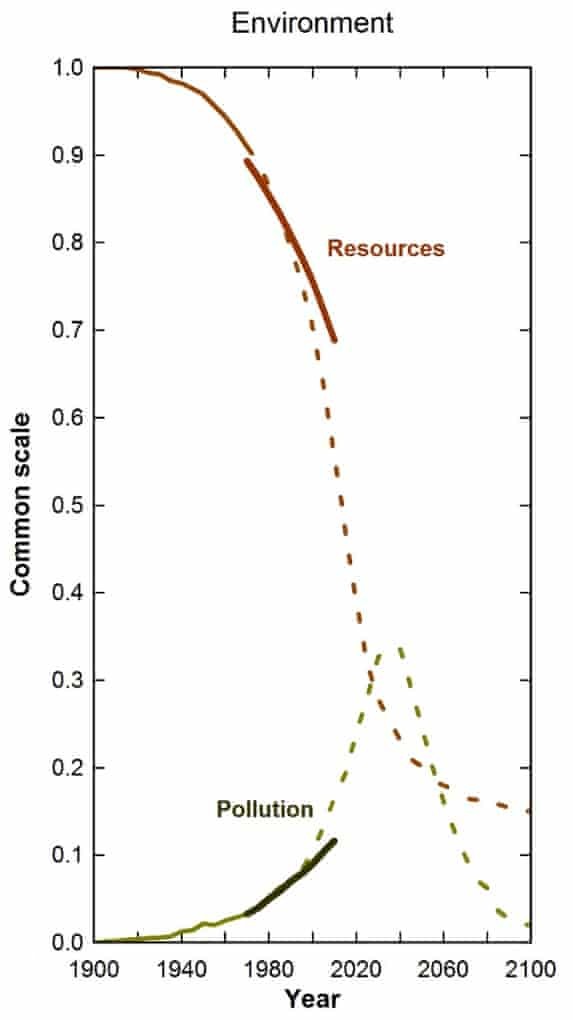 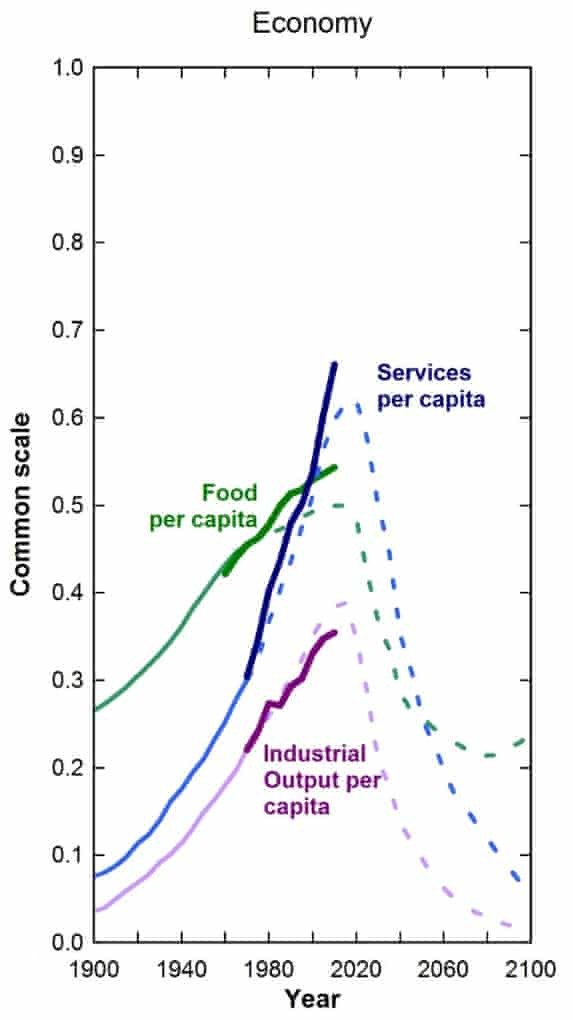 The Club of Rome report wasn’t the only warning at the time though. There were many more. A meeting between climate scientists at Woods Hole resulted in The Charney Report in the same year as Carter’s speech. It was the first comprehensive assessment of human-created global warming and its main conclusion was that the estimate of probable warming for a doubling of CO₂ to be near 3°C with a probable error of 1.5°C. We’re currently projected for over 4°C by 2100, within the Charney margin of error. Even if all stated policies were implemented today, we would likely hit 3°C.

In 1992 a document was signed by 1,575 of the world’s most prominent scientists (including 99 living Nobel laureates) and was sent to governmental leaders all over the world. It was titled World Scientists’ Warning to Humanity.

It began with, “Human beings and the natural world are on a collision course. Human activities inflict harsh and often irreversible damage on the environment and on critical resources. If not checked, many of our current practices put at serious risk the future that we wish for human society and the plant and animal kingdoms, and may so alter the living world that it will be unable to sustain life in the manner that we know. Fundamental changes are urgent if we are to avoid the collision our present course will bring about.”

It went on to address our groundwater depletion, water pollution, fishery exploitation and collapse, soil degradation, deforestation, biodiversity loss and unrestrained population growth. Two decades on we have exacerbated all these issues and addressed only the one other that was raised; the ozone layer. The letter outlined five areas that must be “addressed simultaneously” including a move away from fossil fuels to “more benign, inexhaustible energy sources to cut greenhouse gas emissions and the pollution of our air and water”.

We can even rewind all the way back to the late 1800s. Back then, a Swedish physicist – Svant Arrhenius – had already calculated the expected degree of warming without the use of computer models at all. His estimate is still very much in line with our current understanding. We’ve known this all for a very long time. Companies have known it. Scientists have known it. Governments have known it. We just haven’t acted.

Limits to Growth concluded that “If the present growth trends in world population, industrialization, pollution, food production, and resource depletion continue unchanged, the limits to growth on this planet will be reached sometime within the next one hundred years. The most probable result will be a rather sudden and uncontrollable decline in both population and industrial capacity.”

For us, that prediction half a century ago, is now playing out its second act for the next fifty years; often in line with what scientists are continuing to outline. We have a few decades to turn this ship around and we should have started yesterday. We have work to do if we don’t want these forecasts to become solid data. If we don’t succeed in this, for people like my mum, the Club of Rome report and the others that followed it will play out nearly exactly as they slated.